Travis Kelce had just three catches for 31 yards last week, yet he had every bit the profound impact on the Kansas City Chiefs' blowout win over the Denver Broncos that he had the previous week in Buffalo.

Even without the two touchdown receptions he had against the Bills.

You see, the two-time All-Pro tight end is still defining himself eight years into a career that has already produced five trips to the Pro Bowl and a Super Bowl title. 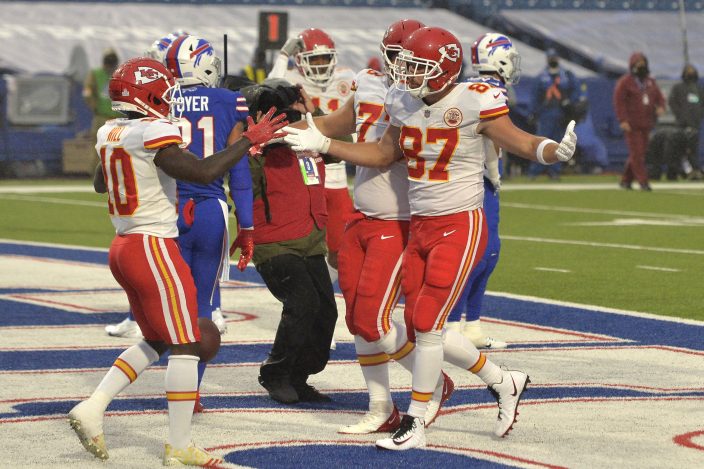 Once considered merely a pass-catching superstar in the mold of Jimmy Graham and Rob Gronkowski, the 31-year-old Kelce has emerged as a do-everything cog in the Chiefs' dynamic offense.

“He does it all,” said perhaps the biggest beneficiary, quarterback Patrick Mahomes. “He's hard for defenses to account for, and when you have guys like Tyreek (Hill) and Trav who create mismatches, it helps the entire offense out.”

The latest do-it-all turn came while fullback Anthony Sherman was on the COVID-19 list. Without their lead blocker for a couple of games, the Chiefs moved Kelce into the backfield for a handful of plays and never missed a beat.

In fact, after rushing for a season-low 80 yards in a loss to the Las Vegas Raiders that snapped a franchise-record 13-game win streak, the Chiefs piled up 245 yards on the ground against Buffalo and went over 100 yards last week in Denver.

“It's at the tight end position you're asked to do so many things,” Kelce said Wednesday, as the Chiefs looked ahead to this Sunday's game against the winless New York Jets.

“You'll see me split out like a wide receiver, in the Buffalo game I've been in the backfield. I've been tight in, like the H-back, where you can move me around. I'm prideful. I'm technically the utility guy on the field. Whether you need a plumber or an electrician, I'm here for you."

That isn't always the case with bona fide stars.

But in a locker room that boasts a constellation of them, Kelce eschews any sort of ego in favor of a team-first approach. The only number he cares about is wins, though he has plenty of yards, receptions and touchdowns, and that leadership example has permeated to every corner of the room, affecting rookies and veteran newcomers such as Le'Veon Bell alike.

“In this offense you definitely have to be a smart football player, no matter what position you're playing,” Kelce said. “The tight end gets moved around a lot more than others, so you have to be locked into the game plan more than some others.”

Kelce still puts up numbers, of course. He had eight catches for 108 yards and a score against the Raiders, giving him 20 games of at least 100 yards — tied with Otis Taylor for second most in franchise history. Kelce also has 547 receptions, passing Dwayne Bowe earlier this season for second in Chiefs history.

On both lists, the only player Kelce trails is another tight end with a remarkable pedigree: Hall of Famer Tony Gonzalez.

“He's obviously a complete player — Pro Bowl player, All-Pro player, record-holder, all those things,” Chiefs coach Andy Reid said. “Every day he comes to work and that’s the part I like. He tries to get better at his game. He diligently works with Pat, he wants to get it right, all those things, and he wants to be the best. I can appreciate that, absolutely.”

NOTES: WR Sammy Watkins (hamstring), FS Armani Watts (illness) and RT Mitchell Schwartz (back) were held out of practice Wednesday. ... Several members of the Chiefs have made social media pitches to the Toronto Raptors to play their games in Kansas City next season if COVID-19 keeps the border with Canada closed. Among them is Mahomes, who recently bought a small interest in the Royals. “Kansas City is a great spot for any franchise to be,” Mahomes said. “You look at the support the Royals have, the Chiefs, Sporting KC. The fan base is crazy. They love sports, they love to be here. You see how the Jayhawks pack out that place every single week. You know that T-Mobile (Arena) would be a great spot for any NBA franchise.”