The Latest on Hurricane Zeta (all times CDT):

NEW ORLEANS — Hurricane Zeta is just short of being considered a major hurricane as it speeds toward storm-weary Louisiana with New Orleans squarely in its path. 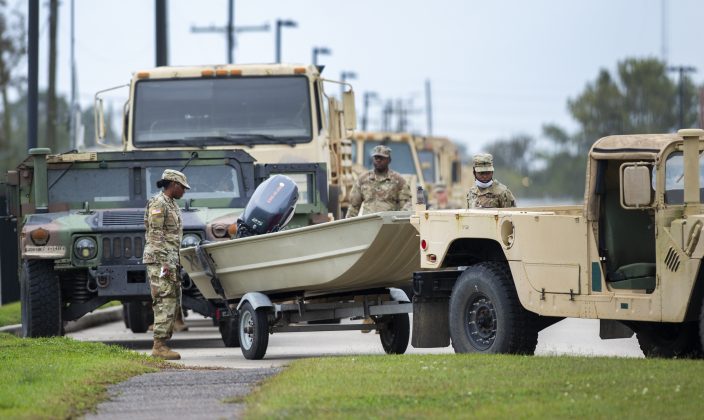 Dozens of boats trailered behind humvees are parked and ready to roll as Louisiana National Guardsmen gather in front of Jackson Barracks as the New Orleans area prepares for Hurricane Zeta on Wednesday, Oct. 28, 2020. (Chris GrangerThe Times-PicayuneThe New Orleans Advocate via AP)

Forecasters say the storm is expected to make landfall in southeast Louisiana on Wednesday afternoon.

If Zeta makes landfall with 110 mph (175 kph) winds it will be the strongest hurricane to make landfall in the continental United States this late in the calendar since the 1899 Halloween Hurricane hit South Carolina, according to Colorado State University hurricane researcher Phil Klotzbach.

Zeta is located about 60 miles ( kilometers) southwest of Grand Isle, Louisiana, and is racing north-northeast at 22 mph (35 kph).

Over the past couple decades, meteorologists have been increasingly worried about storms that just blow up in strength, like Zeta. They created an official threshold for this dangerous powering up — a storm gaining 35 mph (56 kph) in wind speed in just 24 hours.

Earlier this year Hannah, Laura, Sally, Teddy, Gamma and Delta all rapidly intensified. An eighth storm, Marco, just missed the mark. Laura and Delta tied or set records for rapid intensification. National Oceanic and Atmospheric Administration climate and hurricane scientist Jim Kossin studied the effect and found storms now are more likely to rapidly intensify than they did in the 1980s and “a lot of that has to do with human-caused climate change.”

ATLANTA — More than 20 north Georgia public school districts, including the state’s two largest, are telling students not to come to school on Thursday because of storm Zeta.

School officials are calling off school because of the fear of rain, wind and power outages from Hurricane Zeta as it makes its way inland. Many districts are telling students to work remotely by computer from home, with teachers also delivering lessons from home.

“This decision was made in keeping with our commitment to student and staff safety, with particular concern for our youngest bus riders,” the Cobb district said in a statement.