The numbers don't lie. Baker Mayfield has been a better quarterback for the Browns when Odell Beckham isn't around.

And now that Beckham's season is over due to injury, a theory has been hatched — supported by some interesting statistics — that Mayfield is better off without Beckham, who tore his left anterior cruciate ligament early in Sunday’s win at Cincinnati. 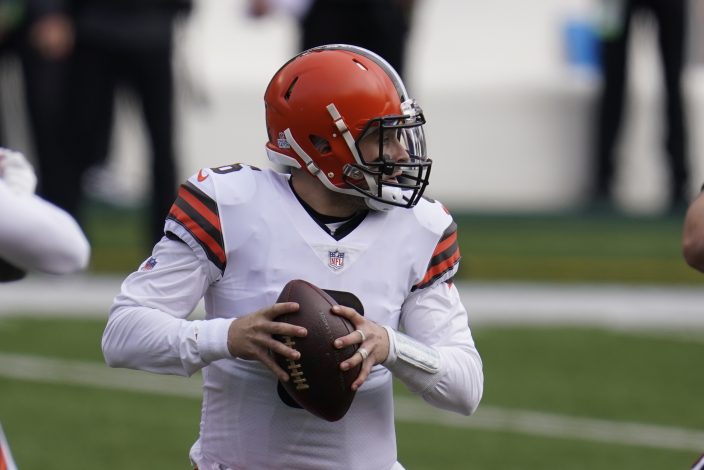 Cleveland Browns quarterback Baker Mayfield (6) looks to throw during the first half of an NFL football game against the Cincinnati Bengals, Sunday, Oct. 25, 2020, in Cincinnati. (AP PhotoMichael Conroy)

Time will decide whether it has any merit.

On Wednesday, Mayfield quickly dismissed the no-Beckham-is-better-for-the-Browns postulate during his Zoom conference call. 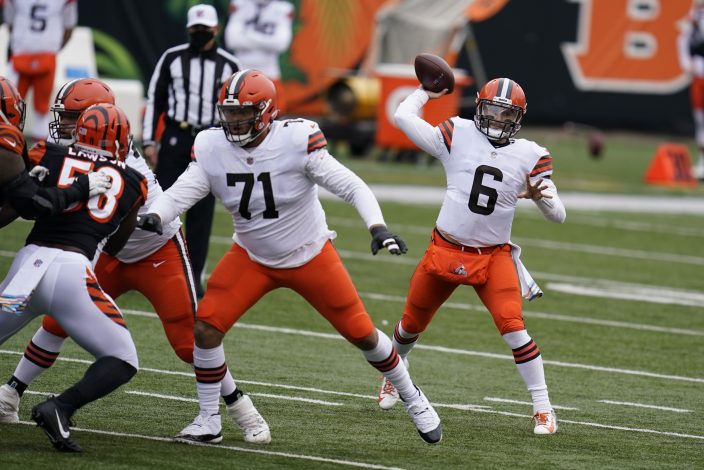 Cleveland Browns quarterback Baker Mayfield (6) throws during the first half of an NFL football game against the Cincinnati Bengals, Sunday, Oct. 25, 2020, in Cincinnati. (AP PhotoMichael Conroy)

“One, I think it’s just completely insensitive to a guy who just tore his ACL,” Mayfield said of the notion being kicked around town. “So I’m not even going to comment on it. You never want to lose guys. That’s where I’m going to leave that one.”

Stefanski also spurned the suggestion that Beckham, who had seemingly found his groove in his second season with Cleveland, is somehow holding Mayfield back. Stefanski doesn't think the QB will play any more freely simply because he won't feel pressure get Beckham the ball.

“I do reject that,” Stefanski said. “Odell is a great, great player, We’re going to miss him. I feel sick, still, without him in the building. But our offense is based on 11 guys and the quarterback going through his reads, and it was like that with No. 13 in there and it will be like that without No. 13 in there.” 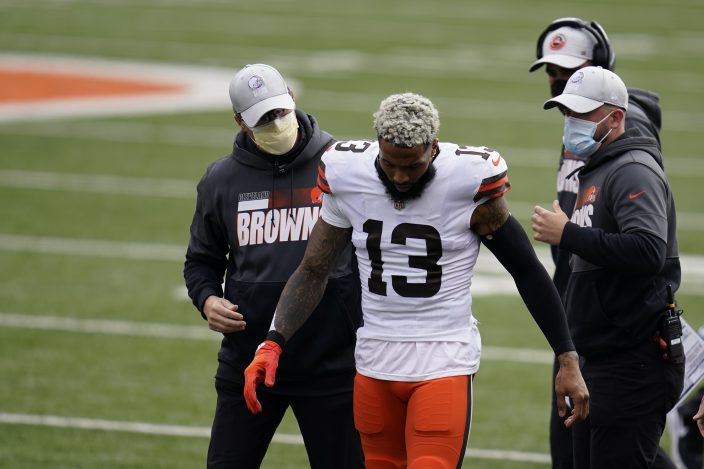 Cleveland Browns' Odell Beckham Jr. (13) leaves the field after being injured during the first half of an NFL football game against the Cincinnati Bengals, Sunday, Oct. 25, 2020, in Cincinnati. Browns star wide receiver Odell Beckham Jr. will miss the rest of the season after tearing a knee ligament during Sunday's 37-34 win at Cincinnati. (AP PhotoMichael Conroy)

Mayfield threw an interception on a long pass for Beckham that led to his teammate getting hurt trying to make a tackle Sunday. After the injury, Mayfield responded with 21 straight completions and five touchdown passes while looking more like the player who set a league rookie TD passing record in 2018 — before Beckham's arrival.

Two years ago, Mayfield had 27 TD passes and 14 interceptions. Last year, his first with Beckham, he threw 22 TDs and 21 picks and his completion percentage dropped from 63.8 to 59.4.

"I’ll just tell you I’d much rather have 13 on the field if available to us,” Stefanski said. “He’s not, so we’ll make sure we have a plan to make sure we can move the ball any which way we can.”

The Browns (5-2) get their first taste in two seasons of life without Beckham this Sunday when they face the Las Vegas Raiders (3-3). The loss of Beckham deprives Cleveland's offense of a weapon capable of stretching a secondary to its snapping point.

But Stefanski feels the Browns are deep enough to handle the loss.

“I trust the guys we have,” he said. “We will have multiple roles for some people because you are not going to just plug and play one person for Odell. I do not think that is realistic.”

Mayfield, selected as the AFC's Offensive Player of the Week, understands the Browns are going to have to adjust, much as they did when 2019 Pro Bowl running back Nick Chubb went down with a knee injury earlier this month.

If there's a silver lining in Beckham's injury, it's that the Browns have done this before.

"Without him, there might not be as many one-on-one opportunities, but that means we just have to be more efficient in zone coverages and things like that to make those plays.”

Higgins' role is expected to expand and rookie Donovan Peoples-Jones will likely get more playing time. Peoples-Jones entered last week's game without a catch, but he was the one Mayfield targeted with 11 seconds to go for the TD that put Cincinnati away.

“I missed him on a go-ball shot on a third down where they lined up offside, and I told him I was going to come back to him,” Mayfield said. "It just so happened to be that circumstance. I trust those guys, no matter who it is, to be where they are supposed to be, and he made an incredible play.”

NOTES: NFL sacks leader Myles Garrett didn't practice because of an ankle injury. Stefanski said the team was "just being cautious” with its defensive star but didn't provide any specifics on the injury. ... TE Austin Hooper (appendectomy) remains out. ... WR KhaDarel Hodge (hamstring) was designated for return from injured reserve and practiced for the first time since getting hurt in pregame warm-ups on Oct. 4 in Dallas.