Tua Tagovailoa's days as a student were recent enough that he remembers how to cram for a test, which is what he has been doing lately.

Newly promoted to the starting job with the Miami Dolphins, Tagovailoa didn't spend last weekend celebrating even though the team had a bye.

“I was here a lot,” he said at the team complex Wednesday. “I spent a lot of my time here just watching some film, but also working out. I got with some of the guys as well so we could work on some timing with certain routes.” 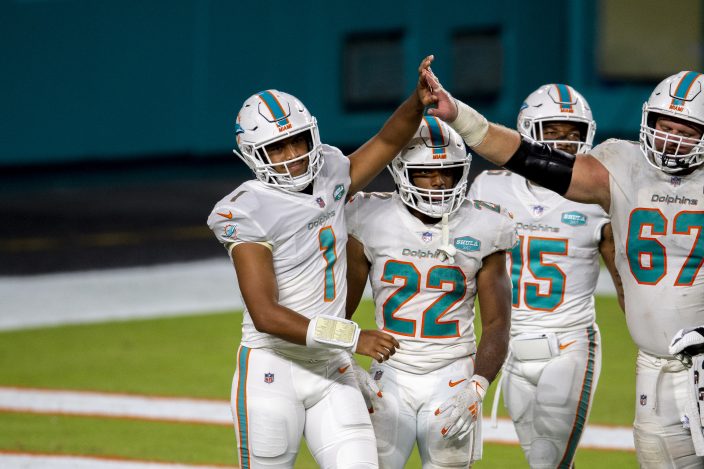 The test comes Sunday when Miami (3-3) plays host to the Los Angeles Rams (5-2). It will be Tagovailoa's first start since a serious hip injury ended his Alabama career nearly a year ago, and it's perhaps the Dolphins' most anticipated coming-out party since celebrity coach Nick Saban began his two-year stint with Miami in 2005.

Even so, Tagovailoa said, his world remains even-keeled.

“What helps for me is my family’s not too big on the hype and whatnot," he said. "It’s more so just being a good son for them. A lot of times when I come home or talk to my parents, they don’t really necessarily want to know how football went; they want to know how everything is with me as a person. 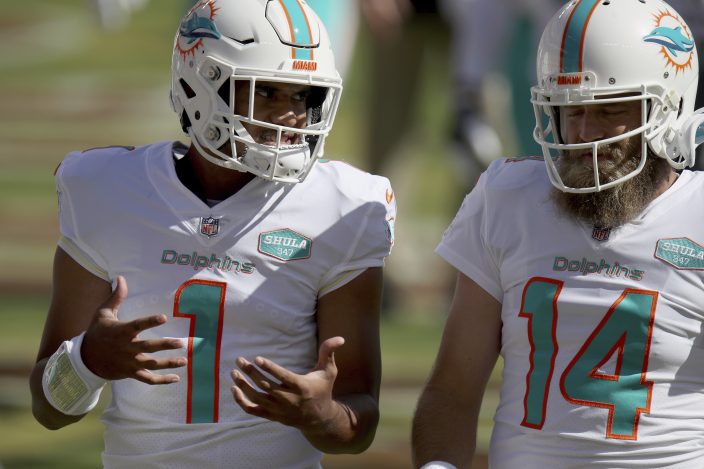 Miami Dolphins quarterback Tua Tagovailoa (1) and quarterback Ryan Fitzpatrick (14) talk on the field before an NFL football game against the San Francisco 49ers, Sunday, Oct. 11, 2020, in Santa Clara, Calif. Miami Dolphins coach Brian Flores says he regrets that his players found out about the team's switch to quarterback Tua Tagovailoa through social media rather than from him. And Flores says the decision to bench popular veteran Ryan Fitzpatrick was difficult.(AP PhotoScot Tucker)

“What also helps me are the coaches and my teammates. You get joked on and whatnot. I don’t think anyone here in this organization can get too caught up in any of the hype.”

While the rookie's profile in practice has changed, his demeanor hasn't, coach Brian Flores said.

“When you’re in there as the No. 1 guy, you assume a little bit bigger role,” Flores said. “That’s just natural to the position, and I think everyone knows that. He’s just being himself.”

Tagovailoa is touted as a potential franchise quarterback, and began to assume that role soon after the draft. He has worked hard to build bonds with teammates, even spending time grilling defensive players and assistant coaches regarding how he can improve.

“He has been a strong leader since he got in the building in July,” center Ted Karras said. “It's going to be an exciting weekend for us and for Miami Dolphins nation.”

Tagovailoa threw 87 touchdown passes at Alabama, but his professional resume shows two modest completions for 9 yards, both in mop-up duty as he made his Dolphins debut in their last game.

Nonetheless, he believes he's has studied enough, and is ready to run an NFL offense.

“My leadership plan is just to be the same Tua I've always been,” Tagovailoa said. “I don’t have to go out yelling at guys. That’s not the way I lead. I'm just going to be me.”