The play that launched one of the most impressive streaks in NFL history began innocently — or maybe menacingly is the better word — with James Harrison in full flight, his No. 92 a blur as he chased down Joe Flacco for a 12-yard loss on a sunny afternoon in Baltimore.

The meeting between the longtime Pittsburgh Steelers linebacker and the former Baltimore Ravens quarterback midway through the third quarter on Nov. 6, 2016, ultimately had little impact on the outcome.

Flacco and the Ravens withstood a late rally to hold off the Steelers for a 21-14 victory best remembered for Pittsburgh kicker Chris Boswell's botched onside attempt in the final moments. 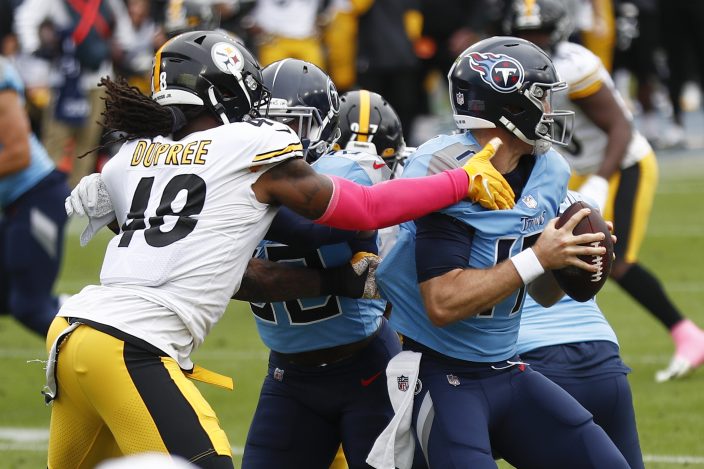 Still, four years later, not a game has passed in which the Steelers have failed to take down a quarterback. Pittsburgh extended its streak to 64 and counting after toppling Tennessee's Ryan Tannehill twice in a 27-24 victory last weekend that pushed the Steelers to 6-0 for the first time in 42 years. The Tampa Bay Buccaneers hold the NFL record, going 69 straight games with a sack between 1999-2003, an era highlighted by Hall of Fame defensive lineman Warren Sapp's swagger and Hall of Fame linebacker Derrick Brooks' smarts.

Pittsburgh can move closer to the mark when it visits the Ravens (5-1) on Sunday with first place in the AFC North on the line. All the Steelers have to do is slow down Baltimore quarterback Lamar Jackson. The reigning NFL MVP is one of the league's most dynamic players, equally as dangerous with his legs as he is with his right arm. Asked about the key to keeping Jackson “in check,” Pittsburgh coach Mike Tomlin is still looking for it. So are 30 other teams.

“I wish I had the answer to that,” Tomlin said. “I wish the National Football League had the answer to that. ‘In check’ is a strong term, one that I choose not to use. We’re just going to play to the best of our abilities, we are going to play within our personality, and we need to be on the details. We need to play fast and play collectively together and hopefully that is enough.”

It nearly was enough last season, when the Steelers sacked Jackson five times — still the most he's taken in 28 career starts — and picked off three passes before falling in overtime. While defensive end Cam Heyward took no solace in his group's effectiveness because Pittsburgh lost, Jackson is wary while playing behind an offensive line that has struggled to protect him. The Ravens have allowed 16 sacks through five games, already closing in on the total (23) it allowed in all of 2019 when Jackson was behind center.

Few have been over the last four years, a stretch in which the Steelers have reclaimed their status as the NFL's best pass-rushing team. The makeover began when Hall of Fame defensive coordinator Dick LeBeau was let go in January 2015 and longtime outside linebackers coach Keith Butler was promoted. Pittsburgh jumped from 26th in sacks in 2014 to fourth in 2015 and has finished at the top in each of the last three seasons.

It helps to load up on edge rushers, as the Steelers did by taking outside linebacker Bud Dupree in the first round in 2015 and Watt in the same round two years later. That kind of talent can make it easy to create chaos in the backfield. Maybe the most impressive thing about Pittsburgh's streak is how frequently its rushers are getting home. The Steelers have only finished with one sack in a game nine times during their run while collecting at least five sacks in a game 16 times.

“I think it’s just our level of discipline, understanding rush lanes,” Heyward said. “Guys are watching film on their own and then we’re collectively talking about how we want to rush a guy, what we want to do in certain situations. But you’ve got to have that cohesiveness and a group of guys willing to do that. It can’t just be one guy, one cowboy just trying to do his own show.”

Twenty-six different players have combined for 206 sacks during the streak, from former Defensive Players of the Year such as Harrison to Pro Bowlers like Watt to journeymen like former defensive end Ricardo Mathews, who had the fifth and final sack of his three-team, seven-year career when he drilled Eli Manning in a 24-14 win over the New York Giants in December 2016.

“It requires a lot of guys not only sacrificing to do what’s good for the team but also just understanding that we have to have our rush lanes and we have to have the ability to cover up those big lanes,” Heyward said. "Because you’re going to get torched if you don’t.”

No player in the league can set defensive game plans afire quite as quickly as Jackson. And the Steelers know it, streak or no streak.

“Guys got to make tackles," Heyward said. "Because if you don’t, that dude is going to hit you for a big one.”