Blake Snell spent nearly 10 minutes discussing a disappointing end to the World Series before concluding with a message to the rest of the Tampa Bay Rays.

“I just hope the guys understand we should not be OK with taking second,” the 2018 AL Cy Young Award winner said. “We’ve got to find a way to be better for next year and come into spring training hungry.” 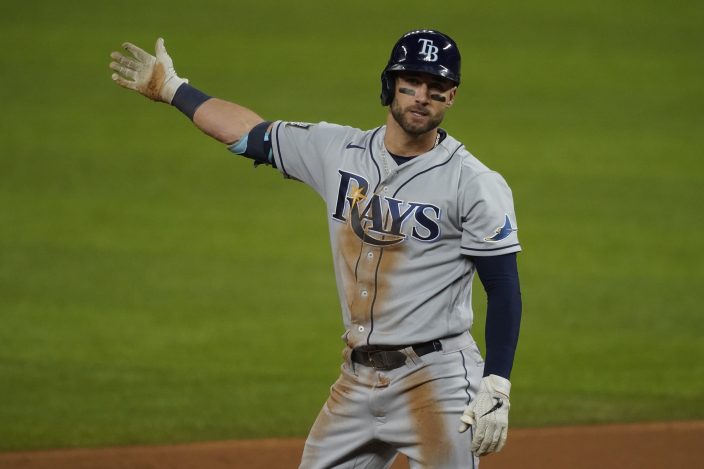 Tampa Bay Rays' Kevin Kiermaier reacts after his double against the Los Angeles Dodgers during the second inning in Game 6 of the baseball World Series Tuesday, Oct. 27, 2020, in Arlington, Texas. (AP PhotoTony Gutierrez)

What’s not clear moving forward is how much a deep playoff run during a shortened season played in empty stadiums due to the coronavirus pandemic will help the franchise’s efforts to get a new home to replace Tropicana Field.

With the blessing of Major League Baseball, principal owner Stuart Sternberg is exploring the prospect of eventually splitting home games in new stadiums that would be built in Montreal and the Tampa/St. Petersburg area.

The Rays routinely rank at or near the bottom of the majors in attendance, even during seasons in which they make the playoffs.

The team’s lease at Tropicana Field runs through the 2027 season.

And if the past is any indication, reaching the World Series for the first time since 2008 may not impact attendance significantly once fans are allowed to return to the stands.

The Rays made the playoffs four times within a span of six seasons from 2008 to 2013. On two of those occasions, attendance rose slightly the following year. Support dipped after the other two, including by more than 4,100 per game in 2011.

They also earned a postseason berth a year ago, when they averaged 14,552 per game.

Kevin Cash’s aggressive and, at times, innovative managerial style helped the Rays fashion an AL-best 40-20 record during the regular season. It also backfired when he removed a dominant Snell from Game 6 with the Rays leading 1-0 in the sixth inning.

Cash lifted Snell after the starting pitcher yielded his second hit of the game. The Dodgers broke through against reliever Nick Anderson and closed out the series with a 3-1 victory.

Cash insisted if facing the same situation again, he’d still trust Anderson and the rest of Tampa Bay’s bullpen to get the job done.

He said the move simply didn’t work out.

“We’re proud of what was accomplished this year. Did we get to where we wanted to? Not quite,” Cash said. “But this team had high expectations. ... We came a little bit short.”

The manager said the tone of their comments generally was the same: the Rays had no reason to hang their heads over the outcome.

“The Dodgers played better than us. ... We got beat fair and square,” Kiermaier said.

“I’m not sad. I’m not disappointed,” the defensive whiz added. “I’m so proud of everyone in our whole organization for what we accomplished.”

While much of Tampa Bay’s roster is likely to return next season, veteran pitcher Charlie Morton’s future is up in the air. The right-hander turns 37 next month and isn’t sure if he’s played his final game with the team. The Rays have until five days after the World Series to decide whether to pick up a $15 million option on the two-year contract Morton signed as a free agent in 2019.