San Francisco’s secondary has been decimated by injuries. Top edge rushers Nick Bosa and Dee Ford haven’t been on the field for weeks.

Yet the 49ers defense has still managed to perform at a high level almost every week thanks in large part to the play of middle linebacker Fred Warner.

Warner has been the main reason why his unit hasn’t faltered despite starting 22 players on defense while dealing with injuries to the entire starting secondary, as well as several front seven players. 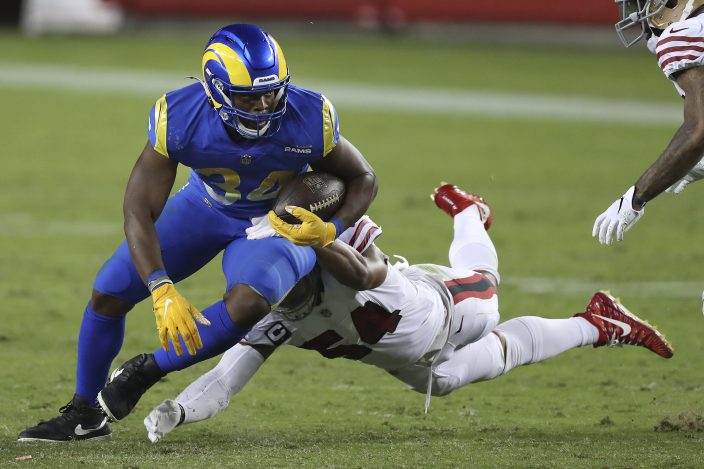 “I’ve always almost held myself to the highest standard,” Warner said Wednesday. “I’m the one in the middle, the one that everybody is looking at every single day, every play. So as long as I’m on point, I know that we can continue to get better and better. I got a great group of guys around me and they make it easy on me for sure.”

But it’s Warner who makes it easier on everyone else with his versatility to excel in coverage, against the run and as a blitzer.

He also has an outstanding ability to diagnose plays and get the Niners into the proper defense no matter the situation.

“He’s special. He’s special in the sense that he recognizes things that are happening on the football field,” defensive coordinator Robert Saleh said. “He recognizes things on tape. You can put a lot on his plate in terms of getting people lined up and making checks and getting us into the right defense. That gives you flexibility as a play-caller and as a coaching staff to know that you can create a defense that’s designed to be with different layers of checks, that will help us be in the right defense based on what the offense shows.”

The Niners have always believed in Warner ever since he arrived as a third-round pick out of BYU in 2018. He has started every game since entering the league and his teammates believed he was overlooked when it came time for awards last season when he helped San Francisco reach the Super Bowl.

Some have bestowed him the nickname “All-Pro Fred” and his play has gotten others on board with CBS analyst Tony Romo calling him the “best linebacker” during last week’s broadcast and saying he was unable to find any flaws.

“He’s the quarterback out there,” coach Kyle Shanahan said. “The calls he makes, all the confusing things that people do offensively with the motions and change of strengths and how he gets us lined up. When you play zone defense a lot, you better have some good guys inside who look at the quarterback and I think Fred is as good as anyone.”

Warner excels at almost every aspect of the position. After playing mostly a nickel back role in college, Warner is one of the best coverage linebackers in the league with the 55.9 rating he’s allowed on throws in his direction ranking second best among all linebackers, according to Pro Football Focus. He already has two interceptions, including one last week against New England’s Cam Newton.

He’s been used as a blitzer during his career and had three sacks last season and generated an impressive nine pressures on his 26 pass rushes this season, according to SportsInfo Solutions.

Seattle coach Pete Carroll sees similarities to his do-everything linebacker Bobby Wagner, who has been a big part of the Seahawks success the past decade.

“He’s just kind of taken over from the start,” Carroll said on a conference call. “He’s been such an active player run and pass and so available to make plays because he’s such a hard worker and a great reader and an instinctive guy. You can’t watch the defense and not see him. He just jumps out at you. It’s been cool to see him really ascend so quickly.”