Cory Burke scored on a header in the 65th minute and the Philadelphia Union beat the Chicago Fire 2-1 on Wednesday night to break a tie with Toronto FC for the MLS lead.

Kacper Przybylko scored on a penalty kick for the Union in the 28th minute. 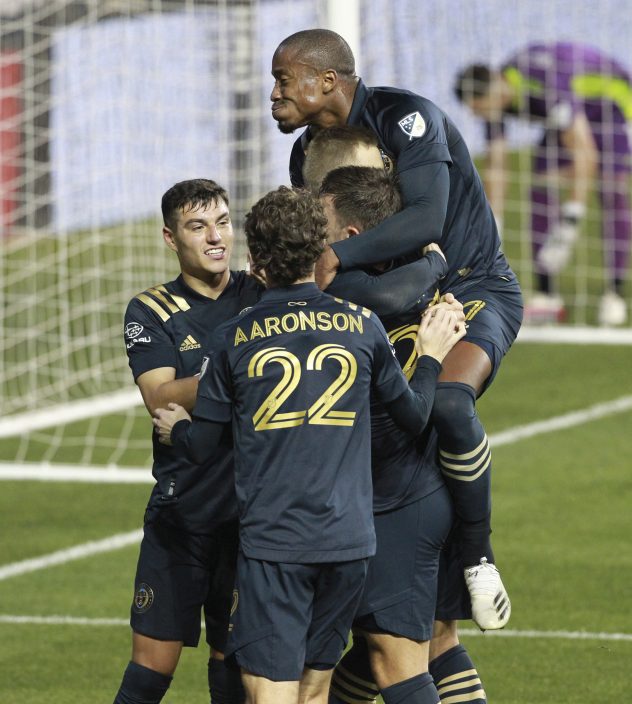 Philadelphia Union's Sergio Santos, top, leaps upon Kacper Przybylko, center of pack, as they celebrate Przybylko's goal on a penalty kick against the Chicago Fire during the first half of an MLS soccer match Wednesday, Oct. 28, 2020, in Chester, Pa. (Charles FoxThe Philadelphia Inquirer via AP)

Robert Beric tied it in the 42nd minute on a pass from Djordje Mihailovic.

Valentín Castellanos ripped a right-footer from well outside the box that was parried away by goalkeeper Quentin Westburg, but Medina put away the rebound from point-blank range in the 51st minute.

Daryl Dike had a goal and an assist to continue his strong rookie campaign, Chris Mueller scored on a free kick and Orlando City beat Atlanta United.

The 20-year-old Dike took a pass from Ruan Gregorio Teixeira, turned and fired a right-footer inside the post to open the scoring in the 29th minute. The 6-foot-2, 220-pound forward has six goals this season.

Long put away a half-volley from the top of the 6-yard box after Tim Parker’s re-directed a corner kick by Alejandro Romero Gamarra. Ryan Meara had two saves for his third shutout of the season.

New York (8-8-5) is unbeaten in its last five games, but has just two wins in its last seven. New England (7-6-8) is winless, with two losses, in its last three games.

Robin Lod scored and an own goal by Colorado helped Minnesota beat the Rapids.

On the counterattack, Ethan Finlay played an arcing cross that Colorado’s Lalas Abubakar attempted to clear but slipped under the crossbar for an own goal in the 89th minute to give Minnesota the go-ahead goal.

Minnesota (8-5-6) has won back-to-back games an is unbeaten in its last six games.

Lod ran onto a pass from Emanuel Reynoso and side-footer a first-timer from the top of the area to open the scoring in the 44th minute. Andre Shinyashiki tied it for the Rapids (5-6-4) in the 69th.

Yamil Asad sent a pass to Gressel, whose shot deflected off a defender and into the net in the 32nd minute.

Bryan Reynolds crossed to Hollingshed, who fired a shot from close range that beat goalkeeper John McCarthy. Franco Jara, who has five goals in the last 11 games for Dallas, scored on a penalty kick in the 60th.

Heavy snowfall and strong winds in ...