Such is the defensive crisis unfolding at Liverpool that a teenager who spent last season on loan at sixth-tier Kidderminster is set to be entrusted to hold together the injury-hit backline of the Premier League champions over the next few weeks.

Expect to be seeing a lot of 19-year-old Rhys Williams in the coming matches. With his 6-foot-5 (1.97-meter) frame and a man-bun that is becoming a common sight in England’s top division, he is hard to miss.

Williams is highly regarded, too, having played for England’s under-18, under-19 and under-21 teams. 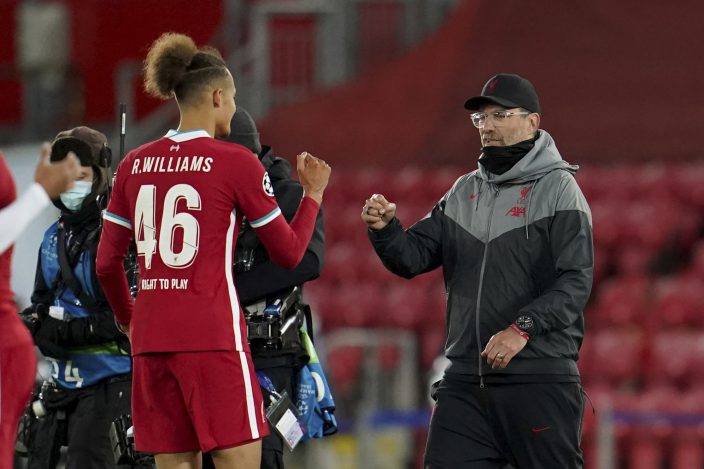 Still, his likely presence at the heart of Liverpool’s defense for Saturday’s match against West Ham at Anfield — and probably for a few more games after that — will be ringing some alarm bells among Liverpool fans, and is hardly the kind of predicament Jurgen Klopp can be relishing as he juggles domestic and European commitments in a packed schedule.

When the Liverpool manager signed off on the sale of two center backs — backup Dejan Lovren and young prospect Ki-Jana Hoever — in the offseason, he was content that he had three senior players in that position and could also fall back on midfield anchorman Fabinho in an emergency.

However, in a run of misfortune over the past two weeks, Virgil van Dijk sustained a serious knee injury that could rule him out for the season, Joel Matip had a setback on his return from a long-term absence, and then Fabinho pulled up with an injury to his right hamstring during the win over FC Midtjylland in the Champions League on Wednesday. 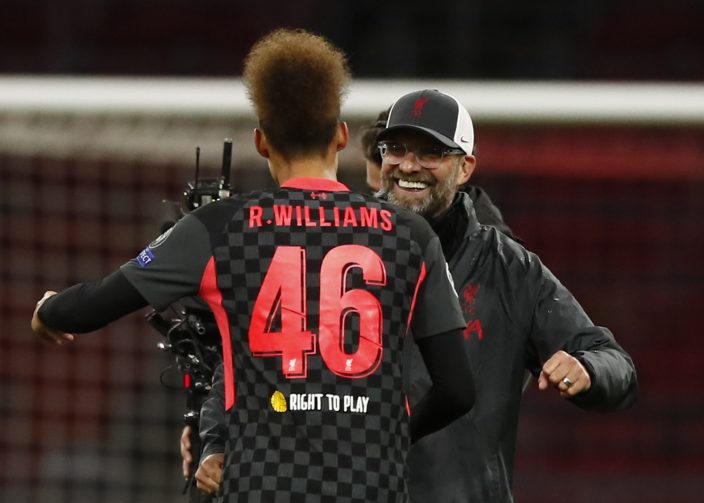 “Exactly the last thing we needed,” Klopp said of Fabinho’s injury that will certainly keep the Brazil midfielder out of the West Ham game.

Joe Gomez, a defender searching for his form of last season, stands alone as the sole fit, senior center back available to Klopp. The options alongside him are all young and inexperienced, headlined by Williams but also including 23-year-old Nat Phillips and French 17-year-old Billy Koumetio.

The number of Premier League appearances combined among that trio? Zero.

It is Williams who is set to get the nod initially, with the teenager having performed solidly after replacing Fabinho against Midtjylland. He also went on for the final minutes of the win over Ajax in the opening round of the Champions League’s group stage.

“The only problem we have now,” Klopp said of Williams after the Midtjylland game, “is that, unfortunately, we have four days to the West Ham game and you will make a story every day about him and then he has to prove he can deal with that as well.

Klopp is facing criticism for not signing a replacement for Lovren, the Croatia international who joined Zenit St. Petersburg in July.

“If anyone wants to tell us we made a mistake — I think Carragher mentioned already — there are a few reasons why they don’t do this job.”

Even when at full strength, Liverpool’s defense — the tightest in the Premier League for the last two seasons — has been unusually sloppy this campaign, notably in that astounding 7-2 loss at Aston Villa in the league. The 14 goals Liverpool has conceded so far is tied for the most in the league, along with West Bromwich and Fulham — promoted teams widely considered the favorites for relegation.

Having goalkeeper Alisson Becker back from a shoulder problem is a positive for Klopp, as is the likely absence because of injury of West Ham striker Michail Antonio, a battering ram of a forward who has been one of the Premier League’s most prolific players since the resumption of soccer following the coronavirus outbreak.

Next week, though, Liverpool is up against two of the most free-scoring teams in Europe — Atalanta in the Champions League on Tuesday and Manchester City in the Premier League the following Sunday.

It is sink-or-swim time for Williams, who surely cannot have envisaged being in this situation when playing against amateurs in the National League North last season.