Five games in and a little over a week away from its showdown with top-ranked Clemson, No. 4 Notre Dame’s passing attack is beginning to show life again heading into Saturday’s game at Georgia Tech.

Few expected the Fighting Irish to struggle there, particularly with grad student Ian Book back at the helm after throwing for 3,034 yards and 34 touchdowns in 2019.

While a veteran offensive line has cleared the way for sophomore running back Kyren Williams and the defense has been sound, Book finally looked like his old self last week in a 45-3 victory at Pittsburgh, throwing for 312 yards and three touchdowns. 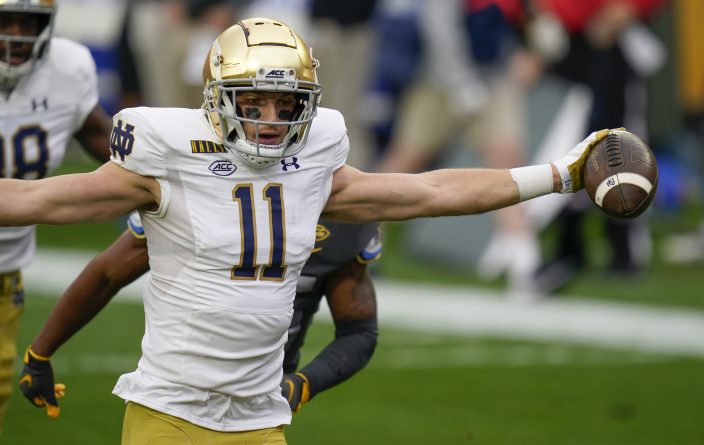 Notre Dame wide receiver Ben Skowronek (11) celebrates as he goes in the end zone past Pittsburgh defensive back A.J. Woods (25) for a touchdown after making a catch during the first half of an NCAA college football game, Saturday, Oct. 24, 2020, in Pittsburgh. (AP PhotoKeith Srakocic)

“We’re ascending at the right time,” Book said. “I feel like my game is starting to ascend and I need to keep doing the same things.”

Wide receiver Ben Skowronek, a first-year graduate transfer from Northwestern who calls Book his best friend, had touchdown receptions of 34 and 73 yards in the first half at Pitt. The 6-foot-3, 224-pound Skowronek, who totaled 110 receptions for 1,417 yards and eight touchdowns at Northwestern, could sense Book’s frustration following an 11-of-19, 106-yard, no-touchdown performance in a 12-7 victory over Louisville the week before.

“He came in locked in every single day, doing the extra things, watching film, communicating more,” said Skowronek, who flew to California to work out with Book after the COVID-19 shutdown in March. “Obviously, it paid off for him. I can’t wait to play with him moving forward.” 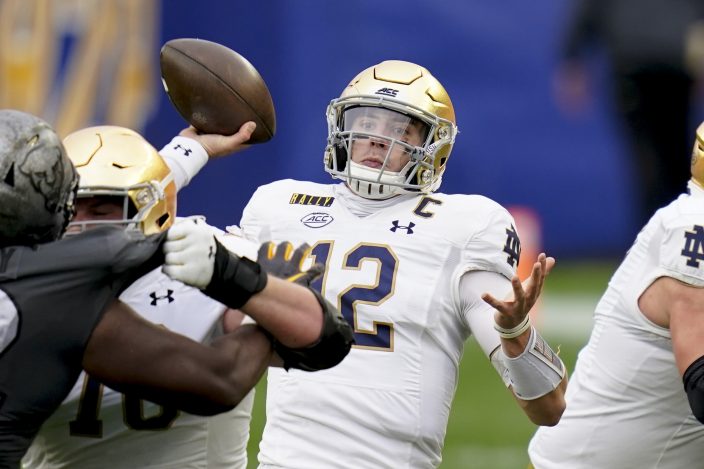 Even before the pandemic shut down spring and summer plans, coach Brian Kelly and former Irish quarterback Tom Rees, now Notre Dame’s first-year offensive coordinator, probably knew the passing attack would be a work in progress.

It has indeed been that. Gone are NFL second-round draft picks Chase Claypool and Cole Kmet, who combined for 109 catches for 1,552 yards and 19 touchdowns in 2019.

Austin, who missed his sophomore year because of disciplinary reasons, had surgery in August for a broken foot, returned briefly against Florida State and Louisville, and then rebroke the foot two days before the Pittsburgh game. Lenzy, who missed the opener against Duke with a sore hamstring, had six receptions over the next three games before re-injuring the hamstring against Pitt and is doubtful for the Yellow Jackets (2-4, 2-3).

Skowronek himself missed part of the Duke game and all of the South Florida game with a hamstring issue. He now has four receptions for 135 yards.

“We’re gaining some continuity, and I said it many times, I believe in this group,” Kelly said. “I thought when we got continuity with the offensive structure, in particular the passing game, it would look better and it would get better and Ian would feel a lot more confident in getting the ball out on time. We’re getting there.”

Book is sold on Mayer: “When the ball is in the air, Mike is going to make a play on it. He’s going to play football for a long time.”

Williams, besides his team-leading 534 rushing yards, has 10 receptions for 156 yards. Grad student Javon McKinley (nine receptions, 171 yards) and senior Avery Davis (eight receptions, 100 yards, 1 TD), a former high school quarterback who has played on both sides of the line of scrimmage for the Irish, have become dependable targets.

“Having so many guys who can make plays it’s hard for defenses to single out one guy and stop him because there’s guys all over the field,” Skowronek said. "It’s huge for our offense.”