ISLAMABAD — Pakistani authorities have ordered all businesses, including restaurants, wedding halls and markets, be closed after 10 p.m. to contain a coronavirus resurgence that began this month.

Also, authorities in the capital, Islamabad, asked police to arrest anyone violating social distancing rules by not wearing masks at public places.

The government Thursday reported some of its highest single-day totals, more than 900 new cases and 16 deaths. The numbers are almost double those reported some days last month. 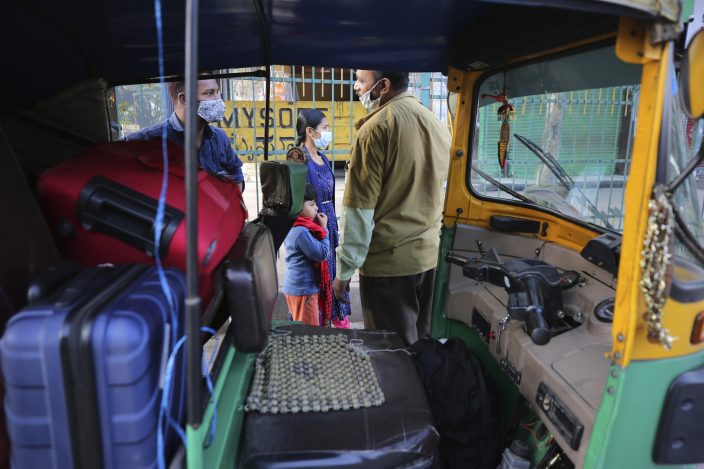 An Indian family wearing face masks as a precaution against the coronavirus bargain for a ride with an autorickshaw driver in Bengaluru, India, Thursday, Oct. 29, 2020. India's confirmed coronavirus caseload surpassed 8 million on Thursday with daily infections dipping to the lowest level this week, as concerns grew over a major Hindu festival season and winter setting in. India's trajectory is moving toward the worst-hit country, the United States, which has over 8.8 million cases. (AP PhotoAijaz Rahi)

— US data Thursday expected to show blowout economic growth in summer, but it's already fading

— Biden is focusing on COVID-19, while Trump would rather talk about just about anything else

— On the road in Mississippi, AP finds a story of love in the time of coronavirus

BEIJING — Officials in the northwestern China region of Xinjiang say they believe they have contained the country’s latest coronavirus outbreak.

Xinjiang reported 23 new confirmed cases Thursday, all involving people who had initially tested positive but displayed no symptoms. It was the second consecutive day in which newly confirmed cases emerged entirely among such people.

Officials say that development appears to show new infections have been curbed in Kashgar prefecture, where the outbreak appeared Saturday. They say all the cases seem to be linked to a garment factory that employs 252 people and has since being sealed off.

More than 4.7 million people in Kashgar have been tested for the virus.

ANCHORAGE, Alaska — Officials in Anchorage, Alaska, say the city is on a “dangerous path” as coronavirus cases rise and are urging people to avoid gatherings and follow orders to wear masks in public.

Acting Mayor Austin Quinn-Davidson says she has been meeting with business leaders, health officials and others to make decisions that protect health but also impose minimal restrictions so businesses can stay open.

The mayor says that “none of us wants another hunker-down” order.

The city’s health director says that after months of dealing with the pandemic, some people may have let down their guard. She says people should stay home except to get food, exercise outside or go to work. She says it is important to wear masks and social distance in public and to avoid contact with those at higher risk for severe illness.

WELLINGTON, New Zealand — The Marshall Islands has reported its first cases of the coronavirus after two people who flew from Hawaii to a U.S. military base tested positive.

The small Pacific nation had been among the last places in the world to have no reported cases of the virus.

The Office of the Chief Secretary says a 35-year-old woman and a 46-year-old man tested positive this week after flying directly from Honolulu to the base on Kwajalein Atoll. The office says that the two cases weren’t connected and that both people are in quarantine. The office says all businesses and government operations will continue as normal.

Home to about 78,000 people, the Marshall Islands maintains close military and civilian ties with the U.S. under a compact of free association.