Some things to watch in the Big 12 on the last Saturday of October, when No. 6 Oklahoma State and No. 16 Kansas State, the only teams still without a conference loss, will try to stay that way before meeting a week later.

Texas at No. 6 Oklahoma State. There have been a lot of close games in this series, with the last three decided by a combined 12 points after another three-point game two years before that stretch. The undefeated Cowboys (4-0, 3-0 Big 12) have allowed only 12 points a game, while the Longhorns (3-2, 2-2) are the Big 12's highest-scoring team at 45 points a game. First-year Texas offensive coordinator Mike Yurcich spent last season on Ohio State's staff after being Oklahoma State's offensive coordinator from 2013-18. Texas quarterback Sam Ehlinger has a league-high 17 touchdown passes while the Cowboys have allowed only three passing TDs. 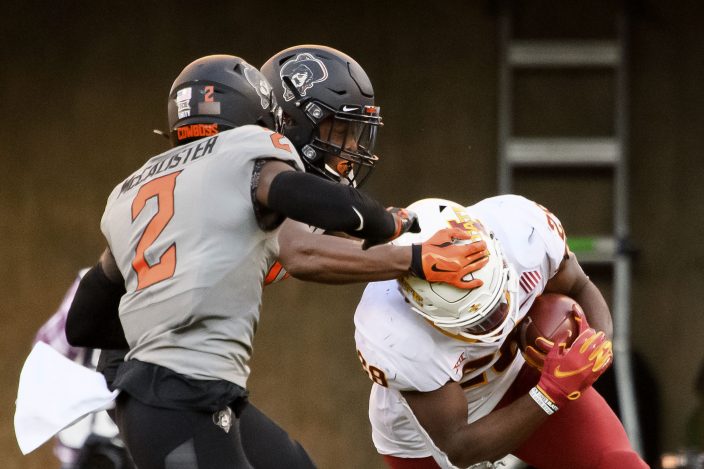 TCU at Baylor. The Big 12's only private schools, less than 100 miles apart, have been playing each other since 1899. Baylor needed three overtimes to win last year's game in Fort Worth. The Horned Frogs and Bears were the only Big 12 teams that didn't get to play their nonconference games because of COVID-19 issues. Missing a tune-up game may have affected both teams, who each have only one win. 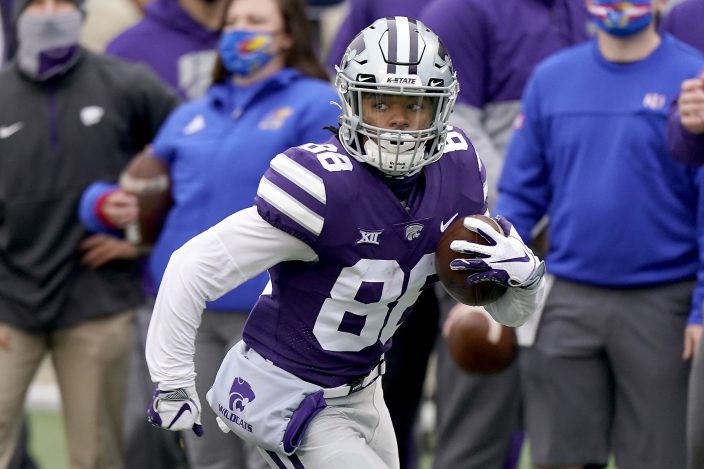 Kansas State wide receiver Phillip Brooks returns a punt for a touchdown during the first half of an NCAA football game against Kansas Saturday, Oct. 24, 2020, in Manhattan, Kan. (AP PhotoCharlie Riedel)

No. 16 Kansas State is looking to open Big 12 play with five consecutive wins for the first time since 2014. ... West Virginia is going after its fifth consecutive win over the Wildcats, including three in a row at home. ... Baylor junior linebacker Terrel Bernard, the Big 12's leading tackler at 13.3 per game, is coming off the second 19-tackle game of his career, at Texas. ... Kansas State sophomore Phillip Brooks is the only player in school history to return two punts for a touchdown in the same game, for 55 and 52 yards in the Wildcats' 12th win in a row against instate rival Kansas. ... When Oklahoma State beat Iowa State last weekend, it was coach Mike Gundy's 30th win over an AP Top 25 team. Alabama's Nick Saban and Clemson's Dabo Swinney are the only active coaches with more at their current schools.

Iowa State sophomore Breece Hall is the nation’s top rusher at 143.2 yards per game, and is coming off a career-high 185 yards at Oklahoma State’s strong defense. The Cyclones play at winless Kansas, which allows 208 yards rushing per game.