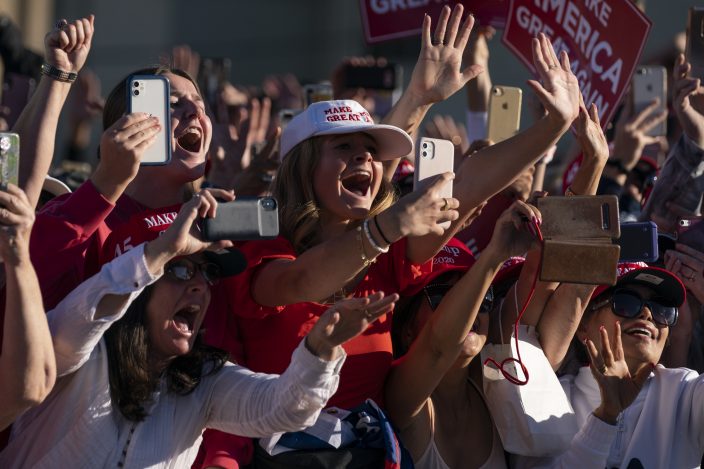 Supporters of President Donald Trump cheer as he walks off stage after speaking during a campaign rally at Phoenix Goodyear Airport, Wednesday, Oct. 28, 2020, in Goodyear, Ariz. (AP PhotoEvan Vucci)

LOVE IN THE TIME OF CORONAVIRUS — In an America surging with cases of coronavirus, the AP Road Trip team meets a Mississippi man longing for his wife nearly four months after she was hospitalized with COVID-19. This is a love story. But it’s also a story of coronavirus and who it strikes. And it’s a look at the people who take COVID-19 seriously, the people who don’t, and how that divide can break uncomfortably along racial lines. By Tim Sullivan. SENT: 2,190 words, photos. An abridged version of 1,030 words is also available. 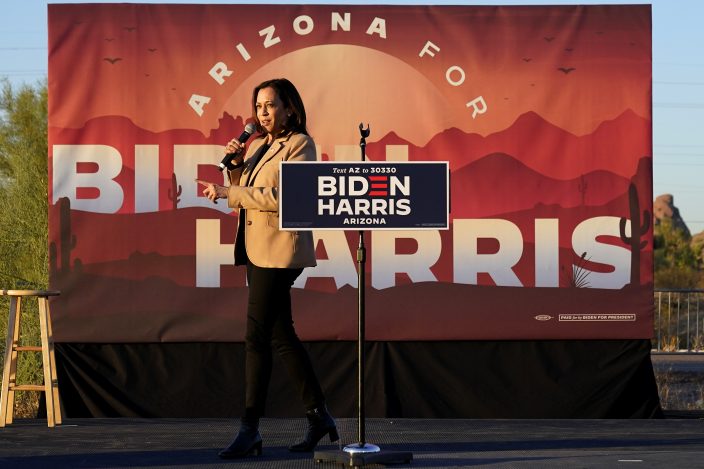 ELECTION 2020 — President Donald Trump and Democratic rival Joe Biden chase votes in Florida, a state all-but-essential to the Republican’s pathway to another term as both nominees turn their focus to encouraging voters to turn out on Election Day. By Zeke Miller, Aamer Madhani and Tamara Lush. SENT: 830 words, photos. 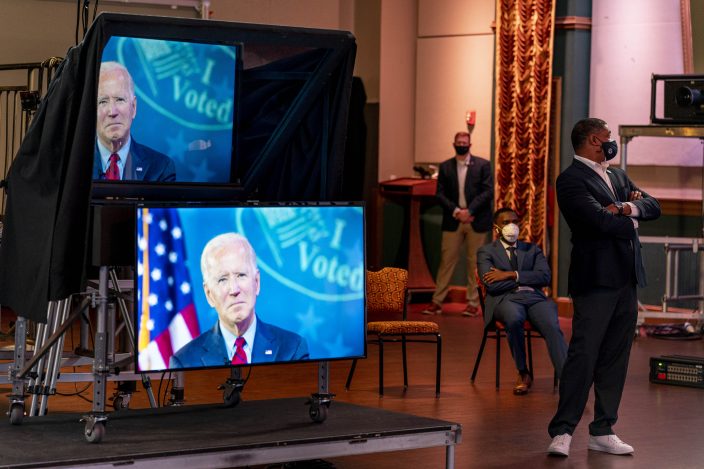 ELECTION 2020-GET OUT THE VOTE — In the best of times, it’s a massive logistical challenge to get millions out to vote. In 2020, the difficulty has been dramatically compounded: by fear of the coronavirus, by complications and confusion over mail-in ballots, by palpable anxiety over the bitter divisions in the country. By Jocelyn Noveck and Claire Galofaro. SENT: 1,530 words, photos.

TROPICAL WEATHER — A fast-moving Zeta weakens to a tropical storm as it barrels northeast after ripping through Louisiana and Mississippi. Weather-weary residents were advised to stay indoors overnight while officials assessed the havoc the once Category 2 storm had wrought. By Rebecca Santana and Kevin McGill. SENT: 980 words, photos, video. With TROPICAL WEATHER-THE LATEST.

PHILADELPHIA-POLICE-SHOOTING — Philadelphia police pledge to release 911 tapes and police body camera footage “in the near future” in the shooting death of a Black man with a history of mental health problems, a death that prompted protests, widespread vandalism and an overnight curfew days before Election Day. By Maryclaire Dale. SENT: 1,030 words, photos, videos. Also see ELECTION 2020-POLICE SHOOTING below.

ELECTION 2020-IRAN-ANALYSIS — Top officials in Iran say the upcoming U.S. election doesn’t matter, but nearly everyone else there seems to be holding their breath. The race for the White House could mean another four years of Trump’s “maximum pressure” campaign. Or it could bring Biden, who has raised the possibility of the U.S. returning to Iran’s 2015 nuclear deal with world powers. By Jon Gambrell. SENT: 1,110 words, photos. 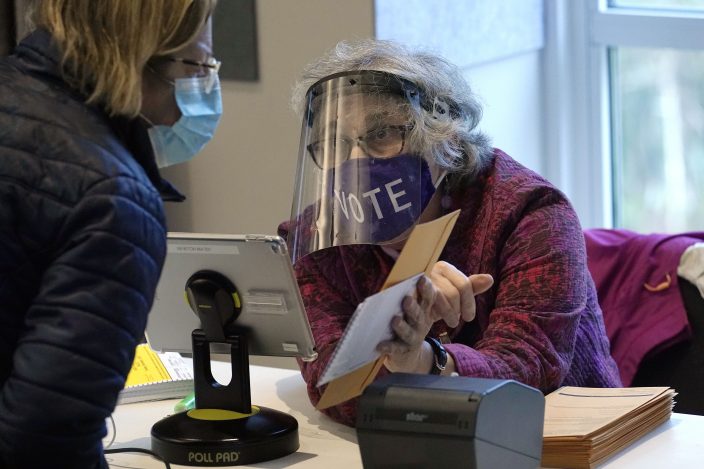 Poll worker Alice Machinist, of Newton, Mass., right, wears a mask and shield out of concern for the coronavirus while assisting a voter, left, with a ballot during early in-person general election voting, Wednesday, Oct. 28, 2020, at the Newton Free Library, in Newton, Mass. (AP PhotoSteven Senne) 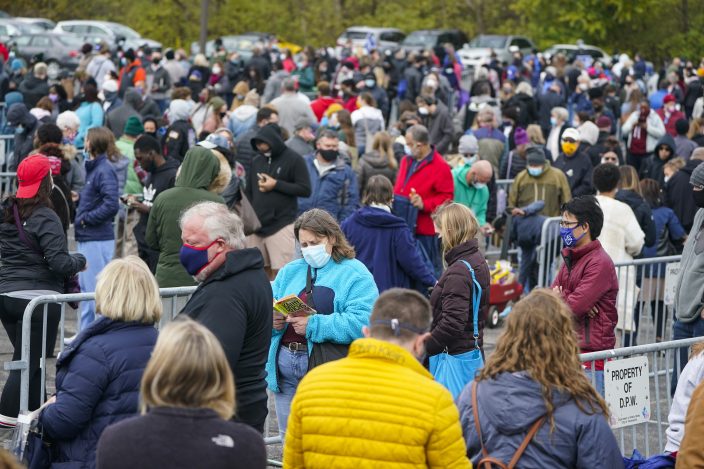 Voters wait in long lines to cast their ballots during early voting at St. Luke's United Methodist Church in Indianapolis, Wednesday, Oct. 28, 2020. The wait to vote was over 4 hours. (AP PhotoMichael Conroy) 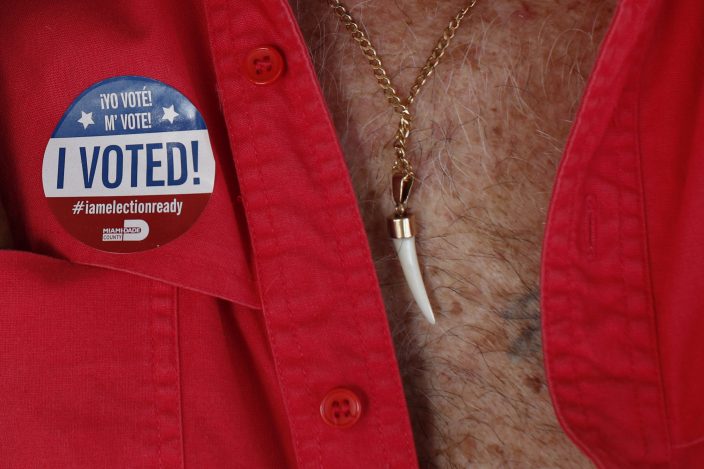 Ramon Silva, 78, wears an "I voted" sticker, as he passes the time in Little Havana after casting his ballot in early voting, in Miami, Wednesday, Oct. 28, 2020. Silva, who said he was a political prisoner in Cuba for 15 years before coming to the U.S. 41 years ago, voted for President Donald Trump because he fears any shift toward socialism in his adopted homeland. (AP PhotoRebecca Blackwell) 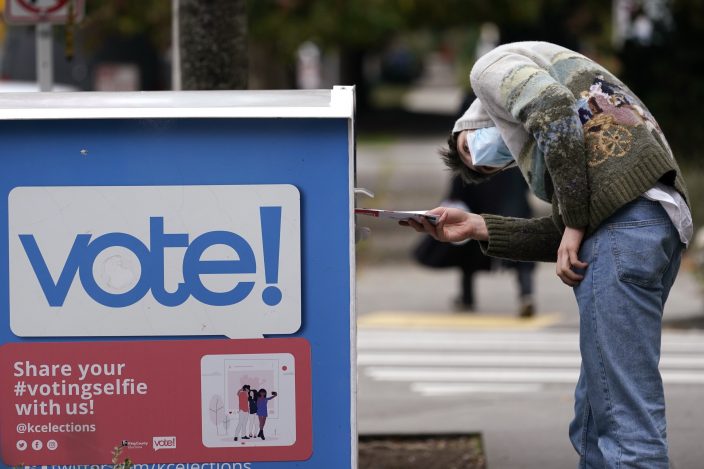 A voter turns sideways as he eyes the opening of a ballot drop box before placing his ballot inside it Wednesday, Oct. 28, 2020, in Seattle. Washington state is one of five states, along with Colorado, Hawaii, Oregon, and Utah, that conduct elections entirely by mail-in voting. (AP PhotoElaine Thompson)

AUSTRALIA-TRAVEL-BAN — Australia has sought to prevent new coronavirus cases from reaching its shores by banning most of its residents from leaving in the first place. SENT: 1,240 words, photos.

VIRUS OUTBREAK-VIRAL QUESTIONS-CORONAVIRUS-HEART — Even though COVID-19 is known as a respiratory virus, doctors believe the coronavirus can directly infect the heart muscle and cause other problems leading to heart damage. SENT: 350 words, graphic.

VIRUS OUTBREAK-TAIWAN — Taiwan hits 200 days without any domestically transmitted cases of COVID-19, highlighting the island’s continued success at keeping the virus under control even as cases surge in other parts of the world. SENT: 360 words, photo. 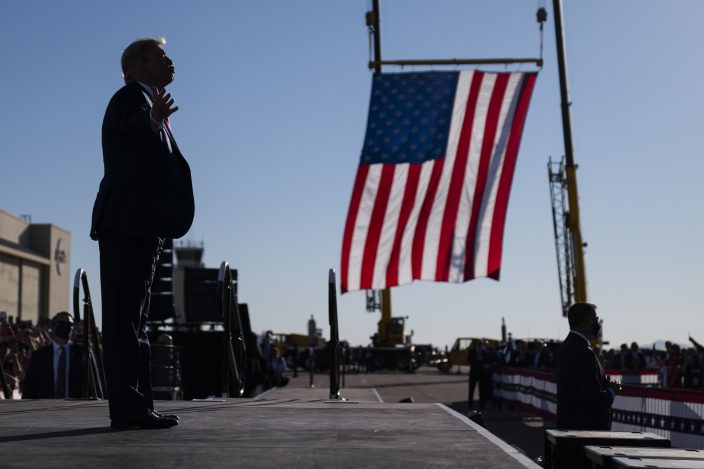 VIRUS OUTBREAK-ASIA — The Marshall Islands has reported its first cases of the coronavirus after two people who flew from Hawaii to a U.S. military base tested positive. SENT: 420 words, photos. 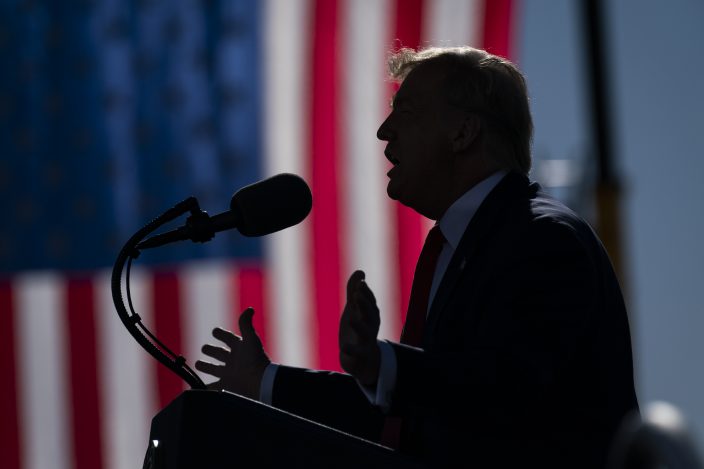 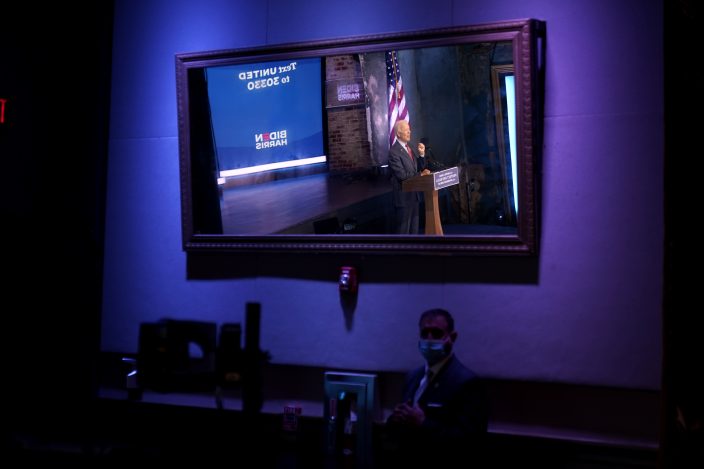 ELECTION 2020-POLICE SHOOTING — The police shooting of another Black man on America’s streets — with subsequent unrest — brings the fraught issues of policing and racism in the country back to the forefront of the 2020 presidential election in its closing days. SENT: 850 words, photos.

ELECTION 2020-LAWSUITS — Tens of millions of Americans have already cast their ballots, yet waves of partisan lawsuits unlike anything seen in past national elections are flooding court systems, where Republicans and Democrats have been fighting over everything from lines to whether guns are allowed at polling spots. SENT: 1,020 words, photo. 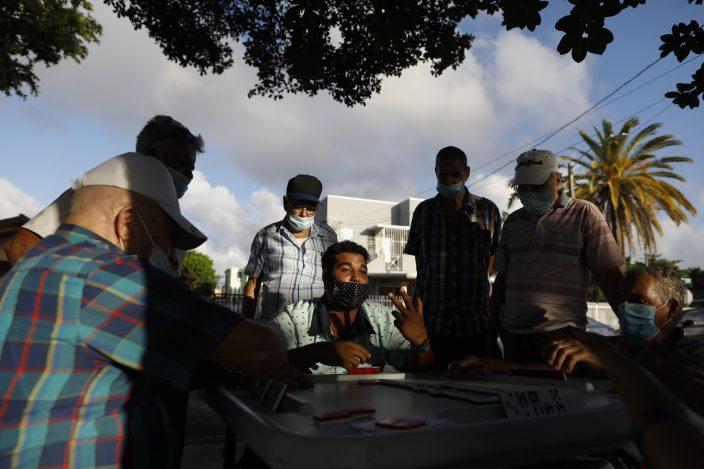 Maikler Marquez, 29, center, originally from Venezuela, plays competitive dominos with other neighborhood residents in the Little Havana section of Miami, Wednesday, Oct. 28, 2020. With tourism and nightlife suffering amid the ongoing coronavirus pandemic, some businesses in the iconic Miami neighborhood remain closed and their employees out of work. (AP PhotoRebecca Blackwell)

ELECTION 2020-VOTING-OUTSTANDING BALLOTS — Millions of mail ballots have yet to be returned in key battleground states just days before the presidential election, according to data collected by The Associated Press. SENT: 1,000 words, photos. With AP data distribution, AP interactive.

ELECTION-2020-TRUMP-LATINOS — Trump is putting up a fight for Latino voters in key swing states with Biden. SENT: 980 words. 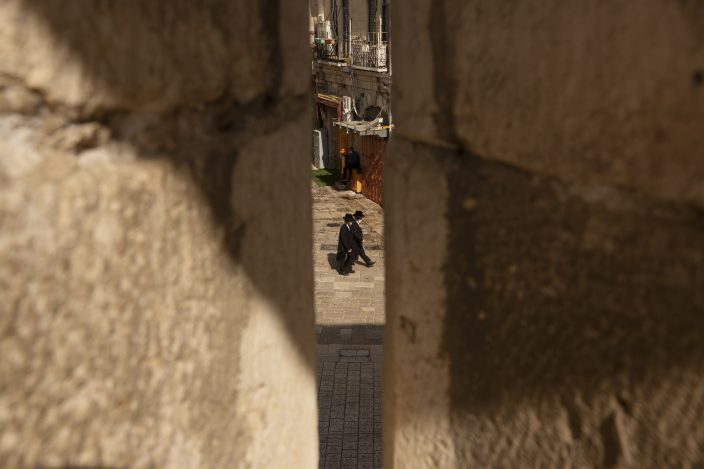 Ultra-Orthodox Jewish men walk on the Old City of Jerusalem, as seen through a gap in the ancient fortress at the Tower of David Museum, Wednesday, Oct. 28, 2020. Jerusalem's ancient citadel is devoid of tourists due to the pandemic and undergoing a massive restoration and conservation project. The Tower of David, the Old City's iconic fortress, contains remnants of successive fortifications built one atop the other stretching back over 2,500 years. (AP PhotoMaya Alleruzzo)

CALIFORNIA WILDFIRES — Thousands of Californians were allowed to return to their homes as calmer winds helped firefighters beat back two wind-driven wildfires that had spurred widespread evacuations. SENT: 650 words, photos.

ASIA-TYPHOON — Typhoon Molave set off landslides that killed at least 15 people and left 38 missing in central Vietnam, where ferocious wind and rain blew away roofs and knocked out power in a region of 1.7 million residents. SENT: 490 words, photos.

SKOREA-CORRUPTION — South Korea’s top court upholds a 17-year sentence on former President Lee Myung-bak for a range of corruption crimes in a final ruling that will send him back to prison soon. SENT: 380 words, photo.

VIRUS-OUTBREAK-ECONOMY — Americans may feel whiplashed by a report on the economy’s growth this summer, when an explosive rebound followed an epic collapse. By Christopher Rugaber. SENT: 1,000 words, photo. UPCOMING: Report at 8:30 a.m.