Officials in Britain's opposition Labour Party failed to stamp out anti-Semitism and committed “unlawful acts of harassment and discrimination” against members of the Jewish community, the U.K. equalities watchdog said Thursday.

The Equality and Human Rights Commission found “significant failings” and a “lack of leadership” in how the left-of-center party handled allegations of anti-Semitism among its members.

Labour has faced allegations that anti-Semitism was allowed to fester under the 2015-2019 leadership of Jeremy Corbyn, a long-time supporter of Palestinians and a critic of Israel. 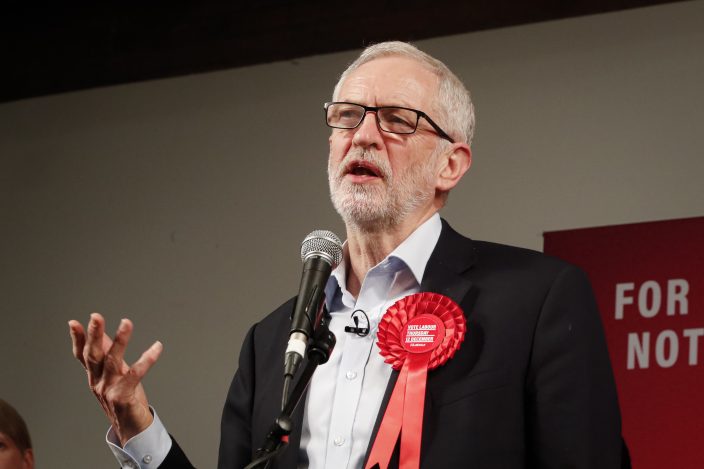 FILE - In this Wednesday, Dec. 11, 2019 file photo, Labour Leader Jeremy Corbyn addresses an eve of poll rally in London. Britain’s equalities watchdog said Thursday, Oct. 29, 2020 that officials in the country’s main opposition Labour Party failed to stamp out anti-Semitism and committed “unlawful acts of harassment and discrimination” against the Jewish community. Labour has faced allegations that anti-Semitism was allowed to fester under the 2015-2019 leadership of Jeremy Corbyn, a long-time supporter of Palestinians and a critic of Israel. (AP PhotoThanassis Stavrakis, file)

Current Labour leader Keir Starmer, who has vowed to root out anti-Semitism, said the report marked a “day of shame” for the party. He said there would be “no more denials or excuses.”

In a 130-page report, the commission said in two cases party officers committed “unlawful harassment” against Jewish people and their allies. It said there were many more accounts of harassment by ordinary party members, but that Labour could not be held legally accountable for them since the perpetrators did not hold any official roles.

The equality commission also said there was “evidence of political interference in the handling of anti-Semitism complaints,” and that the interference was unlawful.

“Some complaints were unjustifiably not investigated at all,” the report said.

It said there was “a culture within the party which, at best, did not do enough to prevent antisemitism and, at worst, could be seen to accept it.”

The commission does not have the power to bring criminal charges, but made recommendations for change, which the party is legally bound to act on.

Corbyn stepped down as leader in December after Labour had its worst general election showing since 1935. Starmer, elected in April, has vowed to stamp out prejudice and restore relations between the party and the Jewish community.

“If you’re anti-Semitic, you should be nowhere near this party,” Starmer said. “And we’ll make sure you’re not.”

After the report was published, Corbyn said he regretted that “it took longer to deliver … change than it should.” But he added that “the scale of the problem was also dramatically overstated for political reasons by our opponents inside and outside the party.”

Declaring "America is back," Presi ...