Pelosi lobbed her latest public relations volley with a letter to Mnuchin that blames Republicans for the failed talks, which ground on for three months only to crater in the final days before the election. Where the talks go after the election is wholly uncertain.

Pelosi says remaining obstacles to an agreement include more than half a dozen big-ticket items, including a testing plan, aid to state and local governments, funding for schools, jobless benefits and a GOP-sought shield against coronavirus-related lawsuits. 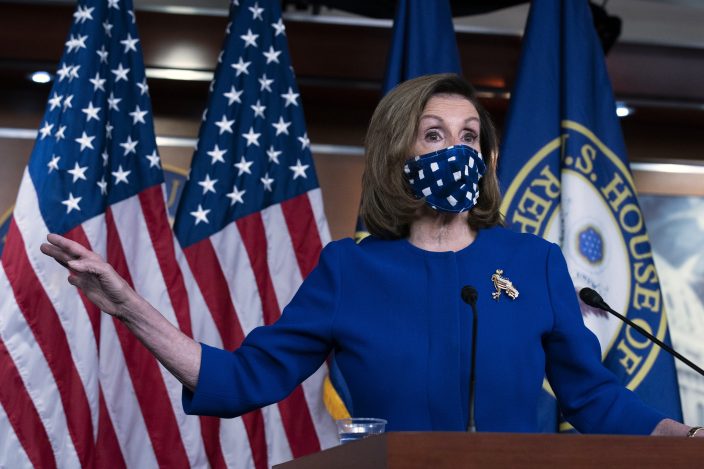 Republicans, who will control the White House and the Senate until January regardless of the outcome of Tuesday's election, have pressed for a more targeted aid package that ignores key Pelosi demands, saying items like refundable tax credits for the working poor and families with children aren't directly related to fighting COVID-19. Republicans say Pelosi has slow-walked the negotiations to deny President Donald Trump a victory in the run-up to Election Day.

Pelosi's letter to Mnuchin comes as markets are reeling from a coronavirus surge across the country and Washington’s failure to agree on another virus relief package.

“As the coronavirus surges and the stock market plummets, we are still awaiting the Trump Administration’s promised responses on multiple items of critical importance,” Pelosi wrote. “Your responses are critical for our negotiations to continue."

The California Democrat has played hardball in the talks and has for months demanded a $2 trillion-plus COVID-19 rescue deal that's larger than the landmark $1.8 trillion CARES Act that swept through Congress in March. Legislation has twice passed the House, but the GOP-held Senate has been gridlocked.

Recent weeks of secretive talks have been accompanied by lots of optimistic talk from Pelosi and at times from her administration counterparts — but no results. Meanwhile, many Senate Republicans have broken with Trump, who was eager for a deal that would have let him issue another round of $1,200 direct payments in his name. Senate Majority Leader Mitch McConnell advised Trump against a deal before the election, warning it would divide Republicans.

The failure of the talks, along with a third, frightening wave of coronavirus cases sweeping the country, has sent markets plummeting and is sure to bring heat on lawmakers to resolve their differences after the election. But such lame-duck sessions — especially if there is a change in Washington's balance of power — often fail to deliver.