Cincinnati played Memphis twice in a span of eight days last season, in the final regular-season game and again in the American Athletic Conference championship. Both games were close, but both were losses for the Bearcats.

On Saturday in Nippert Stadium, the teams meet again with No. 7 Cincinnati (4-0, 2-0 AAC) looking to continue its push toward a potential College Football Playoff berth and Memphis (3-1, 2-1) hoping to climb into the AAC title race. 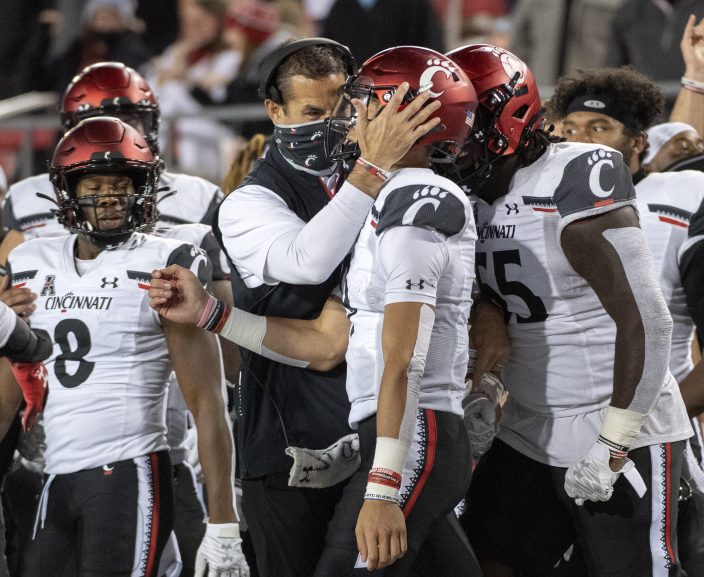 Cincinnati head coach Luke Fickell congratulates quarterback Desmond Ridder after Ridder rushed for his third touchdown of the game during the second half of an NCAA college football game against SMU Saturday, Oct. 24, 2020, in Dallas. Cincinnati won 42-13 and Ridder finished with 179 yards rushing. (AP PhotoJeffrey McWhorter)

It’s a different Tigers team this time around.

Running backs Patrick Taylor and Antonio Gibson are both in the NFL. Sophomore running back Kenny Gainwell opted out before the season due to COVID-19-related deaths in his family. Wide receiver Damonte Coxie opted out on Oct. 19.

Senior QB Brady White is one of the few who returned on offense. He passed for a combined 486 yards and three TDs in the two games against Cincinnati last year. 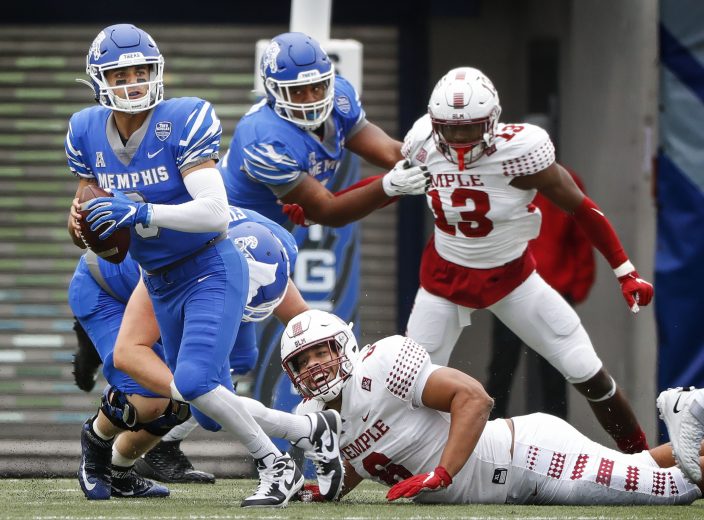 “I was watching both of our games versus them last year, it’s different bodies that we have out there offensively,” said Tigers coach Ryan Silverfield. “Some of our offensive line faced them and so did our quarterback. But it’s a whole new set of skill players.”

The Bearcats, who are coming off a 42-13 blowout win at SMU last week, are loaded with talent, particularly on defense. Quarterback Desmond Ridder earned American Athletic Conference player of the week honors last week. 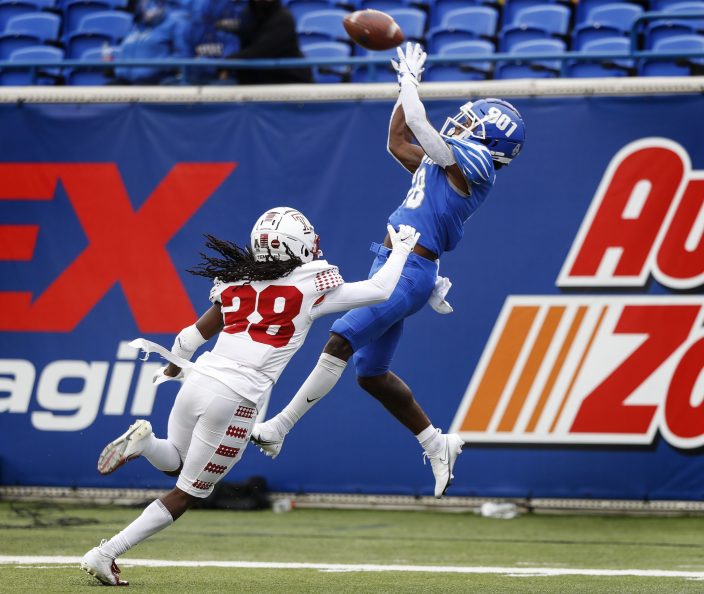 Cincinnati is hoping for a different result from last season and to end a five-game losing skid to the Tigers. Fickell said any mention of a possible College Football Playoff berth is premature.

“When you get to the end of the season, I’ll be able to talk about it,” Fickell said. “Our guys need to understand we have a long way to go. We need to find a way to finish. Two times (last season) we didn’t, and both ended up being against Memphis.”

After a slow start to the season, Ridder enjoyed a career night in the win at SMU, with three rushing touchdowns and one passing. Ridder’s 179 rushing yards were a school record for a quarterback. His 91-yard TD run put the game away in the fourth quarter. “The great thing about Dez is he has a really, really good confidence level,” Fickell said. “It does take some things off his shoulders. It’s nice to get a little mojo going, especially on the road.”

The Bearcats will play their final three home games without fans after the university decided to extend its COVID-19 protocols. “It’s a disappointment that a lot of people in our league continue to have fans in the stands and I guess we’re not,” Fickell said. “For our kids, it’s a tough situation to go on the road and see what other people have.” There were 7,898 fans for the Bearcats game at SMU last week. The Cincinnati Bengals allowed 12,000 fans in Paul Brown Stadium for Sunday’s game against the Browns.

Silverfield said Cincinnati isn’t allowing the Tigers onto the field at Nippert Stadium on Friday for a walk-through because the turf is being painted after an MLS match on Wednesday night. “Before we take off, I’m literally going to have to show our team pictures of the stadium because I want them to visualize,” Silverfield said. “Instead of being able to stretch and do some ball drills at their stadium we’re probably going to have to do it in the parking lot of the hotel.”

At Georgia Senate rally, Trump can help his party or hi ...