According to Bell's letter, the flags are attached to the front of the site and therefore could be interpreted as an official endorsement by the board of elections in favor of a particular movement. Bell said the signs must be removed for the rest of the early voting period, which ends on Saturday. 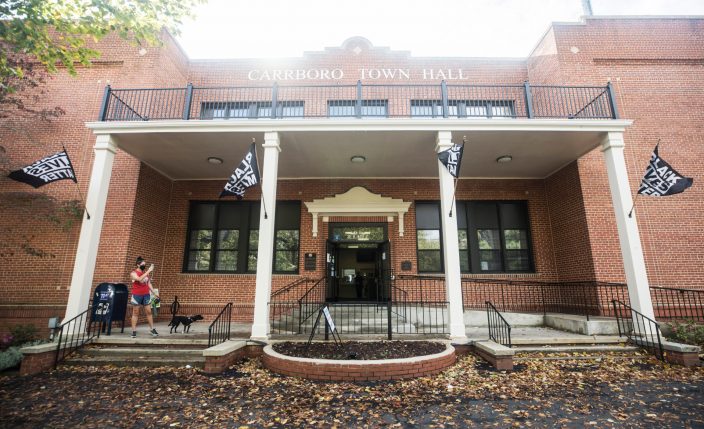 Black Lives Matter flags are displayed outside the Town Hall on Thursday, Oct. 29, 2020 in Carrboro, N.C. The North Carolina State Board of Elections ordered the town of Carrboro to remove Black Lives Matter signs from its voting site after receiving complaints, but the town says the signs will stay put. (Julia WallThe News & Observer via AP)

“While these flags may be a supported symbol of the Town of Carrboro, the one-stop early voting site is open to any Orange County voter and therefore the site must provide the opportunity for all voters to exercise their right to vote without intimidation or hindrance,” Bell wrote.

Officials in Carrboro issued a two-sentence statement on Thursday acknowledging the letter and rebuffing Bell's order.

“After consulting with the town attorney, the Mayor and Town Council have chosen to leave the flags in place,” the statement said.

Carrboro, a small town just west of the college town of Chapel Hill, is known for its progressive stances. On the town's website, Lavelle writes that Carrboro is a “forward thinking community with a relaxing small town atmosphere.”

Last week, in Memphis, Tennessee, an elections official said a poll worker was fired after turning away early voters who were wearing “Black Lives Matter” and “I Can’t Breathe” shirts, an elections official said Monday. The action was taken after officials received a call from a witness at the voting site, said Shelby County Election Commission spokeswoman Suzanne Thompson.

While Tennessee law prohibits voters from wearing items bearing the name of a candidate or a political party in a polling place, it doesn't prohibit statements such as “Black Lives Matter,” Thompson said.