Federal immigration officials acknowledged Thursday that they erroneously told some new U.S. citizens in Massachusetts that they could not vote in next week's election because they had missed the state's voter registration deadline.

U.S. Citizenship and Immigration Services, which oversees the citizenship process, said officials at some recent naturalization ceremonies mistakenly told new citizens they were ineligible to vote because the Oct. 24 registration deadline had passed.

State law, however, allows new citizens to register until 4 p.m. the day before an election if they became citizens after the deadline. 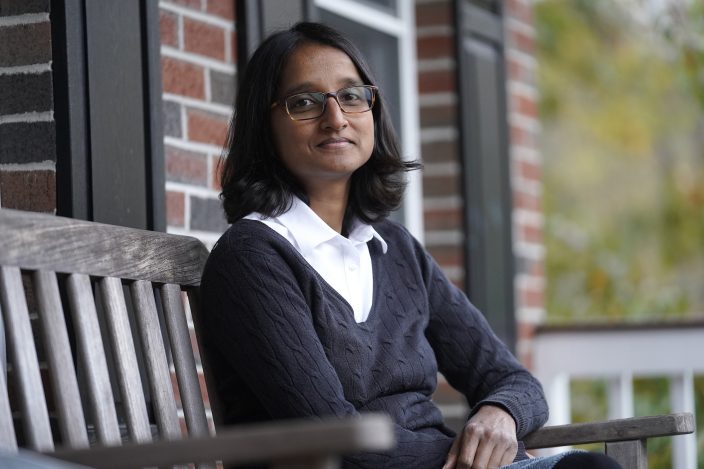 Erika Constantine, of North Attleboro, Mass., poses for a portrait on the front porch of her home, Thursday, Oct. 29, 2020, in North Attleboro. Canadian-born Constantine spoke up during her naturalization ceremony after Federal immigration officials incorrectly told new U.S. citizens in Massachusetts that they couldn't vote in this year's general election because the state's registration deadline had passed before they took their citizenship oaths. (AP PhotoSteven Senne)

Agency spokesman Daniel Hetlage said in a written statement that the error was based on information from a state website. The agency has contacted all new citizens who may have received incorrect information, he said.

“The state has since updated its webpage and we at USCIS are not aware of this happening anywhere else,” Hetlage said.

In a statement to GBH News, which first reported the story, the immigration agency said it was contacting 409 new citizens who had received incorrect information at 36 ceremonies Monday and Tuesday.

Debra O’Malley, a spokesperson for the Massachusetts secretary of state, said the elections website did not previously include details on registration for new citizens. The issue has rarely arisen, she said, but department officials have consistently told USCIS about the extension for newly naturalized citizens.

“We have certainly made them aware of this in the past,” O’Malley said. “Perhaps they have new people, perhaps it wasn’t communicated. I can’t really say. I wish they had contacted us directly beforehand.”

The website has been updated saying new citizens can register at their local elections offices until 4 p.m. Nov. 2 if they have documentation that they were naturalized after the Oct. 24 deadline.

The snafu has drawn backlash from immigration activists and some new citizens who wonder how far the misinformation spread.

Erika Constantine was among roughly 20 people becoming U.S. citizens at a ceremony in Boston on Tuesday when an immigration official said they could not vote next week because they missed the registration deadline. It shocked Constantine, whose local elections office had provided the correct information saying she had until Nov. 2.

When she raised her hand and challenged the official, he backed down, she said.

“He said, ‘Well, that’s great, everybody register to vote,’” said Constantine, a physician at Brown University who was born in Canada but moved to the U.S. in 2003.

Still, she wondered how many others had believed that they could not vote. "What about all the other officers in Massachusetts? What are they telling people?” she said.

It was especially troubling to Constantine, who pursued citizenship largely so she could vote in next week's election.

“I have three children who are American citizens, and I had no voice,” she said. “Everybody's voice is important, and what concerns me the most is that all these new immigrants are being misinformed.”

Anthony Drago, a Boston immigration lawyer, said one of his clients was among those given erroneous information. Federal officials called him and his client Wednesday to correct the error, he said, and his client has since registered to vote. His client is “thrilled” to cast a ballot in next week's election, he said.

“They knew there was an error and they fixed it rapidly,” Drago said.