The other side of the ball is pretty potent, too.

The Chiefs are ranked 18th in overall defense, but are fourth in the NFL against the pass with a secondary, led by Tyrann Mathieu. Kansas City has intercepted at least one pass in five straight games, including a pick-6 by Daniel Sorensen last week against Denver. And, then, there's the Chiefs' sack-happy bunch up front. 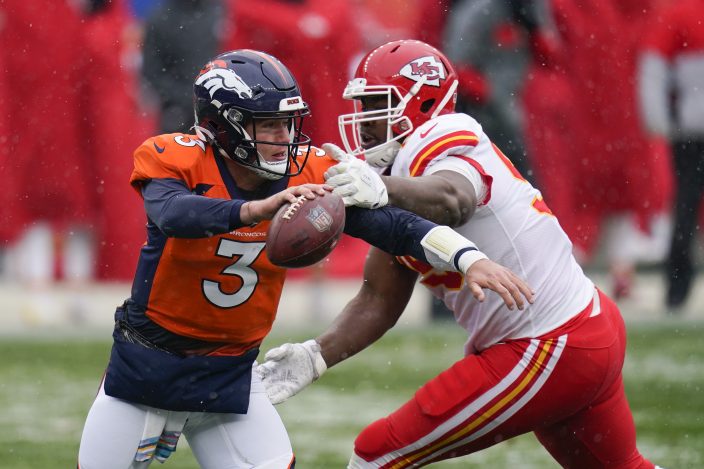 “You've got the Honey Badger back there doing what he does,” Darnold said of Mathieu. “And, obviously, they've got — we call them ‘game wreckers’ — with Chris Jones and Frank Clark on the D-line. They've got other guys as well, but those guys can do some special things on the football field.”

Not exactly a comforting thought for an 0-7 Jets team that has struggled to do anything on offense.

“Obviously, the offense gets a lot of hype,” Darnold said of the Chiefs, “but we know we're going against a really, really good defense, as well.”

Jones signed a four-year contract worth $80 million, including $60 million guaranteed, in July and is again one of the NFL's most dominant defensive linemen. He's among the league leaders with 4 1/2 sacks, and a weekly matchup nightmare for offenses.

“It’s one of those tough ones of, ‘How do you stop this guy?’” coach Adam Gase said. “He’s been phenomenal, really since he’s got in the league. Just big, fast, his instincts are unbelievable. He just seems to know the right time to do with all his moves.”

Gase, like most of the Chiefs' opponents, sees an even tougher challenge when Jones and Clark, who has three sacks this year, line up on the same side of the D-line.

“That’s a whole different animal right there in itself,” Gase said, “because those two guys, they’re impressive when you watch them, especially when they’re working together.”

That means Darnold, coming off one of his roughest starts in his two-plus NFL seasons, will need to bounce back this week in a big way. He was 12 of 23 for 120 yards — the second-lowest total of his career — with two interceptions in New York's 18-10 loss to Buffalo. Darnold was also sacked six times, getting little time, if any, to make plays after missing two games with a sprained shoulder.

And that came after Gase handed off the play-calling duties to offensive coordinator Dowell Loggains, who oversaw an offense that scored 10 points in its first three possessions. But that was it, and the Jets gained an embarrassingly low 4 total yards in the second half.

It'll be Loggains' job again this week at Kansas City, with New York hoping for much better results.

“The good thing is, it was nothing that we don't control ourselves,” Loggains said. “It was completely about us. It's about execution and coaching and doing the small things right, like we did in the first half.”

That has been the problem, however, for the Jets all season.

They rank last in the NFL in almost every major offensive category, including scoring, total yards, yards passing and third-down efficiency. That has been a key reason, whether it has been Gase or Loggains calling the plays, for New York's first 0-7 start since 1996.

Loggains used a lot more pre-snap motion while calling the offense against Buffalo, using it in nearly half of the Jets' plays from scrimmage. While it is mainly opponent specific and the Jets might not use it as much against the Chiefs, they certainly saw some benefit in changing up their approach.

“I think having some of that stuff in helps with diagnosing defenses and obviously helps in the run game, in the pass game, as well just with certain things,” Darnold said. “So yeah, definitely, shifts, motions — when any team does it, when you watch other teams do it on film, you see how it helps them. So, we said kind of why not, and I felt like it was really good for us.”

Darnold insists he isn't putting any added pressure on himself to put last week behind him and have a big performance. Even with no one outside the facility giving the Jets any chance against the heavily favored Chiefs.

“This is just another really good opportunity,” Darnold said, “for us to go out there and prove ourselves against really good football team.”