Back when he was a TV commentator and dubbed a quarterbacks guru, Raiders coach Jon Gruden dissected Baker Mayfield's game and decided he loved it.

“The guy is an excellent quarterback,” Gruden said. 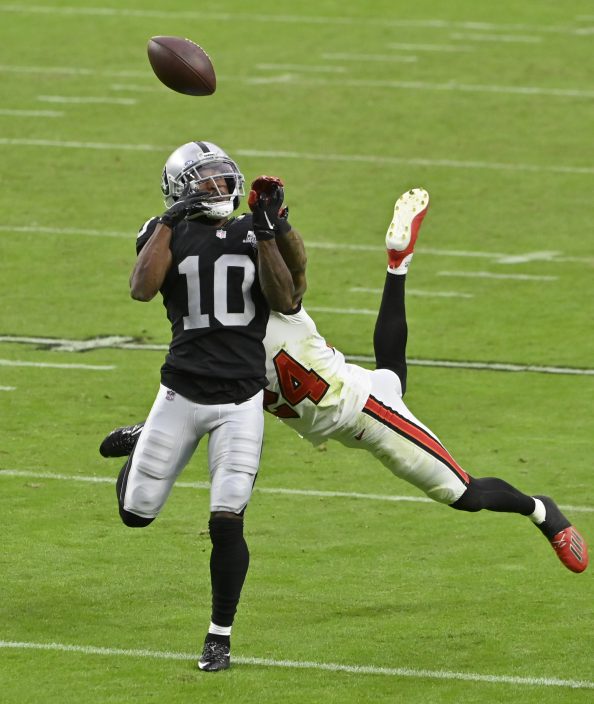 That's still up for debate, but Mayfield, who has been up and down during his two-plus NFL seasons, is coming off one of the best games of his career as the maybe-better-than-advertised Cleveland Browns (5-2) host Gruden's Las Vegas squad on Sunday.

Mayfield shook off an 0 for 5 start and the loss of wide receiver Odell Beckham to a season-ending knee injury last week by completing 21 straight passes and throwing five touchdown passes — the last with 11 seconds left — as the Browns outslugged the Cincinnati Bengals 37-34.

The terrific performance temporarily quieted Mayfield's critics, some of whom were quick to point out that it “was only the Bengals” and still want to see Cleveland's quarterback deliver a similar outing — or something close — against a high-quality opponent. 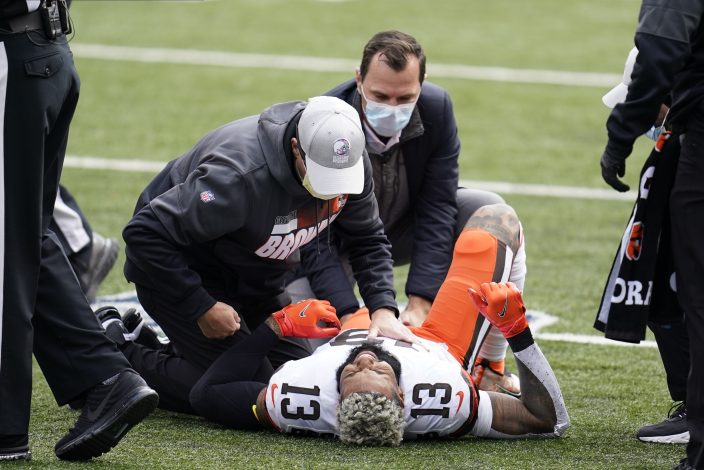 Cleveland Browns' Odell Beckham Jr. (13) is examined during the first half of an NFL football game against the Cincinnati Bengals, Sunday, Oct. 25, 2020, in Cincinnati. Browns star wide receiver Odell Beckham Jr. will miss the rest of the season after tearing a knee ligament during Sunday's 37-34 win at Cincinnati. (AP PhotoMichael Conroy)

Gruden doesn't need any convincing. He's been sold on Mayfield for a while. 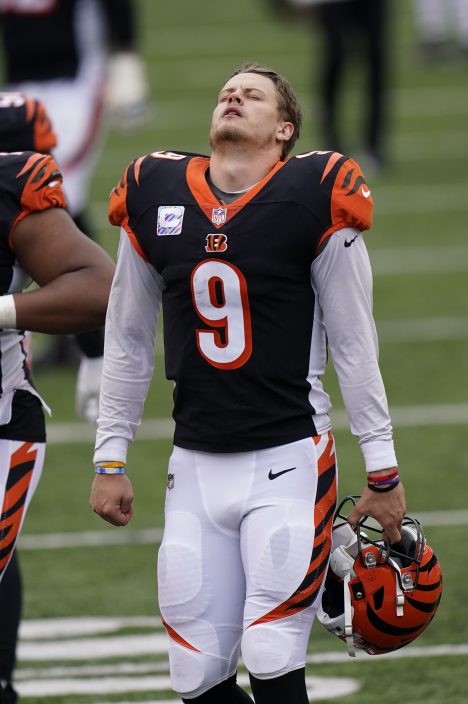 It will be interesting to see how Mayfield and Cleveland's coaches adjust to not having Beckham, whose speed forced defenses to often commit a safety to his side of the field.

“This is a savvy group,” Mayfield said. "We are going to do whatever it takes to win. In a year of uncertainty and ton of adjustments, we are capable of doing that. Even though it is not what you want, we just have to do it.”

Las Vegas barely laid a hand on Tom Brady in a 45-20 loss to Tamp Bay last week. Unless the Raiders, who have just seven sacks (two less than Cleveland star end Myles Garrett), figure out a way to apply some pressure on Mayfield, he's liable to pick them apart. 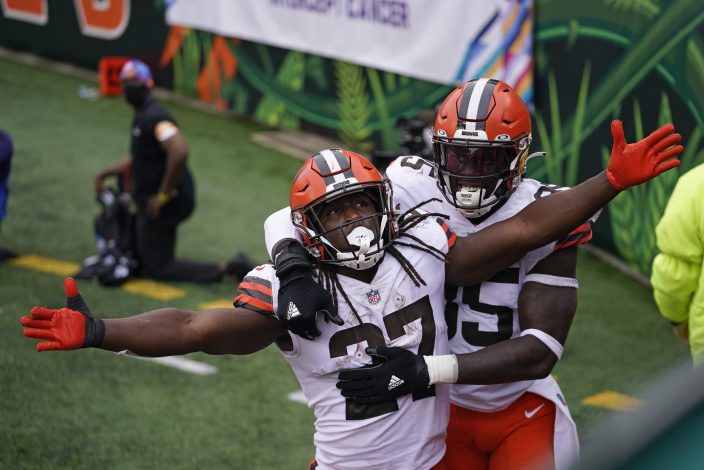 Cleveland Browns' Kareem Hunt (27) celebrates his touchdown with David Njoku (85) during the second half of an NFL football game against the Cincinnati Bengals, Sunday, Oct. 25, 2020, in Cincinnati. (AP PhotoBryan Woolston)

Gruden toyed with making some personnel changes to boost the pass rush and get after Mayfield, who has made some poor decisions when under duress. Other than that, Gruden has been very impressed with Mayfield's maturity this season — with the exception of one area.

“I like my commercials better than his,” Gruden quipped.

Garrett has pushed his way into the conversation for the NFL's top defensive player.

“He's on a mission, mentally,” Browns guard Joel Bitonio said. “Physically, he has always been a freak.”

Cleveland's dynamic defensive end leads the league with nine sacks, and there's hardly a snap when Garrett's not made an impact. He was the AFC's Defensive Player of the Month in October, and there are no signs of him slowing.

“This guy forces fumbles,” Gruden said. "He causes other sacks for other people. He is good against the run. He bats passes down. He forces inaccurate balls. He has a factor about him. His presence is felt a lot. He can play left end, right end or they can push him inside, and he is a factor wherever he plays.

“I wish we had Garrett.”

The holes Raiders running back Josh Jacobs hit as a rookie are closed.

Jacobs ran for 1,150 yards and averaged 4.8 yards per carry last season. But with defenses keying on him, he's not been nearly as effective, averaging just 3.4 yards, which places him 44th out of 46 qualifiers in the league.

Last week, the Buccaneers held him to 17 yards on 19 carries.

"I was embarrassed,” he said. “I feel like it was very embarrassing to me. I went and looked at film. I went and watched practices, I watched previous games. I wanted to see where I can improve my game, what can I bring to this team.”

The chance to play more is a reward for Higgins, who fell from favor with Cleveland's coaches last season but has done everything Kevin Stefanski has asked.

“Since the moment he has been with us, whether on Zoom calls back in the spring or out here on the practice field when we finally got together at training camp, he does his job,” Stefanski said of Higgins. "It is somewhat as simple as that. He does his job, and he makes sure whatever the team needs, he is going to do.”

Raiders quarterback Derek Carr is showing he has more than a big arm.

While Carr has mostly been a pocket passer during his first six seasons in the NFL, Gruden has been looking to get a little mobility out of his quarterback, who twice scrambled for first downs last week.

Carr has run for seven first downs this season, tied for the most since he got 10 as a rookie in 2014.