While he’s leading the NFL in touchdown passes and directing the highest-scoring offense in the league, Seattle Seahawks quarterback Russell Wilson is staying busy with philanthropic efforts away from the field.

This week Wilson and his wife Ciara announced they are contributing $1.75 million to a charter school in the Seattle area. Through their Why Not You Foundation, Wilson and Ciara are contributing about $1.75 million to rebrand an existing charter program known as Cascade Midway Academy, just south of Seattle. The Cascade high school program was set to debut this year before the pandemic forced founders Garth Reeves and Scott Canfield to delay opening.

Canfield said the superstar couple’s generosity will be honored with the school’s name change to Why Not You Academy but that Wilson and Ciara won’t be involved in the school’s day-to-day operations. 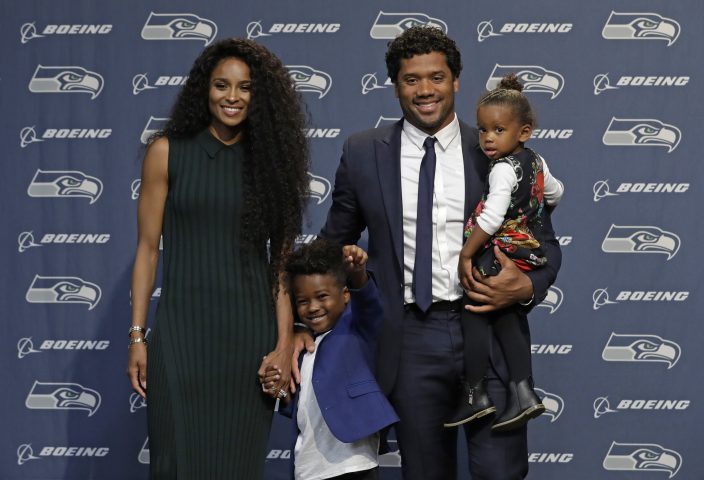 FILE - In this April 17, 2019, file photo, Seattle Seahawks NFL football quarterback Russell Wilson poses for photos with his wife, Ciara; their daughter, Sienna; and Ciara's son, Future, in Renton, Wash. The couple are putting their money and celebrity behind rebranding a charter school, which advocates hope will boost the troubled Washington state charter school sector that has suffered from enrollment problems after years of legal challenges. (AP PhotoTed S. Warren, File)

In an interview with The Associated Press, Wilson and Ciara said they jumped at the opportunity to help launch the school. It focuses on academics, personalized student plans and internships and mentorships for underserved Black and brown students. The couple said they hope this will be the first of many Why Not You Academy sites across the country.

Additionally, Wilson and Ciara partnered with Amazon Home to pay for new furnishings and a small remodel in the home of a pediatric nurse at Seattle Children’s Hospital. Wilson has been a regular visitor to patients at the hospital since he arrived in Seattle.

Amazon Home partnered with a local designer and the Wilsons upgrade Marc Sellier’s home to outfit it with brand new furniture, repaired drywall from a flood’s damage that forced the family to live elsewhere for more than six months.

“Seeing all of the essential workers on the front lines of this pandemic has made every moment we spend together as a family even more precious,” Ciara says. "I’m counting my blessings every day.

"Back in April, nurses and doctors were posting videos of them doing the level up dance, and I’m excited to help support our Hometown Hero with a total refresh of their home so they, too, have a family sanctuary.”

The Atlanta Falcons were expecting a boost to their big-play ability on defense when they signed free agent defensive end Dante Fowler to a three-year contract worth up to $48 million. He had 11 ½ sacks and returned a fumble for a touchdown last season for the Rams. Through seven games this season he has one sack and one forced fumble.

Interim coach Raheem Morris believes Fowler could be on the verge of a breakout that began last week against Detroit. He stopped Adrian Peterson for a loss on a fourth-down run in the second quarter. The stop set up a touchdown that gave the Falcons a 14-7 lead.

“Dante started off the season and he had a little nagging injury or whatever, but he fought through it and was able to play,” Morris said Wednesday. “He’s getting healthier, he’s getting better, he’s definitely getting more physical, as we saw in the last game. And his activity has increased. So I look forward to him absolutely jumping off the screen.”

Morris described the big hit on Peterson as “a big splash play.”

“He has definitely improved in that area and we have to keep him going and we have to bring the people next to him along to get those numbers and those stats,” Morris said.

The Arizona Cardinals, NFL Foundation and Arizona Interscholastic Association have announced a partnership with the InSideOut Initiative, a national movement that helps build the social and character development of high school athletes.

The InSideOut Initiative says it has helped nearly four million athletes in 15 states since its inception in 2015. The organization provides training for education and athletic leaders to support teenagers through high school athletics.

“The Cardinals are proud to support the launch of the InSideOut initiative in Arizona,” Arizona GM Steve Keim said. “Sports of all kinds and at all levels have the unique ability to bring communities together and also instill critical values in young people that last a lifetime. We appreciate the support of our partners in this initiative and the meaningful impact it will have throughout Arizona.”

The Pro Football Hall of Fame will salute the military in November, allowing all veterans and active military members free admission to the museum for the first two weeks of the month.

The Hall’s annual Veterans Day event will take place virtually Nov. 7. This year’s program will be held virtually and include Medal of Honor recipient Kyle Carpenter. Hall of Fame President & CEO David Baker will moderate the program to be streamed live on the hall’s Facebook page.

Carpenter enlisted in the Marine Corps at the age of 19. One month after his 21st birthday, he was in Marjah, Afghanistan, on a rooftop with a fellow Marine and friend on a lookout position. In seconds, Carpenter became disoriented from an enemy grenade blast.

His heart stopped on the medical evacuation, was revived, and he had it happen two more times. Yet five weeks after that day on the roof, Carpenter opened his eyes in a Washington hospital.

Carpenter spent three years at Walter Reed National Military Medical Center, where he endured roughly 40 surgeries to reconstruct his body. In 2014, President Barack Obama awarded Carpenter the Medal of Honor in a ceremony at the White House. In 2017, he graduated with a degree in international studies from the University of South Carolina and since has authored a book, “You Are Worth It: Building A Life Worth Fighting For.”

Larry Gagner played three seasons for the Pittsburgh Steelers as an offensive lineman in the 1960s before a car accident derailed his career and nearly ended his life. He played just one more game with Kansas City in 1972 after that accident in March 1970, and eventually made a living as an artist.

“I knew I had artistic skill in the fourth grade,” Gagner said, adding that his teacher would ask him to do festive drawings on the chalkboard. “I knew early on I had the talent, but I never developed it. I took one art course in high school, but everything was secondary to athleticism, playing three sports.”

After switching from an engineering major at the University of Florida to commercial art, Gagner found his calling after football. The 76-year-old Gagner has hosted several one-man shows, been collected privately, and his work has been exhibited widely throughout Florida’s sidewalk art festivals over the years, receiving numerous awards and prize money.

Gagner also creates paintings and computer-generated images (CGIs) to enhance and communicate the importance of racial and social justice.

“Something needs to be done so the police force is more user-friendly,” Gagner said. “I’m white but there’s the privileged white suppressing Black, Brown and Mexican individuals across the board. There has to be a balance and right now the balance is tipped in the wrong direction.”