The potential Big Ten game of the year lost some luster last week.

No. 18 Penn State was upset by Indiana so instead of returning to Happy Valley to host No. 3 Ohio State with an unbeaten record, the Nittany Lions are trying to avoid going 0-2 for the first time since 2013.

No Big Ten team has tested Ohio State in recent years like Penn State, though the Nittany Lions haven't actually beaten the Buckeyes since 2016. 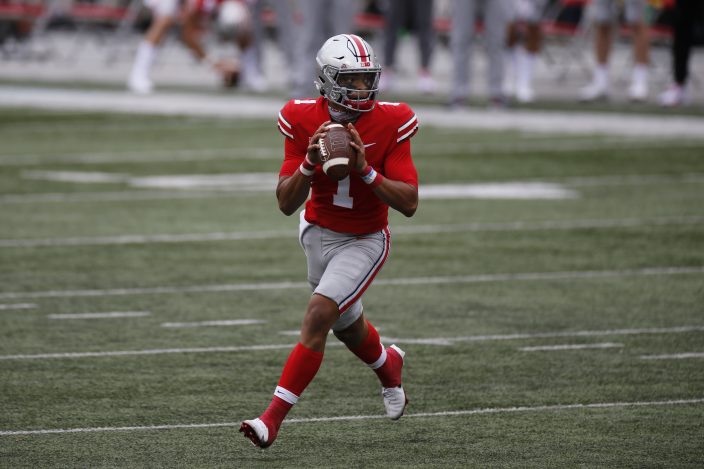 Ohio State-Penn State is the only matchup of ranked teams this weekend, which could be filled with blowouts near the top of the rankings.

If you want to glance ahead, though, the weekend of Nov. 7 could be a monster.

The Nittany Lions lost to Indiana and they also lost another tailback from what was supposed to be a deep group, but hidden in all the mistakes last week against the Hoosiers was a really good defensive performance.

Edge rushers Shaka Toney and Jayson Oweh were tenacious. Can they disturb Justin Fields, who was near perfect last week for Ohio State?

It could be a path to victory for the Penn State because the Buckeyes' running game was less-than-awesome last week in a blowout against Nebraska.

Before a two-week COVID-19 outbreak shutdown, the Kyles were ripping up Southeastern Conference defenses for the 10th-ranked Gators (2-1).

Trask has thrown 14 touchdowns, half to Pitts.

The Gators get back in action at home in the Swamp against Missouri. The Tigers have been surprisingly potent. Trask and Pitts will need to get reconnected and if they do they can both start getting some Heisman Trophy hype.

10 — No. 5 Georgia's winning streak against Kentucky. The Wildcats are struggling offensively and now face what was the best defense in the country before the Bulldogs faced Alabama.

65-17 — Combined score of No. 13 Michigan's two straight victories against rival Michigan State. The Spartans, coming off a loss to Rutgers, visit what will be a mostly empty Big House to face quarterback Joe Milton and what looked like a pretty good Wolverines' offense.

The Lobos make their season debut after having their opener postponed because of COVID-19 issues.

This week's game was supposed to be played in Albuquerque, but local restrictions led to a move to California.

San Jose State, which often starts the season with nonconference games it has little chance to win, has a chance to start 2-0 for the first time since 1987.

The school's budget woes played a huge role in the decision to keep Mason after last season.

And now there is a pandemic.

Still, the Commodores are coming off a COVID-19 outbreak pause with an 0-3 and Mississippi coming to town.

A winless season is possible and money problems might not be enough to save Mason at that point.