BUDAPEST, Hungary— The number of coronavirus-related deaths in Hungary rose to an all-time high on Friday, prompting the government to tighten oversight over compliance with regulations to stem the spread of infections.

Hungarian health authorities reported that 65 patients died over the past 24 hours, while the number of confirmed new cases jumped to 3,286 from 2,194 on Thursday.

The government has not announced new restrictive measures despite the steep rise in infections but Prime Minister Viktor Orban stressed Friday that authorities will hand out fines to everyone failing to wear a mask where required. “I do not believe in multiplying the rules, but in enforcing existing ones,” Orban said in a radio interview.

Hungary’s chief medical officer announced Thursday that wearing masks will be mandatory in restaurants and bars as well except during consumption. Police will be authorized to close establishments that do not enforce the regulations.

The central European nation has recorded 71,413 confirmed infections since the start of the pandemic, including 1,699 deaths. 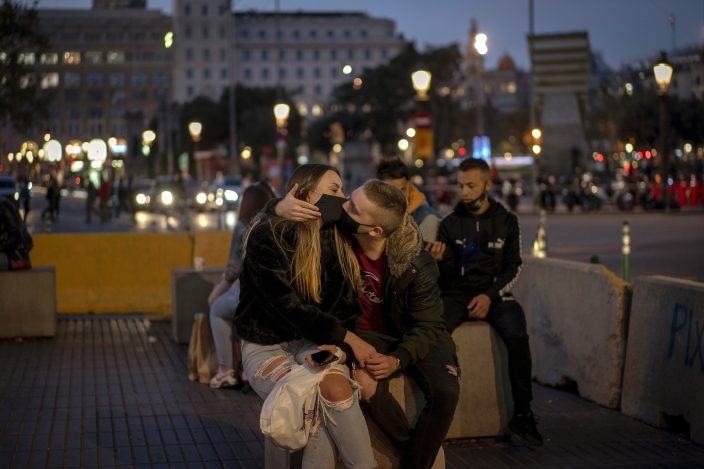 A couple wearing masks kiss in downtown Barcelona, Spain, Thursday, Oct. 29, 2020. Spain's Parliament on Wednesday endorsed an extension of the state of emergency declared by the government until May 9. The measure puts into place a nightly curfew and allows regions to impose more restrictions like the ones the Catalonia announced, limiting movement outside city limits on weekends. (AP PhotoEmilio Morenatti)

— On virus, Trump and health advisers go their separate ways 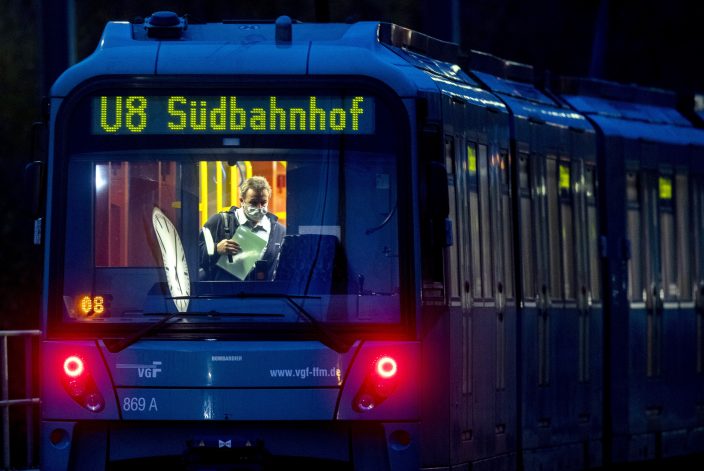 — U.S. public health experts say the nation’s response to the crises has been marked by grave missteps and missed opportunities.

BRUSSELS — Belgian coronavirus cases continued their record rise on Friday before the government met to consider even tougher restrictions on movements that would amount to a quasi-lockdown.

After surpassing the spring record on Thursday, the number of patients in Belgian hospitals broke the 6,000-mark and stood at 6,187, a rise of 263 in a day.

After measures were beefed up earlier in the week, the government was to meet again later Friday to consider further restrictions. Non-essential shops are expected to face temporary closure.

Patients in intensive care units reached 1,057 from 993 the day earlier, and virologists have said that unless tougher measures having a quick impact the saturation point of 2,000 patients will be reached on Nov. 6. Hospital authorities stood first in line to demand action since they say the health system is at the point of collapse.

NEW DELHI — India has reported 48,648 new coronavirus cases, continuing a downward trend in infections even as the country’s caseload has crossed 8 million and is only behind the U.S.

The Health Ministry also reported 563 new fatalities in the past 24 hours, raising the overall death toll to 121,090 on Friday.

The slowdown in the pandemic in India has now lasted more than a month and the country has reported fewer than 60,000 cases for nearly two weeks. According to the Health Ministry, India has 594,386 active cases, which suggests that more people are recovering than those who are testing positive for the virus.

But even as cases are dropping nationwide, the capital New Delhi is facing what could be a third wave of infections.

The national capital, which recently became the worst-hit city in India, is among the few regions in the country that is increasingly seeing a spike in new infections from last week.

New Delhi has 30,952 active cases of the virus. It has been clocking more than 5,000 cases daily from the last three days. The surge in new infections comes at a time when pollution levels have started to soar in the capital, exacerbating respiratory illnesses among many.

TOKYO — Japan’s coronavirus cases has topped 100,000, nine months after a first case was found in mid-January, according to the health ministry figures released Friday.

The country confirmed 808 new cases on Thursday, bringing the cumulative COVID-19 cases to 100,334, including 712 cases found on a cruise ship earlier this year, according to the ministry figures.

About one-third of the cases come from Tokyo, where 221 cases were confirmed Thursday, bringing a prefectural total to 30,677, with 453 deaths. Nationwide, Japan has more than 1,700 deaths.

Experts say Japan has so far managed to avoid “explosive” infections as in Europe and the U.S. without enforcing lockdowns, most likely thanks to the common use of face masks and disinfectant, as well as other common preventive measures including social distancing.

Japan had a nationwide state of emergency in April and May, and experienced a less serious second wave in August, but has since been seeing a slight uptrend in new cases in northern Japanese prefectures, setting off concerns of a surge in the winter.

Experts have urged extra caution at dining and drinking parties and workplaces. According to health ministry data, nearly half of the new cases were in their 20s and 30s.

EL PASO, Texas -- El Paso County officials ordered a two-week shutdown of non-essential activities Thursday after the area’s medical resources were overwhelmed by the illness caused by the novel coronavirus.

County Judge Ricardo Samaniego announced the measure during a virtual news conference Thursday. Among the non-essential services ordered to be closed, effective at midnight Thursday, are tattoo, hair and nail salons, as well as gyms and in-person dining. He also appealed to residents to avoid all non-essential activities. Grocery and drug stores, funeral homes, health care services and government activities were among the activities deemed essential.

“Our hospitals are at capacity, our medical professionals are overwhelmed, and if we don’t respond we will see unprecedented levels of death,” said Samaniego, the county’s top elected official.

ALBUQUERQUE, N.M. — The chief medical officer for the largest hospital system in New Mexico said Thursday that the state is at a pivotal point with the coronavirus as a new high was set for the daily case count and hospitalizations hit record levels.

Dr. Jason Mitchell with Presbyterian Healthcare Services said during a briefing that the data and modeling is clear that New Mexico’s health care system will face a crisis if the spread of COVID-19 continues at its current rate. He warned that by December, equipment like ventilators would have to be shared and hospitals would have to set up tents in parking lots to make room for patients.

“Our goal is to ensure transmission is low enough so we never hit that point,” he said. “This is a serious call to action for us as a community.”

New Mexico on Thursday marked its highest number of hospitalizations since the pandemic began, with state officials saying the number of people in hospital beds due to a COVID-19 infection has increased more than 50% in just seven days.

The number of deaths also are on the rise as daily case counts have increased more than 15% in the past seven days compared to the previous week. In all, nearly 1,000 people have died in New Mexico and Thursday’s count of confirmed infections — 1,082 — smashed a record that was set just days ago.

Adams leads in NYC mayoral primary but 2 others have a ...

In a speech to supporters late Tue ...