Women's rights organizers are preparing for what they say will be the largest protest so far in over a week of mass nationwide street demonstrations in Poland triggered by a court ruling banning abortions of congenitally damaged fetuses.

The march is planned for Friday evening in Warsaw, the capital, in defiance of government appeals that people stay home due to skyrocketing coronavirus infections. Poland hit new records of over 20,000 new COVID-19 cases and 301 deaths on Thursday.

The national public prosecutor has vowed to file criminal charges against organizers of the protests for “causing an epidemiological threat," a charge that could carry a prison sentence of up to eight years. 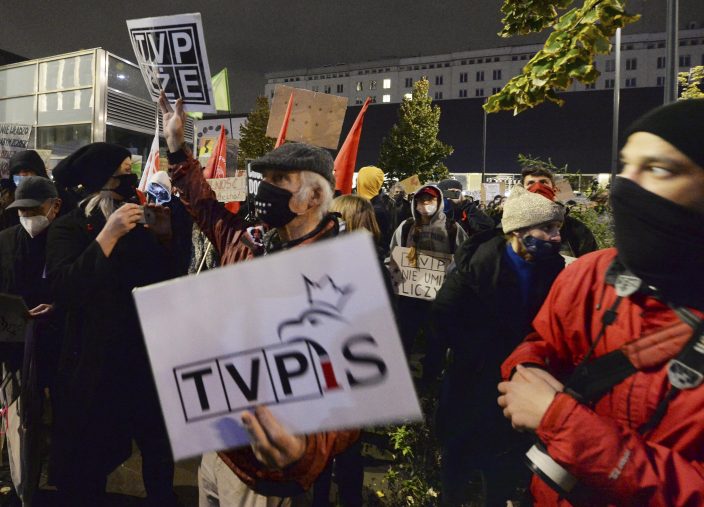 Protesters gathered before Poland's state TVP building with angry chants against the government on the eighth straight day of demonstrations against a court ruling that further tightened the predominantly Catholic nation's restrictive abortion law in Warsaw, Poland, Thursday, Oct. 29, 2020. A massive protest is planned for Friday, despite calls by the prime minister for no gatherings at the time of a steep spike in new COVID-19 infection cases.(AP PhotoCzarek Sokolowski)

The news portal Onet reported Friday that Warsaw's district court was preparing to handle a large number of cases.

The past week of social upheaval followed a ruling last week by the constitutional court, which ruled that abortion in the cases of severe fetal deformities is unconstitutional.

Poland already had one of Europe's most restrictive laws, which was forged in 1993 between the political and Catholic church leaders of the time. It allowed abortion only in the cases of fetal defects, risk to the woman's health and incest or rape.

Last week's constitutional court ruling leaves only the woman's health or pregnancy resulting from crimes as legal reasons for abortion.

Health Ministry figures show that 1,110 legal abortions were carried out in Poland in 2019, mostly because of fetal defects.

Polish women seeking abortions get them in Germany or other nearby nations, or illegally in Poland.

As poorly as the Detroit Lions hav ...