The high-altitude training camp in the Alps was supposed to represent ideal preparation for the Tokyo Olympics.

Instead, a large portion of the Italian swimming team — 13 elite athletes — has been locked in their tiny hotel rooms for nearly two weeks with the coronavirus.

Meals are left on trays outside their doors and the athletes are not permitted to leave. 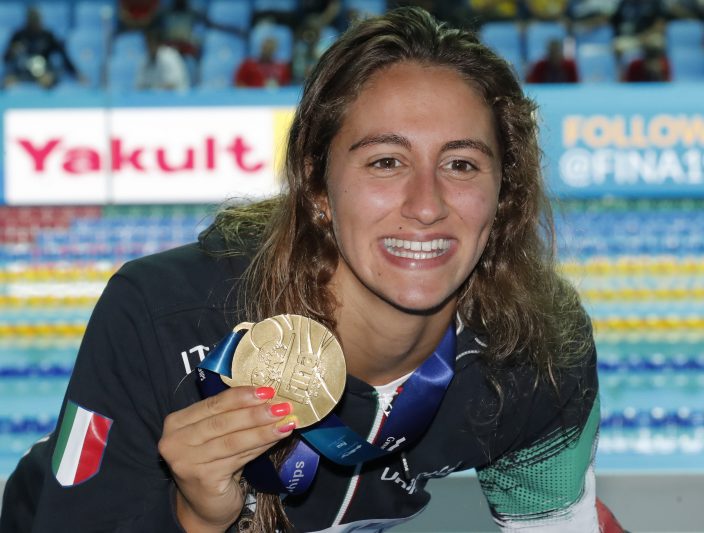 FILE - In this July 23, 2019 file photo, Italy's Simona Quadarella poses with her gold medal after winning the women's 1500m freestyle final at the World Swimming Championships in Gwangju, South Korea. A large portion of the Italian swimming team, 13 elite athletes, including Quadarella, has been locked in their tiny hotel rooms at a high-altitude training camp in the Alps for nearly two weeks with the coronavirus. (AP PhotoLee Jin-man, file)

“I don’t know exactly what prisoners’ lives are like but we are confined,” Gabriele Detti, a gold-medal contender in both the 400- and 800-meter freestyle, said in a telephone interview with The Associated Press. “It’s a bit like home arrest.”

Italian swimmers have been traveling to Livigno, which is located near the Swiss border at an altitude of nearly 2,000 meters (6,000 feet), for years in order to acquire a performance boost for their muscles through the addition of more red blood cells.

Now, though, the question is what effect remaining virtually immobile for so long at high altitude will have on their fine-tuned bodies. 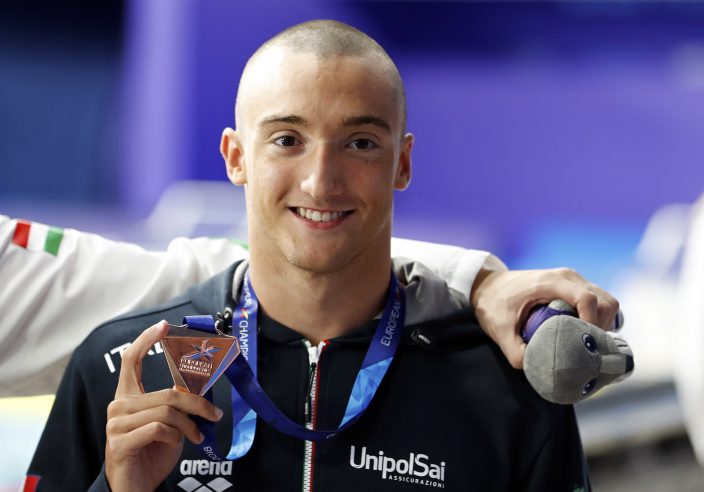 FILE - In this Aug. 5, 2018 file photo, Italy's Federico Burdisso poses with his bronze medal after the 200 meters butterfly men final at the European Swimming Championships in Glasgow, Scotland. A large portion of the Italian swimming team, 13 elite athletes, including Burdisso, has been locked in their tiny hotel rooms at a high-altitude training camp in the Alps for nearly two weeks with the coronavirus. (AP PhotoDarko Bandic, file)

“I’m afraid that everyone could lose muscle mass,” said Stefano Morini, one of three of the team’s staff members to also test positive and be put in quarantine. “When we restart we’ll have to start all over like it’s an entirely new season.”

The hotel rooms are so small that the most the athletes can do is some basic floor exercises.

“If we put an exercise bike inside then we would have to get out just to make room,” said Morini, who is also Detti’s uncle. “We gave them some exercises to do and some of the athletes have told us they are doing them. But we can’t go in to check. I have to talk to them by phone.”

Simona Quadarella, a world champion like Detti, is also among those isolated inside the Hotel Primola.

All of the swimmers tested negative when the training camp began Oct. 11. Then Sabbioni and Mizzau started feeling sick and Giorgetti came down with a bad case of diarrhea, so new tests were ordered for the entire team.

All of the swimmers tested positive again in the latest round of tests on Thursday, although they are now all asymptomatic.

Olympic champion Federica Pellegrini, who was not in Livigno, also had the virus for two weeks before finally testing negative Thursday.

“It’s part of the game,” Detti said. “So many people are getting it, it’s almost more of a surprise not to get it.”

Italy hit another record of confirmed new cases of COVID-19 on Thursday, approaching 27,000, a jump of nearly 2,000 in one day. The first Western country engulfed by the pandemic, Italy’s death toll of 37,700 remains second in Europe behind Britain.

“Fortunately I’m feeling fine and I don’t have any symptoms. But it’s starting to drag on,” Detti said. “On the other hand, it’s the right thing to do, because we present a danger to the healthy people outside.”

The problem is that the clock is ticking for the Tokyo Games, which were already postponed by a year because of the pandemic and are now scheduled to start July 23, 2021.

“If this all ends by the middle of next month and we can get back in the water fairly soon then we’ll just train straight through to July and I don’t think we’ll be affected all that much,” Morini said. “But it all depends on what effect this has on their bodies and their lungs, and how much muscle mass they lose. … It’s a big blow.”

Detti, who won gold in the 800 free at the 2017 worlds after collecting bronzes in the 400 and 1,500 free at the 2016 Rio de Janeiro Olympics, remained optimistic that the Tokyo Games will be held — and he wasn’t overly concerned about losing too much training time.

“We’re far enough away from Tokyo that it doesn’t mean anything. I’m sure that in a few days I’ll be able to start swimming again. The only thing I’m missing is a negative test. I think I’ve lost practically nothing,” he said. “This is the fifth year we’ve been training for this.”

Detti appealed to the IOC and Japanese organizers to set up a clear and efficient protocol for holding the games.

In the meantime, Detti has been patting himself on the back for deciding to enroll in an online university class before traveling to Livigno.

“So at least I’m keeping my brain busy,” he said.

Detti is spending his mornings studying, then he performs his floor exercises before relaxing in the afternoon, staring out at the snow-covered landscape.

“There’s three of us on this floor. Every now and then we step out onto the balcony and we say hello to each other. Just to see each other’s faces,” Detti said. “Somehow, the time passes.”