Opposing defenses are learning success can be had when blitzing Teddy Bridgewater and the Panthers.

In what has become a common theme in recent weeks, the Falcons brought the heat against Bridgewater, sacking him three times and forcing him to throw the ball away on several others. That left coach Matt Rhule pointing the finger directly at his offensive line after Carolina’s 25-17 loss to Atlanta. 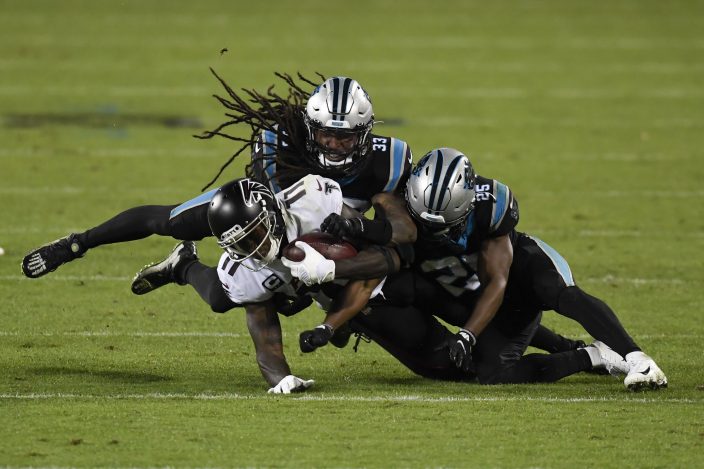 The Falcons did more blitzing than normal and played more Cover-2 on second downs with left tackle Russell Okung out with a calf injury.

“Even on the four-man rush, there were too many times where he had to flush,” Rhule said.

For the second straight game Bridgewater took a costly sack on third down that took the Panthers out of field-goal range. On the play, Bridgewater barely had time to get the ball in his hands before the Falcons were all over him.

Bridgewater hinted the Panthers need to do some self-scouting before their next game as teams are picking up on Carolina's tendencies.

“As the season goes on, teams get more film on you,” Bridgewater said. “You play more games and teams come up with different ways to try to get after the quarterback. I think those guys had a good plan and we did a good job for the most part, but those guys made plays, too.”

Added Rhule: “He was kind of under duress. There was a lot of pressure. (He) took a lot of hits. ... I can’t say that any of us played well enough on offense to deserve to win a game. "

The Panthers' use of wide receiver Curtis Samuel in the backfield is working well. A former Ohio State “athlete” who played both running back and wide receiver in college, Samuel has now scored touchdowns rushing in each of the last two games on inside handoffs. He scored on a 12-yard burst against the Falcons to put the Panthers up early 7-6 on Thursday night. Samuel finished with three carries for 23 yards and is now averaging 4.8 yards per carry on the season, rushing 19 times for 91 yards.

The secondary is really banged-up. Cornerback Donte Jackson appeared to have turned the corner on a nagging toe injury, but it flared up again Thursday night after he intercepted Matt Ryan. Jackson was forced to leave the game, which left the Panthers without their two starting cornerbacks with Rasul Douglas still on the COVID-19/reserve list. The seldom-used Corn Elder and rookies Troy Pride and Stan Thomas-Oliver were forced into playing cornerback after the team released veteran Eli Apple when he refused to practice because of a hamstring injury. Carolina has been playing without safety Juston Burris (rib), pressing undrafted rookie Sam Jackson into duty. Rookies accounted for 40% of all defensive snaps for the Panthers against the Falcons.

“There were guys that were playing on the punt team that were out there all of a sudden covering,” Rhule said.

Jeremy Chinn is beginning to look like the steal of the 2020 NFL draft. Not only is he leading all rookies in tackles, but Chinn has been able to float from linebacker to safety and play multiple positions on defense. On Thursday night, he was the up back on a fake punt and took a direct snap from J.J. Jansen and ran 29 yards for a first down on fourth-and-9. Rhule has called Chinn “special” and believes he's going to be a star in the league.

Third-quarter offense. The Panthers are struggling come out of the locker room in the second half after defenses make adjustments at halftime. Carolina scored 14 points in the first half against the Falcons, but could only manage a field goal after the break, continuing a worrisome trend.

Bridgewater was able to return to the game Thursday night after taking a shot to the neck from Charles Harris, who was ejected on the play. While Bridgewater did finish the game, his status is unclear moving forward, although the Panthers have 10 days in between games.

The Panthers have 10 days to recover from this loss and get things right in time to travel to face the defending champion Chiefs. That won't be an easy task, but if there is some good news it's that Christian McCaffrey is expected to return after missing six weeks with a high ankle sprain. The original prognosis for recovery was from four to six weeks.