The Pennsylvania National Guard arrived in Philadelphia on Friday following days of protests, store break-ins and ATM thefts after a Black man holding a knife was shot at 14 times by police, killing him.

The Guard is currently set to remain in the city through next week, officials said. Their mission is to help quell the unrest that began after the death of Walter Wallace Jr. on Monday. The mayor’s office said the city requested that the guard help with “the current situation and election preparation.”

Wallace's death led the mayor to lock down the city with an overnight curfew that was later rescinded. There were no large-scale protest during the last two nights, and it's not clear if the city is considering additional curfews or restrictions in the coming days. 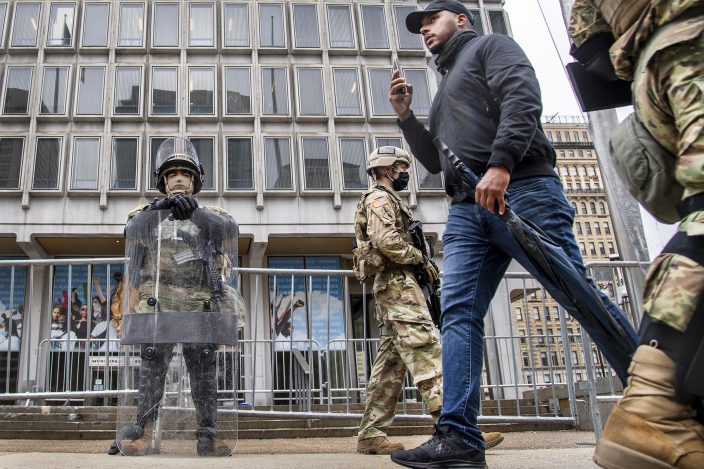 An unidentified pedestrian walks between members of the National Guard as they stand guard in front of the Philadelphia Municipal Services Building in Philadelphia, Pa., Friday, Oct. 30, 2020. (Jose F. MorenoThe Philadelphia Inquirer via AP)

Wallace's family had called Monday for both medical services and police, but only the latter arrived, the family's lawyer Shaka Johnson said. Less than 30 seconds into the encounter, Wallace was dead, felled by a blast of 14 bullets, he said.

A wake and funeral for Wallace has been scheduled for Nov. 7, Johnson said Friday. Footage from body-worn cameras that was taken as police responded to the call shows Wallace became incapacitated after the first shot of 14 that two officers fired at him, Johnson said, describing footage he said police showed him and other members of Wallace’s family before a plan to release it and 911 calls publicly.

The family does not want the officers, who have not yet been publicly identified, to be charged with murder, Johnson said, because they were improperly trained and didn’t have the right equipment to do their job. The video shows “instant panic” from officers whose training taught them only how to open fire, he said, noting he saw no viable attempt from officers to deescalate the situation.

The mayor’s office has said the body cam footage and the 911 audio would be released publicly by the end of next week. Police also faced rebuke from Philadelphia leaders as the anguished city bemoaned the department’s response to a year of extraordinary, and sometimes violent, civil unrest.

Police Commissioner Danielle Outlaw has lamented the lack of a behavioral health unit in a department she joined only this year and has pledged to address that need.

Meanwhile, police declined to comment Friday on accusations that officers pulled a woman from an SUV during unrest in West Philadelphia.

A lawyer for the woman claims she was beaten Tuesday and separated from her toddler for hours, and also was kept in handcuffs in the hospital. Citing an ongoing internal investigation into the matter, police officials would not discuss what prompted the show of force.

The woman has not been charged with a crime, and police won’t say what prompted the show of force.

Her lawyers also criticized the National Fraternal Order of Police for posting images Thursday of an officer holding the child and falsely writing in a caption that the child “was lost” during the unrest.