The Detroit Tigers hired AJ Hinch to be their new manager Friday, giving him a chance to return to a major league dugout after he was fired by Houston in the wake of the Astros’ sign-stealing scandal.

The Tigers said they agreed to terms with Hinch on a multiyear deal.

Hinch replaces Ron Gardenhire, who retired late this season, and he takes over a rebuilding team that is hoping to start climbing the standings behind a handful of highly touted pitching prospects. 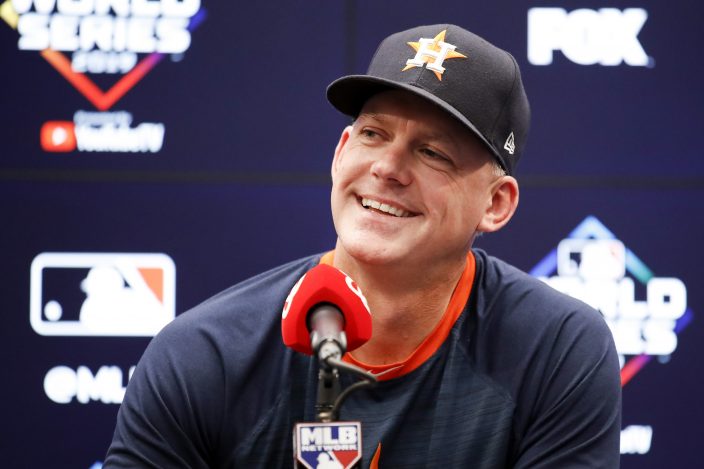 FILE - In this Oct. 27, 2019, file photo, Houston Astros manager AJ Hinch speaks during a news conference before Game 5 of the baseball World Series against the Washington Nationals in Washington. The Detroit Tigers have hired AJ Hinch to be their new manager, giving him a chance to return to a major league dugout after he was fired by Houston in the wake of the Astros’ sign-stealing scandal. (AP PhotoAlex Brandon, File)

For the 46-year-old Hinch, this is an opportunity to revive his managerial career. He guided Houston to the 2017 World Series title, but that championship — and a lot of what Hinch accomplished there — is now viewed in a different light after an investigation found the Astros used a video feed from a center field camera to decode the opposing catcher’s signs, and players banged on a trash can to signal to hitters what was coming.

In January, Major League Baseball suspended Hinch and Astros general manager Jeff Luhnow for this season, then the Astros immediately fired both.

“The last year was the most difficult of my life. It gave me time to reflect, which was such a big part of this process," Hinch said in a statement. "Everything that has transpired over the past year, personally and professionally, has put so much in perspective for me, and reinforced how important it is to do things with integrity and honesty.” 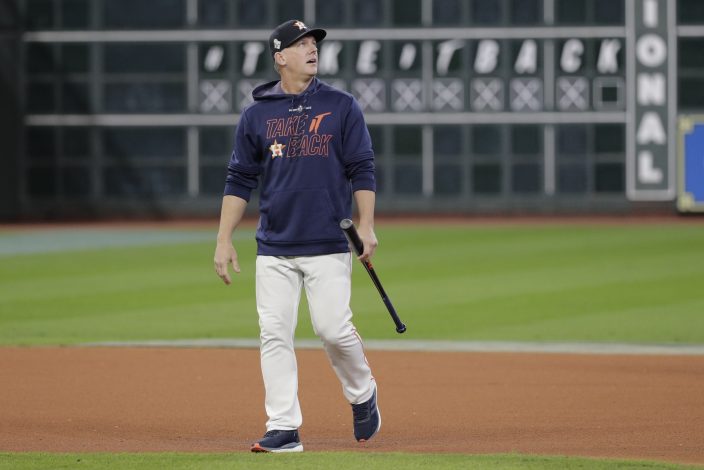 FILE - In this Oct. 30, 2019, file photo, Houston Astros manager AJ Hinch watches batting practice before Game 7 of baseball's World Series against the Washington Nationals in Houston. The Detroit Tigers have hired AJ Hinch to be their new manager, giving him a chance to return to a major league dugout after he was fired by Houston in the wake of the Astros’ sign-stealing scandal. (AP PhotoDavid J. Phillip, File)

Detroit went 23-35 in this shortened season, finishing last in the AL Central. That’s been a familiar spot for Detroit in recent years -- the Tigers lost 114 games in 2019 -- but the team has been able to pick high in the draft during this stretch. Casey Mize, the top overall pick in 2018, reached the majors this year, and Detroit used this year’s No. 1 selection on infielder Spencer Torkelson.

Left-hander Tarik Skubal made his big league debut this year along with Mize. While these youngsters have yet to prove they can make the Tigers contenders again, Detroit will hope Hinch can replicate what he did in Houston.

Hinch, a big league catcher who played for the Tigers in 2003, managed Arizona from May 2009 until July 2010. When he took over the Astros before the 2015 season, they had not finished above .500 since 2008, but Houston had a winning record in all five years under Hinch, including that 2017 World Series title and the 2019 American League pennant.

“Coming into this managerial search we already knew that AJ’s diverse baseball acumen, knowledge of analytics and passion for the game were second to none,” Tigers general manager Al Avila said. “However, we also knew there were some important conversations to have about AJ’s time in Houston. Throughout that dialogue he was clearly remorseful and used that time to reflect on the situation, and we believe he will emerge as a better leader because of it.”

Hinch is 570-452 as a major league manager. His playing career included stops with Oakland, Kansas City, Detroit and Philadelphia.

“On behalf of all of us with the Tigers, I’d like to welcome AJ and his family back to the Detroit community,” said Christopher Ilitch, the Tigers' chairman and CEO. “Throughout the interview process it was clear that AJ had learned from his situation in recent months, and it has changed him in profound ways. Quite frankly, it’s exactly what we wanted and needed to hear."

Hinch joins the Tigers a day after another AL Central team made a big managerial hire. The Chicago White Sox announced Thursday that Tony La Russa was taking over that job.