More than a million tons a year of America's plastic trash isn't ending up where it should. The equivalent of as many as 1,300 plastic grocery bags per person is landing in places such as oceans and roadways, according to a new study of U.S. plastic trash.

In 2016 — the last year enough data was available and before several countries cracked down on imports of American waste — the United States generated 46.3 million tons (42 million metric tons) of plastic waste, by far the most in the world. Between 2.7% and 5.3% of that was mismanaged — not burned, placed in landfills or otherwise disposed of properly, according to a study in Friday’s journal Science Advances.

Between 1.2 million and 2.5 million tons (1.1 million to 2.2 million metric tons) of plastic generated in the U.S. were dropped on land, rivers, lakes and oceans as litter, were illegally dumped or shipped abroad then not properly disposed of, the study found. 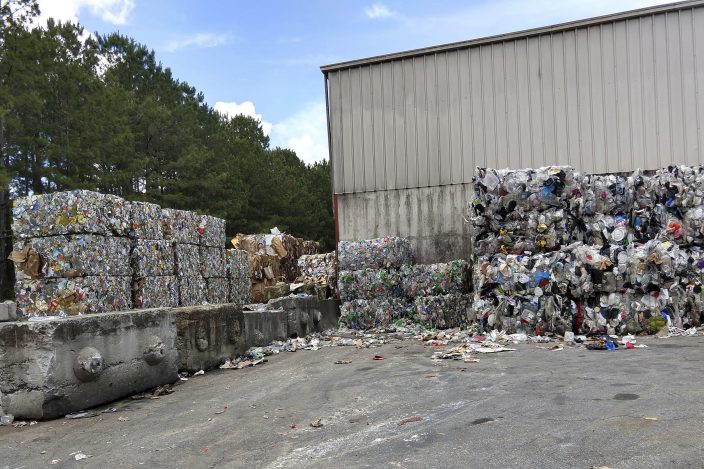 This 2018 photo provided by researcher Jenna Jambeck shows plastic baled for shipment at a materials recovery facility in the United States. According to a study released on Friday, Oct. 30, 2020, more than a million tons a year of America's plastic trash isn't ending up where it should. The equivalent of as many as 1,300 plastic grocery bags per person is landing in places such as oceans and roadways. (Jenna Jambeck via AP)

If you took nearly 2.5 million tons (2.2 million metric tons) of mismanaged plastic waste — bottles, wrappers, grocery bags and the like — and dumped it on the White House lawn, “it would pile as high as the Empire State Building,” said co-author Jenna Jambeck, an environmental engineering professor at the University of Georgia.

Previous studies hadn’t put the United States among the 10 worst offending nations for plastic waste in oceans. That’s because the U.S. Environmental Protection Agency only tracks what goes into official parts of the waste stream such as landfills and recycling centers, and its data doesn't capture the dirtier aspects of plastic trash disposal, study authors said.

So some researchers from previous studies decided to look deeper into what happens to U.S. trash and found so much is improperly handled that America ranks as high as the third worst ocean plastic polluter. The study estimated that 560,000 to 1.6 million tons (510,000 to 1.5 million metric tons) of U.S. plastic waste likely went into oceans. 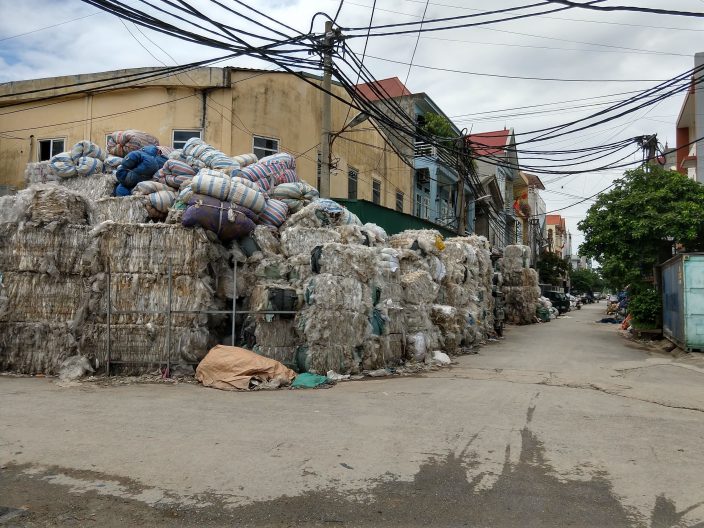 This 2018 photo provided by researcher Jenna Jambeck shows imported film plastic stored on a street until it can be processed in Southeast Asia. According to a study released on Friday, Oct. 30, 2020, more than a million tons a year of America's plastic trash isn't ending up where it should. The equivalent of as many as 1,300 plastic grocery bags per person is landing in places such as oceans and roadways. (Jenna Jambeck via AP)

“We are facing a global crisis of far too much plastic waste,” said study lead author Kara Lavender Law, an oceanography professor at the Sea Education Association in Cape Cod, Massachusetts. The new research "was motivated by the fact that we know the United States was leaking more plastic than estimated,” she said.

The study's estimates range so widely, Law said, because so much of what the researchers explored were waste disposal activities that don't get meticulously measured.

“This more detailed estimate provides a more realistic view of our mismanaged waste and leakage,” said University of Toronto ecology professor Chelsea Rochman, who wasn’t part of the study. “We consume a lot of plastic per capita which then becomes plastic waste. We recycle very little of this material.”

A large but hard to quantify part of the problem involves the 51% of U.S. plastic waste shipped abroad for recycling to countries that routinely mismanage waste, Law said.

“We’re putting this in the blue bin and then it’s getting trucked to Boston,” Law said. “And then it’s getting put on a ship that’s sailing most of the way around the world for somebody to unpack it and pick through it and cut labels off it in hopes that some portion of that material will be turned into (plastic) pellets and into a children’s toy or whatever.’’

The situation has been changing, she said. China and other countries have become more restrictive about taking U.S. trash imports, and more plastic is ending up in landfills here.

“U.S. exports of plastic waste have declined dramatically — nearly 70% — since their peak in 2016,” Joshua Baca, vice president for plastics at the industry group American Chemistry Council, said in an email. Beginning next year, many countries won’t accept U.S. waste experts because of a new international agreement, he said.

Baca said the industry is spending billions of dollars trying to fix the problem, with modernized recycling technology and new business models to reduce waste while urging mandatory recycled content standards for new products and packaging.

The EPA last week launched a new strategy for combatting marine litter and next month will have a recycling summit, said agency spokesman James Hewitt.

“The best thing you can do environmentally is to produce no waste at all,” Jambeck said.