McRib, the fast food sandwich that went viral before viral was a thing, is back.

McDonald's announced Friday that for the first time in eight years it is bringing back its barbeque slathered sandwich with the cult following nationwide.

The McRib will appear on the menus Dec. 2, for a limited time. 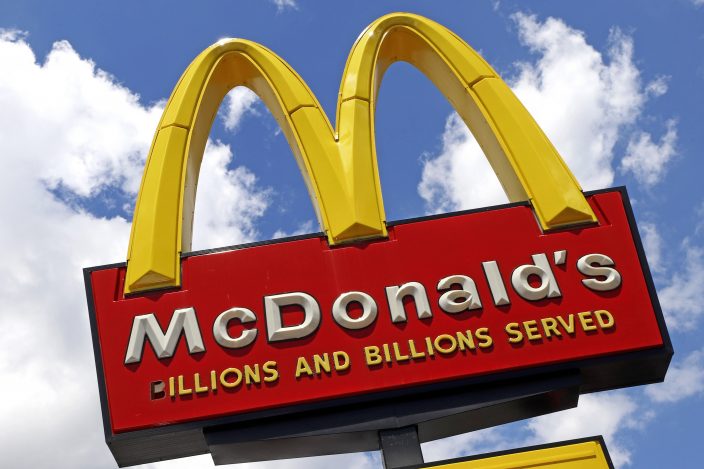 FILE - This June 25, 2019, photo shows the sign outside a McDonald's restaurant in Pittsburgh. The McRib, the fast food sandwich that went viral before viral was a thing, is back. For the first time in eight years, McDonald's announced Friday, Oct. 30, 2020, that it was bringing its barbeque slathered sandwich with the cult following back nationwide starting Dec. 2, and of course, for a limited time. (AP PhotoGene J. Puskar, File)

The McRib is an elusive prize for adherents, who scour the internet for reports of its surfacing at limited locations. There is even a website called the McRib Locator, created to spread the word about McDonald's restaurants that are offering the boneless pork sandwich served with slivered onions and pickles on top.

McDonald's is reintroducing the McRib nationally as it tries to regain its footing during the pandemic.

While most McDonald's had reopened by July after closures forced by the virus outbreak in the spring, many could only operate drive-thrus, or open dining rooms with limited seating capacity.

McDonald’s plans to close 200 U.S. restaurants this year, about half of which are low-volume locations in Walmart stores.

When it released second-quarter earnings in July showing a 68% decline in net income, the world's largest burger chain said it would spend more than $200 million to support franchisee marketing during the second quarter in a bid to get customers back.

It's not impossible to get a McRib any time you want it, but you might need to travel to Germany, where it's on the menu year round.