A Black trooper with the Louisiana State Police was on a break when his cellphone buzzed with an unusual voice message. It was from a white colleague, unaware his Apple Watch had recorded him, blurting out the Black trooper’s name followed by a searing racial slur.

That unguarded moment, sent in a pocket-dial of sorts, touched off an internal investigation at Louisiana’s premier law-enforcement agency that remained under wraps for three years before a local television station reported last month that the white trooper had not even been reprimanded for the racist recording. 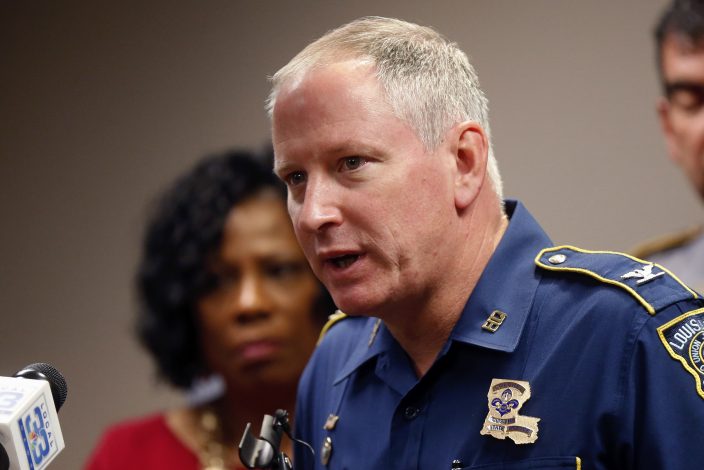 FILE - In this Sept. 19, 2017, file photo, Louisiana State Police Supt. Kevin Reeves speaks at a news conference in Baton Rouge, La. Reeves, the head of the Louisiana State Police, will retire from the job at the end of the month, amid ongoing questions about the death of a Black man in the law enforcement agency's custody and the secrecy around the encounter that is now subject to a federal civil rights investigation. (AP PhotoGerald Herbert, File)

“I believe this to be an isolated incident and I have great confidence in the men and women who serve in the Louisiana State Police,” the agency’s outgoing head, Col. Kevin Reeves, said in response to the controversy.

But an Associated Press review of hundreds of State Police records revealed at least a dozen more instances over a three-year period in which employees forwarded racist emails on their official accounts with subject lines like “PROUD TO BE WHITE,” or demeaned minority colleagues with names including “Hershey’s Kiss,” “Django” and “Egg Roll.”

“The State Police has a real, deep-rooted racism problem,” said David Lanser, a New Orleans attorney with the Law Office of William Most, which obtained the records and emails through a targeted public-records request in 2018 for emails containing racist language. “Denying the existence of systemic and individual racism in the LSP will only serve to perpetuate its serious and often tragic effects on the people of Louisiana.”

Reeves, who abruptly retired this week amid a series of racially tinged controversies, did not respond to a detailed request for comment. A State Police spokesman said only that “these incidents were already addressed by the agency.”

In Louisiana, racial tensions have heightened in recent months amid a federal civil rights investigation into the still-unexplained death of Ronald Greene, a Black motorist taken into custody last year following a State Police chase near Monroe. Reeves faced criticism for his secretive handling of the case, including waiting 474 days to open an internal probe and refusing to release body-cam video that, according to those who have seen it, shows troopers beating, choking and dragging Greene while calling him a “son of a b----.”

State Police records obtained by the AP revealed that Reeves also refused to discipline another state trooper and a longtime administrative assistant last year after they were found to have forwarded overtly racist emails from their account, including a five-page chainmail titled “BE PROUD TO BE WHITE” that claims white Americans have “LOST most of OUR RIGHTS" and addresses law enforcement treatment of minorities. The email questioned why “only whites can be racists” and challenged its recipients to be “proud enough to send it on.”

A State Police attorney said the emails were several years old when they surfaced and there had been “no complaints since” against either employee.

Other records obtained by AP revealed a pattern of racist remarks made by white troopers — such as saying a Black trooper resembled a “monkey” in his uniform.

A State Police captain, whose name was redacted in the records, accused a Black subordinate of lying after he told investigators he was offended by his colleagues repeatedly calling him “Django” after the character in a film about a fictional freed slave. State Police determined the nickname was “not intended to be racially derogatory.”

The same internal investigation delved into the use of the term “Oreo” to describe white troopers’ aversion to working a shift alone with two Black colleagues.

And in another racist exchange, a State Police sergeant was accused of disparaging a Black colleague when a child asked a group of troopers in a restaurant why they left their patrol car idling in the parking lot with the air conditioner on.

“Have you not seen a Hershey’s Kiss when left in the sun?” the sergeant reportedly replied.

It's not clear from the records whether any troopers were disciplined in these incidents.

“This should not exist in 2020,” Collins said. “We really hope the Department of Justice investigates this agency for further possible civil rights violations.”

Looking under the hood of other American police agencies would reveal “if not documented emails, a similar mindset portrayed in everyday conversations among officers,” said Michael Jenkins, a policing expert who teaches criminal justice at the University of Scranton. “Unfortunately, I think this hits on a larger issue in policing that continues to show its face.”

In the freakish Apple Watch pocket dial incident in 2017, Trooper Gus McKay told investigators “the stars couldn’t have lined up any worse.”

“It would be like me accidentally sending a picture of my naked wife to someone,” McKay is quoted telling investigators in State Police records. “It wasn’t supposed to get out.”

McKay told investigators he was sitting around his dinner table with his wife and grandfather preparing to go investigate a traffic crash when he used the slur in reference to a white cousin who can’t pay his bills.

McKay later asked to meet the Black colleague in person, telling investigators he had “dated a Black girl in college” and had Black roommates. “I’m the least person to ever get caught up in this because it means nothing to me.”

The Black trooper who received the recording and whose name was redacted in the documents told investigators he had been offended by the slur, even though he wanted to believe McKay’s explanation.

“I was more offended that you were sitting around with your family and talking in that manner,” the trooper said of McKay.

A week before the incident, he said he had dined with McKay at a restaurant. “So after that, fast forward, you are sitting around having this conversation, it’s like, darn! Why is (McKay's wife) accepting you talking like this? Why is she not mad at you using the word?”

The Atlanta Braves were looking fo ...