Patriots coach Bill Belichick doesn’t expect a surgical procedure that Julian Edelman underwent on his ailing knee this week will keep the receiver sidelined for the rest of the season.

But it will at a minimum keep Edelman off the field Sunday when the Patriots visit AFC East-leading Buffalo (5-2), leaving New England (2-4) down one of its best playmakers as it tries to snap a three-game losing streak.

“We’ll see how the return goes. I don’t think this is a season-ending situation. But we’ll see,” Belichick said. “Hopefully he’ll be back. I know he’s worked awfully hard. Nobody’s more competitive than Julian is. So, he’ll do everything he can to be back out there.” 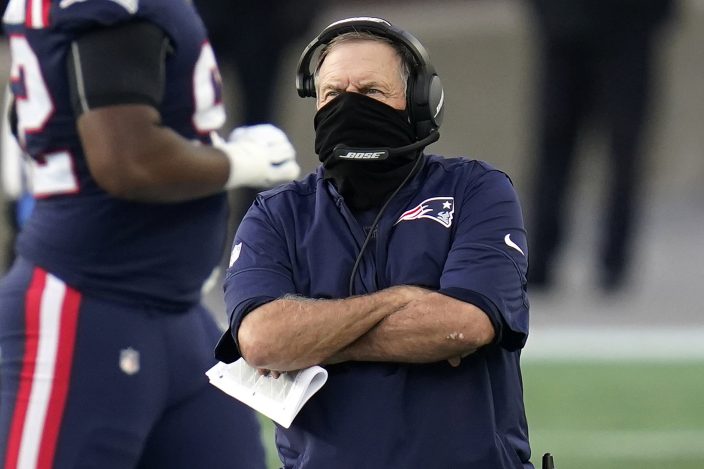 New England Patriots head coach Bill Belichick watches from the sideline in the first half of an NFL football game against the San Francisco 49ers, Sunday, Oct. 25, 2020, in Foxborough, Mass. (AP PhotoCharles Krupa)

Edelman, bothered by his knee for most of the season, missed practice Thursday after being limited on Wednesday. He leads the team with 21 catches for 315 yards but has yet to catch a touchdown this season.

The Patriots could also be without receiver N’Keal Harry, who has been in the concussion protocol since leaving last week’s loss to San Francisco. He is tied for second on the team with 19 receptions for 172 yards and a touchdown.

That would leave New England extremely thin at the position, with Damiere Byrd, second-year players Jakobi Meyers and Gunner Olszewski, and special teams captain Matt Slater as the only healthy options currently on the 53-man roster.

“I definitely don’t want my guys to be injured or hurt, and I’m not exactly sure what’s going on with everybody, but I just pray for their safety and I hope they bounce back soon, because we definitely miss them already,” Meyers said. “But I’m definitely excited for the opportunity, I’m going to do my best to put my best foot forward and continue to try to play the way I know I can play.”

Assuming Belichick elevates at least one receiver from the practice squad between now and Sunday to replace Edelman, the most likely option would be Isaiah Zuber. The undrafted rookie has already been promoted from the practice squad to the active roster three times. He’s appeared in three games, rushing twice for 21 yards and catching one pass for 16 yards.

“Zuber’s got good skill. He’s got good size, runs well, catches well. He’s made some plays with the ball in his hands. So, we’ll see," Belichick said.

In addition to Zuber, Belichick said practice squad receivers Mason Kinsey and Kristian Wilkerson are possibilities to be called up.

“They’re all young players, working hard, getting better. We’ll see. There may be an opportunity here. We’ll see how things shake out as we go through the next couple of days,” Belichick said. “Zuber’s been up for some games this year. But I’d say all those guys have good qualities to work with. … If they they get an opportunity, I hope they’re ready to take advantage of it.”