Even if Rashard Higgins was shown a shortcut, he probably wouldn't take it.

The sure-handed wide receiver, who made several clutch plays — and his biggest and best catch as a pro — for the Browns last week in a win over Cincinnati after Odell Beckham Jr. got hurt, has run anything but a straight route to success.

"I had to work for everything I ever got,” Higgins said. 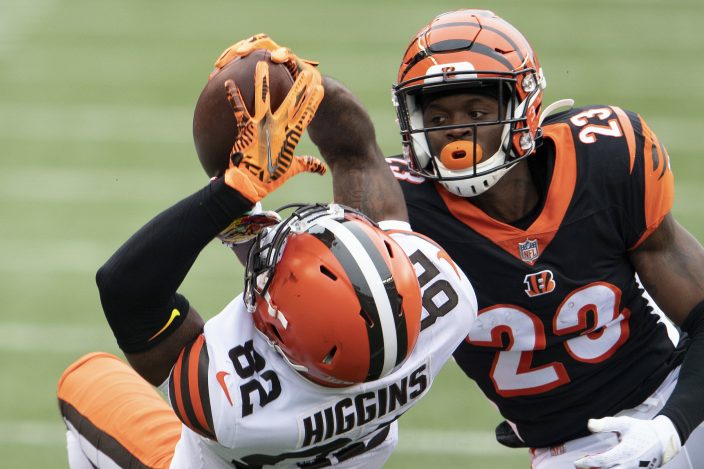 Those principles have been tested the past two seasons.

A fifth-round draft pick in 2016, Higgins endured a 1-15 rookie season and a 0-16 calamity in his second year with Cleveland. He became a favorite target for quarterback Baker Mayfield in 2018, catching 39 passes, four of them for touchdowns.

Last year, Higgins was an outcast. He was slowed by a knee injury, clashed with former coach Freddie Kitchens, and found himself out of the lineup. Higgins was beaten out by KhaDarel Hodge in training camp this year for Cleveland's No. 3 receiver spot, was a healthy inactive for two games and went into last week's game with just five catches for 53 yards and two touchdowns.

He waited for his turn, and when it came after Beckham went down with a knee injury, Higgins came through with a performance that suited his nickname: “Hollywood.”

Higgins caught six passes for 110 yards and made his biggest contributions on Cleveland's final drive, which began with 1:06 left, the Browns down four and out of timeouts.

He had already caught a couple passes on back-shoulder throws from Mayfield, who competed 21 straight throws after an 0 for 5 start, before making a play that to this time is the high point of his career.

With 39 seconds remaining, Mayfield told Higgins he wanted to try something different.

“When the play was called, I was like, ‘Baker just be ready for a back shoulder,’” Higgins said. “I was expecting him to be on top. Baker said, ‘To hell with that. I am throwing the ball down the field, and you are going to get it.’

"Those were his exact words.”

Higgins made them prophetic, launching himself to make a 30-yard catch by snagging the ball with his back almost parallel to the ground. Mayfield then stopped the clock with a spike, and on Cleveland’s next play dropped a winning TD pass to rookie Donovan Peoples-Jones in the right corner.

“Looking back at it, I just went up and tried to high point the ball and come down with it,” Higgins said of his clutch catch. "Like I have been saying, whatever I can do to help the team, I am here for it.”

Asked if it was his best grab, Higgins smiled.

Even before his breakout performance, Higgins had impressed Browns first-year coach Kevin Stefanski and his staff.

“I gave everybody a clean slate,” Stefanski said. “Since the moment he has been with us, whether on Zoom calls back in the spring or out here on the practice field when we finally got together at training camp, he does his job. It is somewhat as simple as that. He does his job, and he makes sure whatever the team needs, he is going to do.”

Higgins, who will move into the starting lineup with Beckham out, attributed his strong performance Sunday to preparation.

“I get my confidence during practice,” he said. “I try to go hard in practice. Therefore, when game time comes, it is just easy. I say my hardest thing is just picking up all the new plays and trying to learn all the positions just in case a guy goes down, just like what happened it the game.”

The Browns track all their players during practice with GPS, so they can see how hard Higgins works.

“He is one of those guys that can just run all day, and I do appreciate that about him,” Stefanski said.

Higgins shrugged when asked how he expects his role to expand.

To him, nothing has changed.

“When the ball comes my way, just make the most of it,” he said. “Still just doing what I do, playing football.”

NOTES: The Browns donated $350,000 — with some of the money coming from players and coaches — to East Cleveland City Schools as part of the NFL’s Inspire Change grant program. The funds are to help close the digital divide in the lower-income district. ... Browns RG Wyatt Teller (calf) and TE Austin Hooper (appendectomy) will miss Sunday's game.