Cleveland's defensive standout practiced Friday after missing two days with an ankle injury and expects to play Sunday against the Las Vegas Raiders.

“It’s doing all right. Getting old, so just trying to take my time when I can,” Garrett said after practice. "I should be about normal.” 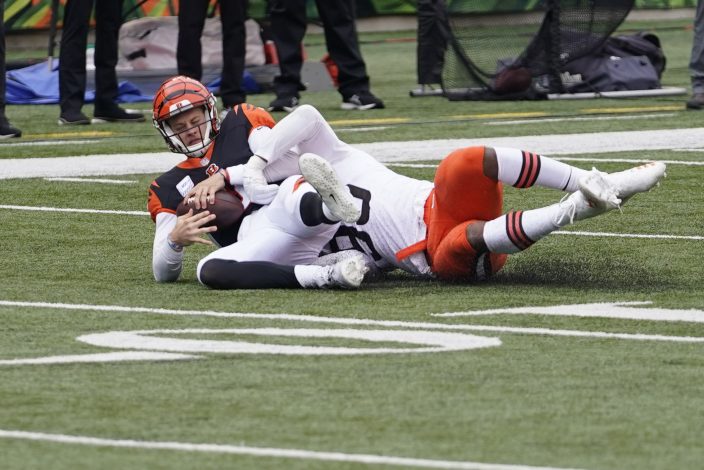 Garrett, who leads the league with nine sacks and seems to make a game-changing play every week, said he tweaked his ankle leading into last week's game against Cincinnati and then again while recording two sacks and forcing a fumble in the 37-34 win.

He was held out of practice this week, mostly as a precaution because the Browns (5-2) don't want to take any chances with their best defensive player.

Coach Kevin Stefanski believes Garrett will be able to handle his usual workload against the Raiders (3-3).

"Making sure we are keeping tabs on him, but he is ready to go,” Stefanski said.

The Browns practiced indoors, so media members were unable to attend because of COVID-19 guidelines and were unable to gauge Garrett's injury. Rain is in the forecast for Sunday, and Garrett is ready to adjust how he plays if necessary.

“I’ll probably be doing a little bit more run stopping than pass rushing,” he said. "But whatever happens, I’ll be ready for it.”

The No. 1 overall pick in 2017 has taken his game up a level this season after being suspended for the final six games last year after he struck Pittsburgh Steelers quarterback Mason Rudolph in the head with a swung helmet.

Garrett was named the AFC's Defensive Player of the Month in October.

“I gotta stay passionate about the performance the entire defense is putting out there and not just me and not settle with what’s going on right now,” he said.

While the Browns will have Garrett back, they'll be without will be starting right guard Wyatt Teller and tight end Austin Hooper.

The Browns have a bye next week.

Hundreds of Ethiopian immigrants get warm welcome in Is ...

Hundreds of Ethiopian immigrants a ...

Greek city to use Christmas money for more ICU beds