Michael Jordan expects to field a winning team when 23XI Racing begins NASCAR competition next season. The first move toward victory lane came Friday in a partnership with Joe Gibbs Racing and Toyota.

Jordan partnered with current NASCAR driver Denny Hamlin as new team owners and will field the No. 23 for Bubba Wallace. The formation of 23XI — pronounced twenty-three eleven — was completed in September but the final pieces weren't confirmed until Friday.

Joe Gibbs Racing won last year's Cup Series championship with Kyle Busch and both Hamlin and Martin Truex Jr. are in contention for this year's title. Hamlin has driven for Toyota and JGR since 2008, so an alliance with any other manufacturer would have been a significant conflict of interest. 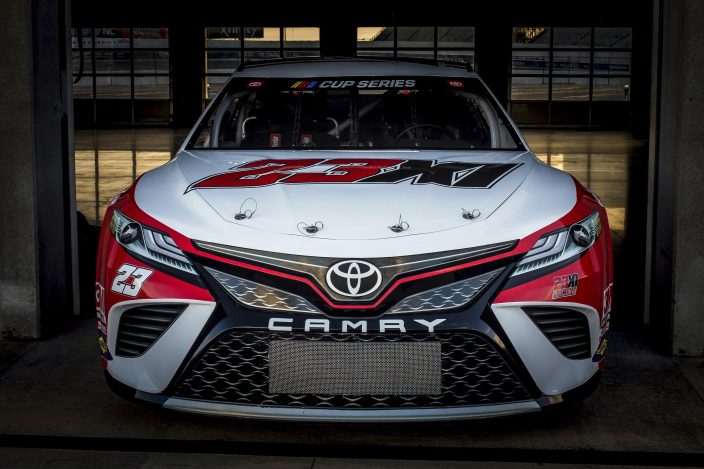 This image provided by Toyota Racing, shows the new No. 23 Toyota Camry at at Charlotte Motor Speedway, Saturday, Oct. 24, 2020, in Charlotte, N.C. Hall of Fame basketball player and Charlotte Hornets owner Michael Jordan expects to field a winning team when 23XI (pronounced twenty-three eleven) Racing begins NASCAR competition next season. The car will be driven by Bubba Wallace and will be a Toyota in an alliance with Joe Gibbs Racing. (Toyota Racing via AP)

“My main goal for 23XI Racing is to be competitive for a championship as soon as possible,” said Jordan. “Our partnership with Toyota and Joe Gibbs Racing gives us the equipment, resources and expertise to do it.”

JGR is the flagship Toyota team and considered one of NASCAR's top organizations. Gibbs has won five Cup titles since 2000 and last year celebrated a banner season in which its four drivers combined to win 19 of 36 races.

But 23XI is not a fifth Gibbs car — that's against NASCAR rules — and Hamlin had to prove its independence for the team to launch. 23XI will be a JGR customer and operate from a shop owned by Germain Racing, which is going out of business.

Mike Wheeler, who led Hamlin to five wins over three seasons including the first of Hamlin's three Daytona 500 victories, will be crew chief for the No. 23. Wheeler this past season was the competition director for Leavine Family Racing, a team aligned with Gibbs that is closing.

“The way the rule is meant to be interpreted is its not a fifth JGR car, so they're not providing services to us for free,” Hamlin said. “They are not providing us the cars for free and everything is independent. We are not using any of their staff. It's our own organization, we have our own payroll, our own vendors that we have to pay, so this organization stands on its own.”

That means 23XI will also have to win on its own, no small feat at NASCAR's elite Cup level. Hamlin noted that teammate Busch, the reigning NASCAR champion, just won his first race of the season Wednesday night in the 34th event of the year.

Tempering Jordan's expectations will be a challenge, but Hamlin insisted the goal is to win in their inaugural season. Hamlin said they are also already looking at expanding to two cars for 2022.

“He understands this is going to be building process,” Hamlin said of Jordan, winner of six NBA championships with Chicago. “Winning is a broad term. Your odds of losing are much greater than they are of winning. Is he expecting to win in the first half of the season? I don't think that's a realistic expectation. But I do believe he thinks we can go out there and win in our first year.”

Hamlin likened the startup effort to 2009 when Tony Stewart became co-owner of a winless Cup team that scored four victories in Stewart's first season as owner-driver. In its third season, Stewart-Haas Racing won the Cup title.

“This is a lot like what Tony did,” Hamlin said. “When he came over there, he brought winning and relevance to it, and all of a sudden, very good people wanted to work for them. And they started to build, and started to build, and next thing you know they've got a championship organization.”

Ed Laukes, a vice president of Toyota Division Marketing at Toyota Motor North America, said the manufacturer will prove 23XI with the best equipment and resources available. He noted the turnaround Furniture Row Racing had once it aligned with Gibbs and Toyota. Furniture Row was a middle of the pack team before the partnerships and then won the 2017 title with Truex.

Success will be critical, Laukes said, to both Toyota and NASCAR benefitting from Jordan's involvement.