The annual hoopla around the celebrity-studded Met Gala is so intense, it's often forgotten who the real star is: the fashion exhibit inside.

This year, it's the only star. A stylish Costume Institute show at the Metropolitan Museum has opened, six months behind schedule. But what’s six months when you’re covering 150 years of fashion?

And that’s the point, in more ways than one, of “About Time: Fashion & Duration,” which explores the concept of fashion through time. Time is a flexible concept, it argues. It is not linear, at least not where fashion is concerned. Ideas revisit themselves through the decades, even the centuries. 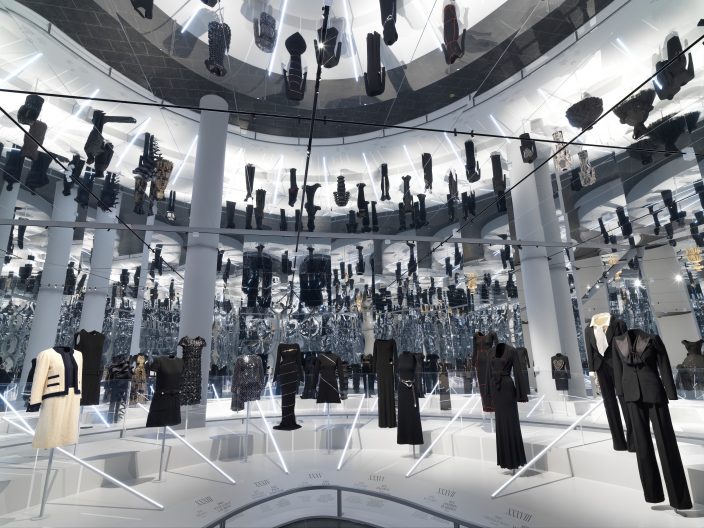 That was the central concept even before the exhibit, traditionally launched by the Met Gala in May, was waylaid by the pandemic — which changed everything, including our concept of time. (How many times have you heard someone ask what day or month it is?)

So the fact that “About Time” was able to open at all is cause for celebration. As the Met’s director, Max Hollein, said in opening remarks: “We could not imagine, when we chose the name for this exhibition more than a year ago, how apt the title would become.”

Of course, everything is different this year. Instead of speaking in person at the annual press preview, Hollein and curator Andrew Bolton spoke virtually, and masked, in taped remarks. And crowd size is being restricted, in accordance with guidelines for museums — likely not a bad thing in terms of the viewing experience. 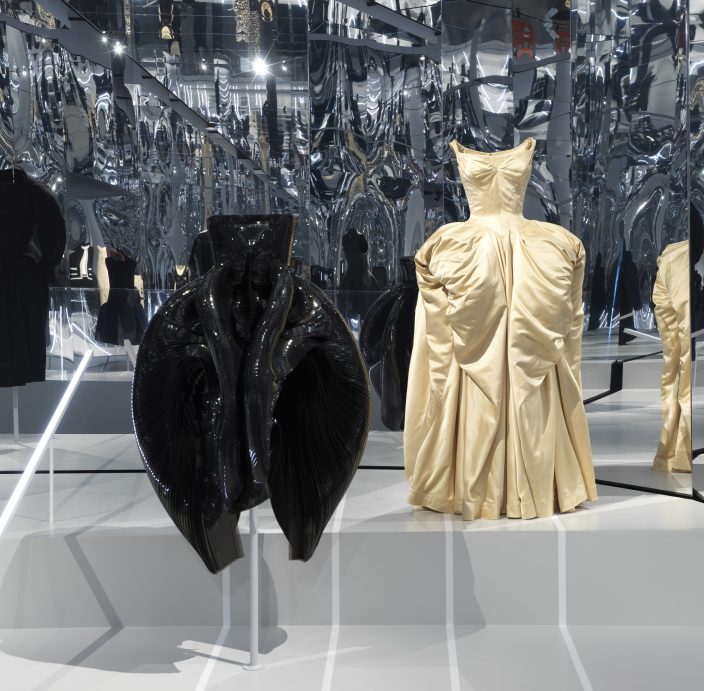 Visually, the show is concise — smaller than recent extravaganzas like the opulent “Heavenly Bodies: Fashion and the Catholic Imagination.” Nearly every garment on display is black, save a couple in white or cream. Rather than a collection of loaned items from across the globe, the exhibit consists almost entirely of items from the Institute’s collection.

The design of the show, by Es Devlin, is intended to convey the inner and outer workings of a clock. There are two clocks, two galleries, and two timelines. One timeline is chronological, beginning in 1870, when the museum was founded (this year marks the 150th anniversary.) The other is what Bolton calls “a disrupted timeline of fashion" — involving flashbacks and fast-forwards, or “interruptions.”

Bolton has chosen novelist Virginia Woolf and her writings on time as an inspiration; she is what he calls the show's “ghost narrator." Three quotations are read aloud in the galleries by Nicole Kidman, Meryl Streep and Julianne Moore, who starred in the 2002 film “The Hours,” based on Michael Cunningham's book that was inspired by Woolf's “Mrs. Dalloway.”

And the concept of an hour is illustrated, literally, by illuminated “ticks” of a clock on the floor. Garments are placed in 60 pairs — as in 60 minutes —- each pair containing one item from the chronological timeline and one from the disrupted one. What they show is that ideas, shapes, techniques or materials constantly refer back (or project forward) to each other over time.

A 1919 silk satin and chiffon gown with a so-called “barrel skirt” — named for its shape — is accompanied by a highly exaggerated barrel-shaped dress from 2012-2013 by Rei Kawakubo of Comme des Garcons in radically different material: polyester felt with sequins.

The fashion world, like most industries, has been hit hard by the pandemic. But in his own virtual remarks, designer Nicolas Ghesquiere, creative director of show sponsor Louis Vuitton, made reference to a possible silver lining: “The pause the pandemic has imposed on many of us has also created a certain space to reflect on where we are and where we are going,” he said. “Even in the most turbulent times, art, fashion and culture can help us navigate change and frame how we see the world anew.”

The show ends with a solitary piece from designers Viktor & Rolf, a white patchwork dress made up of pieces from their archive of fabric swatches. It's meant as a metaphor, Bolton noted, “for the future of fashion and the importance of community, collaboration and sustainability.”

Turkey pardons on the menu at White House ceremony

In an annual Thanksgiving traditio ...