John Franklin-Myers has been 0-7 before. The New York Jets defensive lineman knows it can get a lot worse.

He has lived it. Loss after heartbreaking loss.

Franklin-Myers somehow maintained a positive outlook and sacked any woe-is-me thoughts that dared enter his mind while his Greenville High School football team in Texas went 0-40 during his four years. 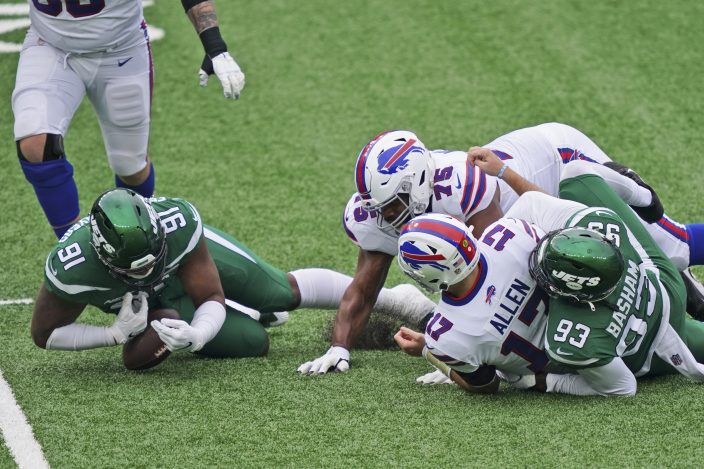 “Yeah, I mean, it’s one of those things that obviously was frustrating, but you get an opportunity to play this game, you know?” Franklin-Myers said in a phone interview with The Associated Press. "My mentality was, look, each and every time I get out there on that field, I’m going to make my teammates better and I’m going to try to get better. And that’s the way we went into each and every week — we feel like we have a chance to win.

“And that’s the mentality I’m going to have no matter who I’m playing, I don’t care.” 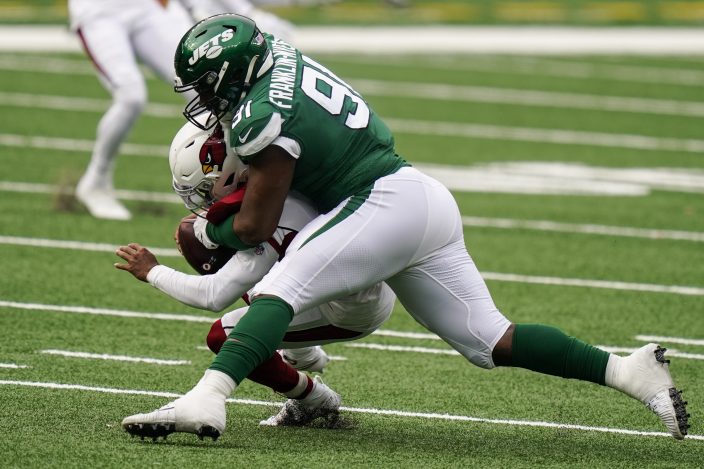 The odds are certainly stacked against Franklin-Myers and the Jets this week. They're taking on the defending Super Bowl champion Chiefs in Kansas City on Sunday, trying to avoid the team's first 0-8 start since 1996.

That has been the 24-year-old Franklin-Myers' approach for as long as he can remember. On and off the field.

He was born in Los Angeles, moved to the Dallas area as a youngster and was adopted by his grandfather Billy Ray Myers — hence the hyphenated last name. Franklin-Myers' grandfather instilled in him an unwavering desire to achieve greatness in whatever he did.

That meant on the football fields and basketball courts. And, especially, in the classroom.

“My grandpa didn't allow us to slack off,” Franklin-Myers said. “Honestly, I didn't bring home bad grades because of him. I might've brought home like one B and it was like an 89 or something. So, I'm at the table until he gets tired, doing extra work."

Billy Ray Myers died in 2011 without seeing his grandson put all those high school losses behind him. But his tough-love approach left a lasting legacy with Franklin-Myers.

“He's part of the reason why I'm here,” Franklin-Myers said. “He's kind of my motivation, still, playing this game.”

Franklin-Myers wasn't heavily recruited out of high school despite standing out in all-star events in the widely scouted Dallas area.

“These coaches were like, ‘We took a look at your film and we liked your film,’" he recalled. “'The problem we have is, if you can’t help your high school team win, what makes you think we can count on you to help us win?'”

So, Franklin-Myers ended up staying close to home, gained weight and muscle and became a standout defensive end during four years at Stephen F. Austin.

And he was guided by a hunger to be better than anyone else on the field.

“I’m a prideful person, so naturally I’m not going to be the type of person to get beat up every single play,” he said. “I’m going to go out there and I’m going to make my presence be felt. By the end of the game, they’re going to feel me.”

The Los Angeles Rams made him a fourth-round pick and he had two sacks as a rookie, learning about life in the NFL from the likes of Aaron Donald, Ndamukong Suh, Michael Brockers and Dante Fowler Jr.

“You can't even dream about that, especially as a rookie, to be with all those guys,” Franklin-Myers said.

He capped his first NFL season with a strip-sack of Tom Brady in the Rams' Super Bowl loss to New England.

“I’ve still got the gloves and the jersey,” Franklin-Myers said with a laugh. “That’s the stuff I’ll never forget.”

Despite that promising start, Franklin-Myers was among the Rams' final roster cuts last year. The Jets pounced on him, but a foot injury and then a high ankle sprain kept him sidelined the the entire season.

New York still expected big things from him and he has flashed as one of the team's few bright spots. Franklin-Myers has a sack, a fumble recovery and six quarterback hits this season.

“Knock on wood, if he stays healthy, you’re going to see a dominant player in him, especially rushing the passer,” defensive coordinator Gregg Williams said. “I think he’s just scratched the surface. He fits in well with us, and I really like how he’s progressing.”

Franklin-Myers refuses to look back at any of the obstacles he has overcome in a negative light. Not all those losses in high school. Not the coaches who thought he was too small or didn't know how to win. Not the Rams, who cut him after just a year.

He's forever grateful to everyone who has simply given him a chance. And that has made him feel like a winner every step of the way.

“I've always been having to prove myself, and that’s fine with me, you know?” Franklin-Myers said. “All you ask for is an opportunity. What you do with that opportunity, that’s on you. I’ve been given opportunities and I just try to take advantage each and every time."

Sounders back in West final after 1-0 win over FC Dalla ...

James O’Connor has been recalled a ...