CANBERRA, Australia — Australia has announced it will spend 500 million Australian dollars ($351 million) to secure COVID-19 vaccines for the Pacific and Southeast Asia “as part of a shared recovery for our region from the pandemic.”

The government said it would use a range of advance purchase agreements with manufacturers via the global COVAX Facility plan, which aims to ensure virus vaccines are shared with all nations.

“We are committing an additional AU$500 million over three years towards this effort,” it said. “The funding will further help ensure that the countries of the Pacific and East Timor are able to achieve full immunization coverage, and will make a significant contribution toward meeting the needs of southeast Asia. 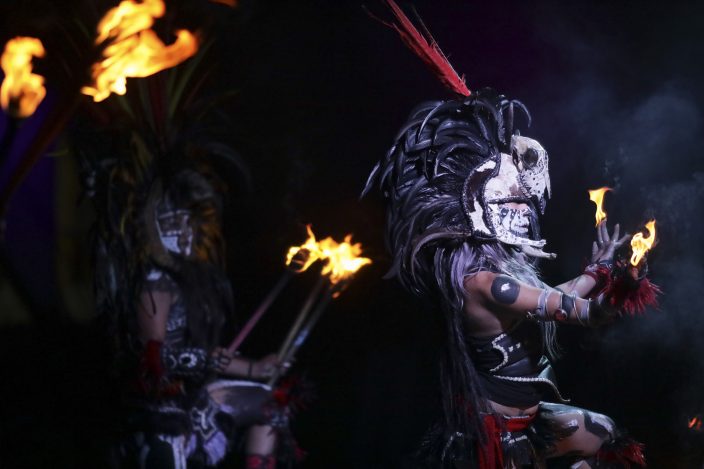 Dancers dressed in traditional costumes perform during an Aztec ceremony to honor of the thousands of residents from the Iztapalapa district who have died from complications related to COVID-19 in Mexico City, Friday, Oct. 30, 2010. Mexico's Day of the Dead celebration this weekend won't be the same in a year so marked by death, in a country where more than 90,000 people have died of the new coronavirus. (AP PhotoEduardo Verdugo)

“A fast, safe vaccine rollout ... will mean we are able to return to more normal travel, tourism and trade with our key partners in the region.”

Meanwhile, officials in Victoria state reported just one new case of COVID-19 on Saturday as Melbourne residents head into a weekend of greater social freedom.

Figures from the state’s Health Department show an average of just 2.4 new cases per day for the past 14 days. 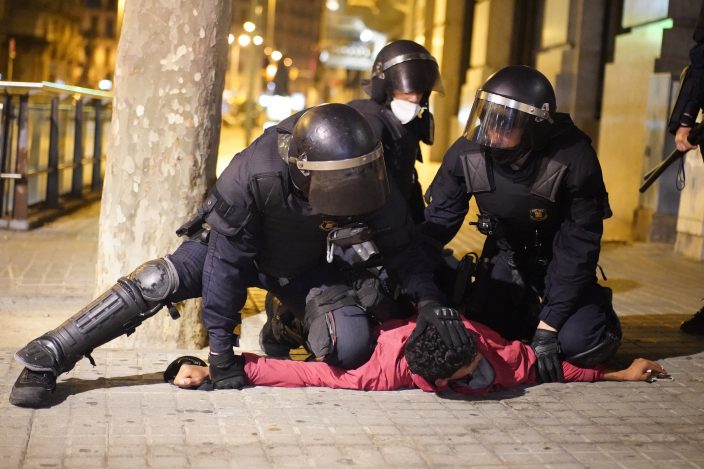 A demonstrator is detained by police officers during clashes in downtown Barcelona, Spain, Friday, Oct. 30, 2020. Clashes have erupted in a central Barcelona square between anti-riot police and hundreds who had gathered to protest the mandatory closure of bars, restaurants and other businesses in the latest effort to rein in on coronavirus outbreaks. (AP PhotoJoan Mateu)

The easing of restrictions means families can visit each other at home. A 25-kilometer (15-mile) travel limit remains in place and outdoor gatherings are still capped at 10 people. 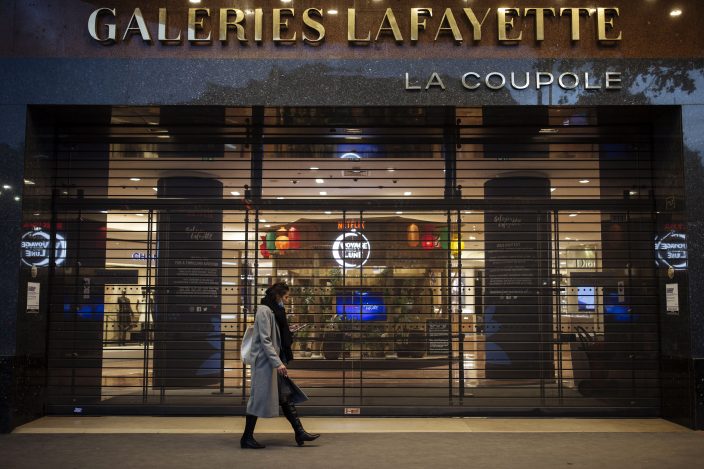 A woman walks by Galeries Lafayette's closed entrance in the center of Paris, Friday, Oct. 30, 2020. France re-imposed a monthlong nationwide lockdown Friday aimed at slowing the spread of the virus, closing all non-essential business and forbidding people from going beyond one kilometer from their homes except to go to school or a few other essential reasons. (AP PhotoLewis Joly)

— 2nd study testing a COVID-19 antibody drug has a setback

— A multi-state coronavirus surge in the countdown to Election Day has exposed a clear split between President Donald Trump’s bullish embrace of a return to normalcy and urgent public warnings from the government’s top health officials. 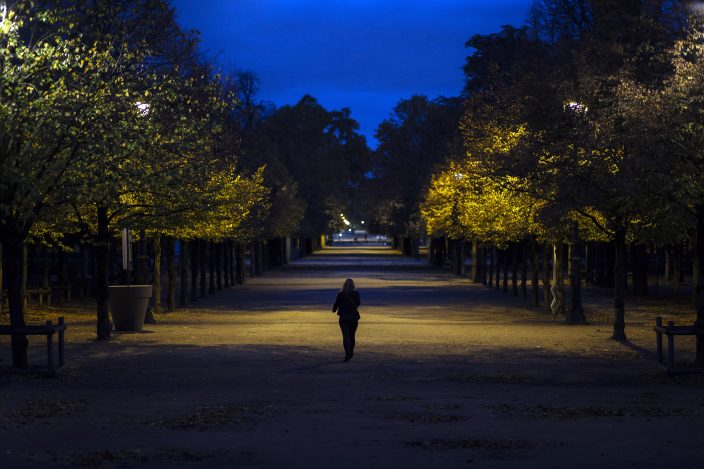 A woman walks by the empty Tuileries gardens in the center of Paris, Friday, Oct. 30, 2020. France re-imposed a monthlong nationwide lockdown Friday aimed at slowing the spread of the virus, closing all non-essential business and forbidding people from going beyond one kilometer from their homes except to go to school or a few other essential reasons. (AP PhotoLewis Joly)

— European countries are calling for the World Health Organization to be given greater powers to independently investigate outbreaks and compel countries to provide more data, after the devastating coronavirus pandemic highlighted the agency’s numerous shortcomings.

— Day of the Dead will undoubtedly be harder this year for Latino families across the U.S. torn apart by coronavirus. The annual Mexican tradition of reminiscing about departed loved ones is typically celebrated Nov. 1-2. 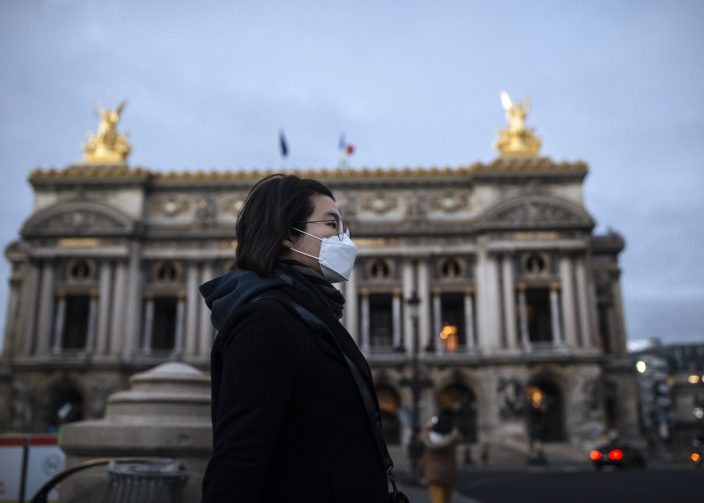 A woman walks by the Opera Garnier in the center of Paris, Friday, Oct. 30, 2020. France re-imposed a monthlong nationwide lockdown Friday aimed at slowing the spread of the virus, closing all non-essential business and forbidding people from going beyond one kilometer from their homes except to go to school or a few other essential reasons. (AP PhotoLewis Joly)

“This is a dangerous time. We’re moving the wrong way,” the Democratic governor said as he urged Kentuckians to wear masks in public to protect themselves and those around them. 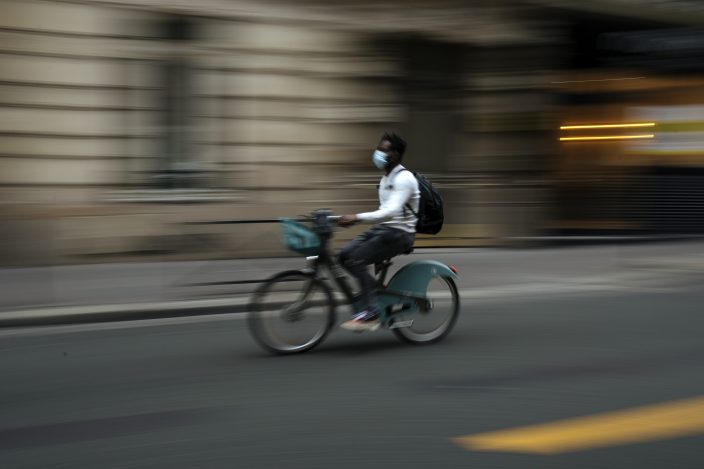 A man wearing a protective face mask rides his bike past closed shops in Paris, Friday, Oct. 30, 2020. France re-imposed a monthlong nationwide lockdown Friday aimed at slowing the spread of the virus, closing all non-essential business and forbidding people from going beyond one kilometer from their homes except to go to school or a few other essential reasons. (AP PhotoLewis Joly)

The state’s positivity rate reached 6.19% — the highest level since May 6, he said.

The recent surge has led to rising hospitalizations. On Friday, there were 974 patients hospitalized in Kentucky due to the virus, the governor said, noting the number of COVID-19 patients in intensive care rose to 241. 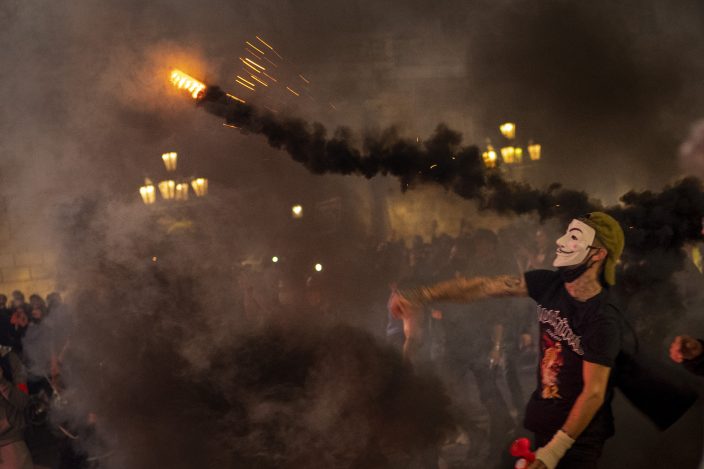 A demonstrator throws a smoke bomb against police during clashes in downtown Barcelona, Spain, Friday, Oct. 30, 2020. Clashes have erupted in a central Barcelona square between anti-riot police and hundreds who had gathered to protest the mandatory closure of bars, restaurants and other businesses in the latest effort to rein in on coronavirus outbreaks. (AP PhotoEmilio Morenatti)

ORLANDO, Fla. — Walt Disney World says it plans to lay off more than 11,000 unionized workers because of the new coronavirus, bringing the total number of pandemic-related job casualties at the Florida resort to almost 18,000 positions.

Disney World said in a letter to state and local leaders Thursday that the 11,350 union workers — mostly part-timers — will be laid off at the end of the year. Company officials previously had said that another 6,400 nonunion Disney employees in Florida would lose their jobs.

Earlier this week, 720 Disney World actors and singers were laid off since many of the live entertainment shows at the Florida resort have gone dark, according Actors’ Equity Association, the labor union representing the performers.

The layoffs are part of a decision by The Walt Disney Co. last month to eliminate 28,000 positions in its parks division in California and Florida because of the pandemic.

Disney’s parks closed last spring as the coronavirus began spreading in the U.S. The Florida parks reopened this summer with restrictions on how many people could be in the parks at any given time and new requirements for social distancing and mask-wearing. The California parks have yet to reopen because of restrictions by the state of California.

TOPEKA, Kan. — Kansas counties that require masks have seen about half as many new coronavirus infections as counties that don’t mandate face coverings, a study has found, as cases statewide surged again to record levels.

“Do Masks Matter in Kansas” produced by the Institute for Policy and Social Research at the University of Kansas found that counties that require masks saw a decrease in their seven-day rolling average of daily cases per 100,000 population starting 14 days after the mandate was issued.

“Masks, it is important to note, do not eliminate COVID, but they significantly slow the spread of the disease — at least here in Kansas,” said Donna K. Ginther, the institute’s director, in a video presenting the study’s findings. The Institute for Policy and Social Research at the University of Kansas has been tracking the impact of COVID-19 on the state, The Kansas City Star reported.

Kansas Gov. Laura Kelly tried over the summer to issue a statewide mask mandate, but most of the state’s 105 counties opted out. This week, Kelly and top Republicans agreed to try to persuade counties that are coronavirus hot spots to impose mask requirements rather than having the state step in. But she said she could still call the Republican-controlled Legislature into special session to impose a statewide rule.

Counties without mask mandates have seen the seven-day rolling average of daily cases per 100,000 steadily increase. And in September, those counties started to have higher case rates compared to counties with a mask mandate, Ginther said.

“We found a 50% reduction in the spread of COVID-19 in counties that had a mask mandate compared to those without,” Ginther said.

NEW YORK CITY — The coronavirus can spread more extensively in households than previous research suggests, and kids can transmit it at about the same rate as adults do, according to a new study.

The study shows how important it is for people who test positive to isolate themselves within a home, and for them and everyone else to wear masks when they are in common areas, researchers said.

The Centers for Disease Control and Prevention released the study Friday. The researchers focused on 101 households in Tennessee and Wisconsin.

In each home, after a person was diagnosed, other household members agreed to undergo nasal swab or saliva tests and kept symptom diaries. Nearly 300 people participated. About 100 were identified as the first to be infected and the other 200 people lived with them.

About 53% of the household members tested positive, and most were diagnosed within five days of the time the first person got sick. Previous studies have estimated the secondary infection rate at around half that.

SAO PAULO — Four tourists were arrested on Thursday in Brazil for allegedly falsifying COVID-19 tests in an attempt to reach what some say is the world’s most beautiful beach.

The two men and two women were arrested after landing in Fernando de Noronha, a group of islands offshore northern Brazil, according to a statement posted on the archipelago’s official website. The Brazilians, who took a private jet and arrived Wednesday night, were accused of falsifying documents, using falsified documents and criminal association.

Fernando de Noronha reopened to tourists on Oct. 10, requiring COVID-19 tests that show negative results and administered no earlier than one day before departure. The visitors presented test results that were dated three days prior to their arrival.

KNOXVILLE, Tenn. — Three tigers at a Tennessee zoo are in quarantine after one tested positive for the coronavirus, according to a Friday news release from Zoo Knoxville.

Two other tigers, 11-year-old male Tanvir and 6-year-old female Arya, are presumed positive while their tests are being processed. All three animals have experienced mild coughing, lethargy and decreased appetite.

The new virus cases brought the number of cases statewide to 13,520, according to the Department of Health. That means that roughly one out of every 65 people currently has an active infection. The state has ranked second in the nation for new cases per person over the last two weeks, according to Johns Hopkins researchers. There were about 1,359 new cases per 100,000 people.

The Department of Health also reported 12 new deaths, bringing the tally of COVID-19 deaths to 415 since the pandemic began. October has been the state’s deadliest month as health officials reported 192 of those deaths this month.

The number of hospitalizations declined by 10 people to 403, breaking a run where hospitalizations hit new highs for five days in a row. About 31% of general-care hospital beds and 37% of ICU beds remained available in the state.

BALTIMORE — The U.S. now has 9 million confirmed cases of the coronavirus, according to data compiled by Johns Hopkins University, as infections continue to rise in nearly every state.

It took two weeks to reach the mark from 8 million, the fastest jump of 1 million yet. It had taken more than three weeks for the total to rise from 7 million to 8 million.

Confirmed U.S. cases are on the rise in 47 states. Deaths are up 14% over the past two weeks, averaging more than 800 every day. The virus has now killed more than 229,000 Americans.