Vote-counting was far from over when Tanzanian opposition leader Seif Sharif Hamad was frustrated enough to call people onto the streets. As thwarted observers alleged the most blatant election fraud in the country’s history, and with no way to challenge the results in court, there was little to do but protest.

But Hamad and others didn’t get far. As they walked toward a roundabout in the semi-autonomous region of Zanzibar on Thursday, police fired tear gas, then arrested them — Hamad's second arrest in a week. A party official, Ismail Jussa, was badly beaten by soldiers and hospitalized. On the eve of the vote, at least 10 people in Zanzibar were killed.

“We were a cradle of peace,” their colleague, ACT Wazalendo party campaign manager Emmanuel Mvula, told The Associated Press after describing the events. But after witnessing Tanzania’s sharp turn away from democratic ideals, “I’m worried for our future as a nation.” 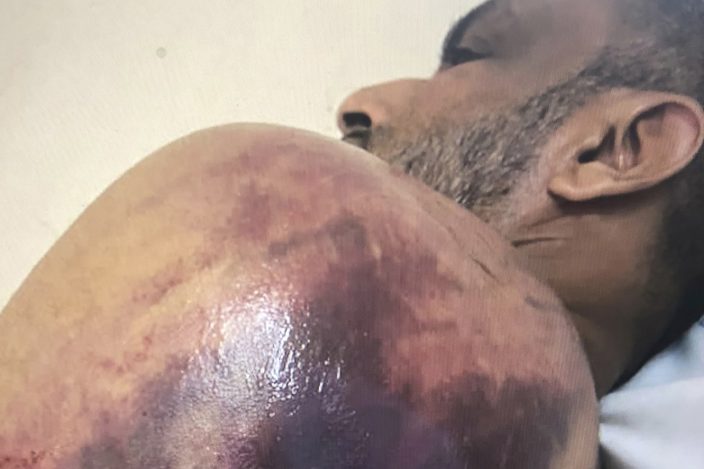 This photo shows Ismail Jussa, an official with Tanzania's opposition ACT Wazalendo party, after what the party alleges was a severe beating by soldiers on election day on Wednesday, Oct. 28, 2020, in Zanzibar. Vote-counting was far from over when Tanzanian opposition leader Seif Sharif Hamad was frustrated enough to call people onto the streets. As thwarted observers alleged the most blatant election fraud in the country’s history, and with no way to challenge the results in court, there was little to do but protest.(AP Photo)

That populist President John Magufuli late Friday was declared the overwhelming winner of Wednesday’s election was no surprise. But the ruling party’s victory in almost all parliament seats has shocked even critics who had warned of creeping repression under Magufuli’s first five years in power.

Now the Chama Cha Mapinduzi party, a version of which has ruled since independence, has enough seats to change the constitution and perhaps extend the presidency’s two-term limit, a goal of some party leaders and a much-criticized trend in parts of Africa.

Tanzania's events may be overlooked globally amid the U.S. election and COVID-19 pandemic, but many in Africa are watching in dismay as a country once praised for promoting freedoms is said to be dismantling them one by one. 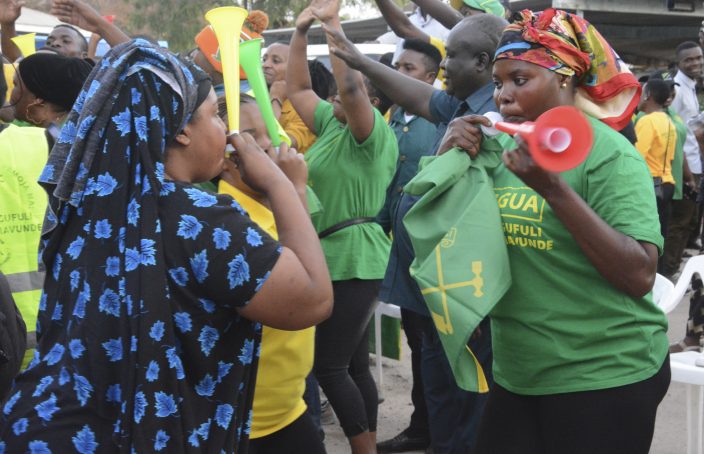 Ruling party Chama Cha Mapinduzi party supporters celebrate Thursday, Oct. 29, 2020, in Dodoma, Tanzania, after the party emerged victoriously in the Wednesday presidential vote. The main opposition leader Tundu Lissu has rejected the result, and cited alleged widespread irregularities in the election, saying that whatever happened wasn't an election and was like "spitting in the face of democracy." (AP Photo)

“Irregularities and the overwhelming margins of victory raise serious doubts about the credibility of the results announced,” the United States said, later noting credible reports of “the use of force against unarmed civilians.”

Top opposition candidate Tundu Lissu has rejected the vote and called for peaceful protests, urging the world not to recognize the results.

Tanzania’s electoral commission has called all the votes legitimate. It denied fraud allegations ranging from ballot box-stuffing to a massive internet slowdown to the rejection of thousands of election observers from polling stations. Few international observers were allowed.

Spokesmen for the government and commission did not respond to requests for comment.

For Frederick Ssempebwa, watching has been painful. As a young man in the 1960s, he arrived in Dar es Salaam from neighboring Uganda to study and found himself in a vibrant “hub of activity for liberation groups” across the continent. Tanzania, under first president Julius Nyerere, was one of Africa’s most influential countries.

“Tanzania was the envy of the region,” Ssempebwa, a prominent lawyer, recalled in an interview.

The East African nation at the time was a single-party system, but Nyerere was highly respected and “agitation for opening the political space came much later,” Ssempebwa said.

Now, he said as chair of Tanzania Elections Watch, a regional group of eminent persons monitoring the vote, “this time around, it’s an unwelcome one-party state.”

Everything has been done by the ruling party to make sure the opposition doesn’t return, Ssempebwa said. "They’ll play around with the constitution the way they want.”

He doubts that opposition demonstrations will be allowed, leaving quiet resentment, “which means no reason for the international community to intervene.”

With several other high-profile elections across Africa in the coming months, including in Uganda, he says the events in Tanzania likely will have a negative effect on regional leaders. The idea of non-interference in other states’ matters remains strong.

“It’s sad for the continent,” he said.

The African Union has not issued a statement since the vote. The East African Community, a rare observer mission, said the vote was generally “conducted in a credible manner.”

On the streets of Tanzania, some people speak carefully. Magufuli’s administration has targeted dissenting voices in the media, civil society and elsewhere, at one point trying to make it illegal to publish any data not approved by the government.

But the president has won many supporters for his corruption-fighting and his push to develop the economy.

“Like any other African leader, he found the powerful machinery from colonial era intact and ready to implement what he wishes. He used it for various purposes, some progressive and others regressive,” Sabatho Nyamsenda, who teaches political science at the University of Dar es Salaam, said in an email.

If there are flaws in the electoral process, Tanzanians should find solutions themselves, Nyamsenda said.

“I would say the elections were fair enough,” one resident of the capital, Jenifa Mahinige, said Friday. Another Dodoma resident, Wilson Samson, said the vote had some hiccups but none that could be said to undermine the results. He urged opposition parties to learn from past mistakes.

The mistakes weren’t ours, said Mvula, the opposition ACT Wazalendo campaign manager. He is compiling election reports from every constituency, and with party observers blocked from polling stations, kicked out or arrested, “I can say confidently that 98% of polling agents didn’t participate fully.”

Even the official forms to report suspected wrongdoing weren’t handed out, he said. “So, this was a total sham.”

At age 43, Mvula is already looking to Tanzania’s younger generation for optimism: “They question things.” Reversing the past five years can happen, he said, though it will take time.

“In a country of 60 million people, we cannot just give hope to a few individuals who are not democratic and bring in dictatorial tendencies,” he said.