A 54-year-old nurse became convinced the coronavirus “hated” her during the first seven months of Italy’s outbreaks. Those are Cristina Settembrese's words for it.

Settembrese, who specializes in treating patients with infectious diseases, faced huge risks during the long hours she spent in close contact with sick and dying COVID-19 patients. She was careful to scale her precautions to match and always tested negative despite getting exposed multiple times.

The nurse's encounters with the coronavirus started Feb. 21, the day Italy’s first domestic cases were confirmed in the country's north. Nurses and doctors were among the newly infected, so Settembrese immediately volunteered to care for people in Codogno, home to Italy's patient zero and just an hour’s drive away from where she worked at Milan’s San Paolo Hospital. 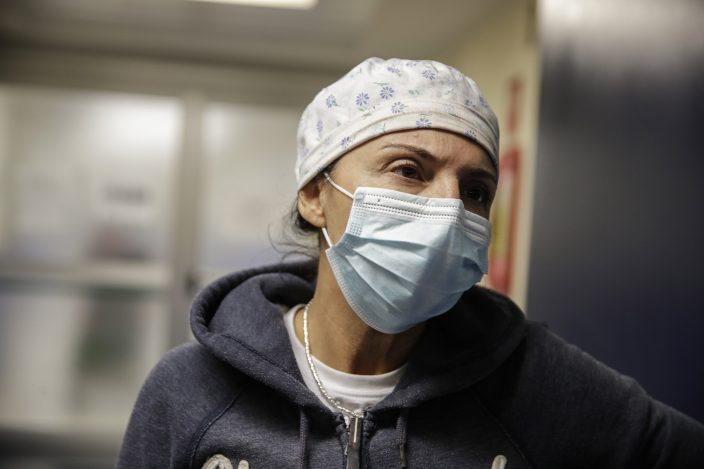 Soon, her own hospital was under siege as the virus spread in the Lombardy region, its first foothold beyond Asia. Settembrese, a single mother, immediately sent her 24-year-old daughter to live with her parents. Alone at home, the nurse slept on the couch, partly to be ready in case she was called in to work, partly as a response to a trauma that took her by surprise.

When case numbers finally decreased and her hospital emptied of COVID-19 patients, she found it hard to share the relief she observed in other people, those who had not seen the trauma of her ward. On a short summer break, she saw the virus' fall return in the unmasked faces of fellow vacationers. And her worry grew.

Still, the resurgence came quicker -- and earlier -- than even Settembrese feared. This week alone, the number of cases in her hospital surged by one-third. It also showed up closer to home. 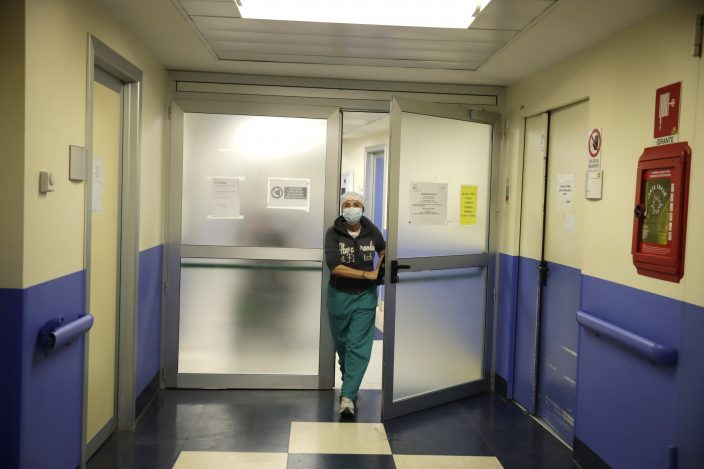 Here, in her words, is her journey through the pandemic, so far.

“By August, we had no more admissions for COVID. We had almost a month without any cases. And from September, instead we started to see again some pneumonia, then some patients with COVID, still not serious cases, and we closed the ward for patients with meningitis, tuberculosis, our usual patients....Then as the cases increased and the hospital admissions went up, the pneumonia got more aggressive, forcing them to reopen the intensive ward upstairs. The switch has happened: The virulence is much stronger, and we see it in the patients.” 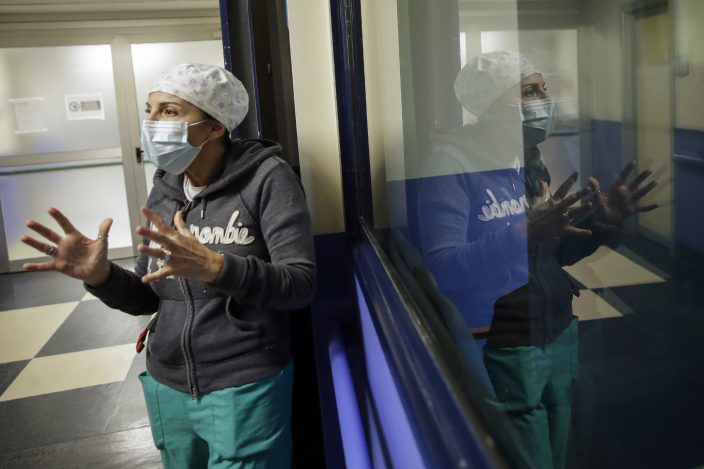 “I can say on a numeric level, the numbers have soared....Nurses have been recalled from the wards they had gone back to. We are calling them back to help us, because alone we cannot keep up. There are just a few of us, and we cannot keep up with people who are wearing helmets (to assist breathing)." 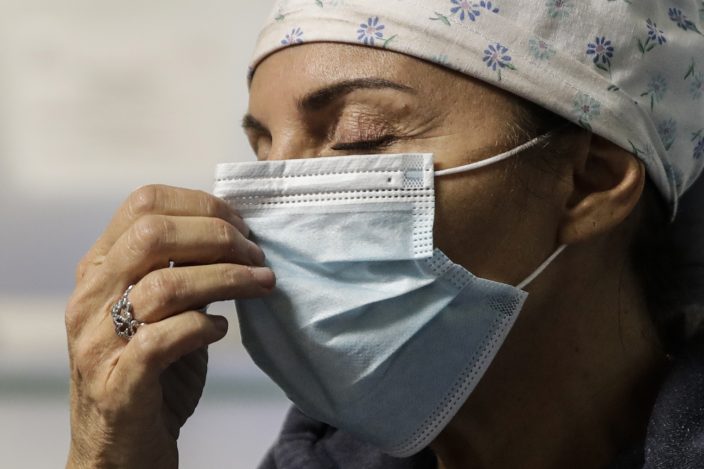 Nurse Cristina Settembrese gestures during an interview with the Associated Press outside the intensive care unit after finishing a night shift, at the San Paolo hospital, in Milan, Italy, Thursday, Oct. 15, 2020. (AP PhotoLuca Bruno)

“I am experiencing this very badly. I didn’t honestly expect to. I cried a lot, four months ago, I cried really a lot. I lost many young people, who I still carry with me. I hadn’t yet overcome these deaths....All of us nurses, we are feeling a psychological damage. I am experiencing this as a second wave, and I think we still have seen nothing.

“There are not the terrible deaths this time. Now, with the treatments, you manage to avoid these intensive therapies. We have found a pseudo-palliative treatment, let’s say. We know how to manage the cases better.

“But I am experiencing it inside exactly like before. For us, it is like reliving a nightmare.“ 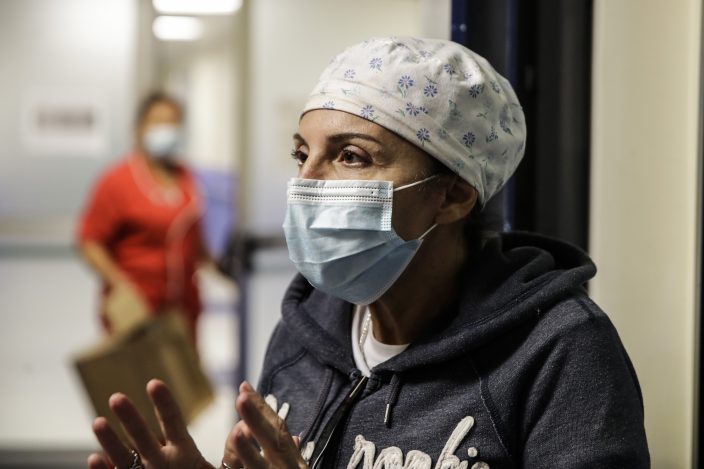 “I had seven or eight days of vacation and I joined my mother in Riccione (on the Adriatic Sea), and I was an alien. I was seeing everyone without masks, this beach full of people. Crowds in the bars. And the only ones with masks were the Lombards, and the others, all without.

“I told them all off. It was as if I was in a frenzy. I would say, ‘Move apart and put on the masks.’ I was extremely worried. I would watch and think about October, and I would say to my mother and daughter, ‘With the free-for-all that is happening, we will be facing disaster.’ Everyone told me I was an alarmist, even friends. I told them: ‘I am not an alarmist. I have worked in the infectious diseases ward for 12 years, and the virus will return. Because all viruses return in October. And this one won’t be missing, for sure.’” 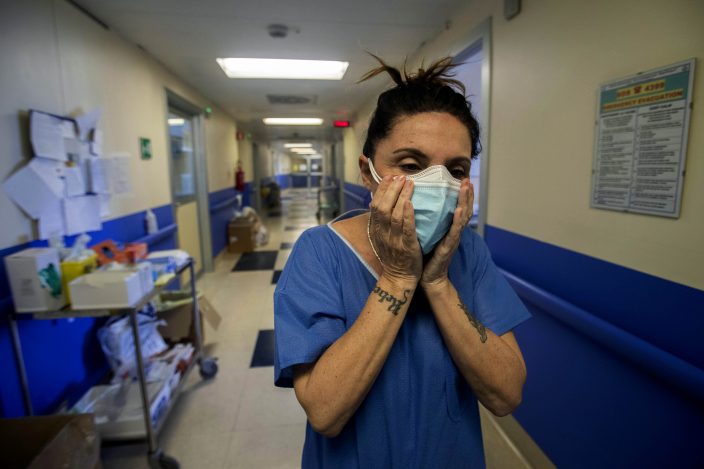 Nurse Cristina Settembrese fixes two masks to her face during her work shift in the COVID-19 ward at the San Paolo hospital in Milan, Italy, Friday, April 10, 2020. (AP PhotoLuca Bruno)

FLASHBACKS FROM A PANDEMIC

“This young man still pulls at my heart. It is a terrible, terrible story. He was a 42-year-old guy. When he arrived, he was in pretty good shape, then we had to intubate him, with the anesthesiologist. I held his hands, and he said, ‘Cristina, swear to me that I will wake up, because I have two small children.’ And to help him go to sleep calmly, I promised him. It is a promise I could not keep, because after four or five days, the patient died. I was a mess. I am still carrying this.

“Often, when I go into a room, I see the people who were there before. All the beds have faces. They have faces that I remember. Sometimes I have nightmares, I am not ashamed to say. I am having flashbacks that are heavy psychologically.... I still cannot go to sleep in a bed because I associate it with illness, something I never felt in 35 years working as a nurse. Slowly, I will get over it. But I have been sleeping on the sofa since March. I cannot get in a bed.“

“The other day I was destroyed, as if I had spent the whole day doing backbreaking work in the fields. When I couldn’t smell or taste anything, I went and got tested. Damn! I can say I am positive, but I don’t have major symptoms. I don’t have a fever, just some coughing and aches everywhere, like a terrible, terrible flu.

"In the end, the virus doesn’t hate me. My defenses were down. I worked too many hours, always wearing a mask and maintaining a distance. I have no idea where I got it. Now my daughter, who came here a few times to eat between shifts, has a fever, with a headache. She had a test yesterday. I am very worried, and feel very guilty.”