When a contact tracer called the Iraqi woman to say her 18-year-old daughter tested positive for the coronavirus and could quarantine for free in a hotel, the woman panicked — recalling the family's terror of risking separation forever during their flight from Baghdad after a bomb killed her brother.

The contact tracer, Iraqi immigrant Ethar Kakoz, had made a similar harrowing journey using smugglers to get out of Iraq after her parents were told she could be kidnapped. So Kakoz came up with a safe way for the teen to isolate herself at home in the San Diego suburb of El Cajon, knowing the mother couldn't bear to be away from her daughter.

Kakoz is among a growing legion of ethnically and racially diverse contact tracers hired by local health departments to help immigrants, refugees and minorities protect themselves during a pandemic that has disproportionately affected people of color. One call at a time from Southern California to Tennessee, the contract tracers are trying to build confidence in America's public health system. 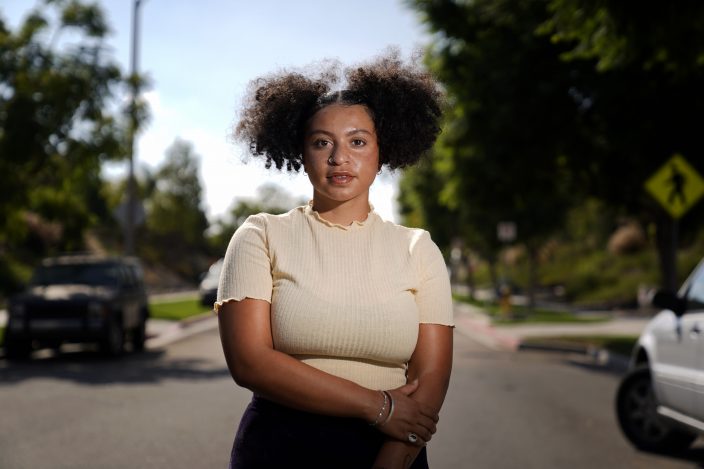 Amira Temple, a contact tracer for the COVID-19 virus, stands for a portrait Thursday, Oct. 22, 2020, in Chula Vista, Calif. Temple sees her job as an extension of her work as a civil rights activist in San Diego's Black and Hispanic communities. "There's a gap within these communities of food, housing and security so COVID is kind of bringing these things to light," she said. (AP PhotoGregory Bull)

They have fluency in a multitude of languages, helping them bridge cultural divides and knock down misinformation about the virus circulating among immigrant, Black and Hispanic communities. The challenges include President Donald Trump downplaying it and his declaration that top government scientists are “idiots.”

Contact tracers like Kakoz who are able to connect with people mark a rare success in a contact tracing effort that has largely been a failure nationwide.

While many rich countries like South Korea use extensive contact tracing to contain the virus and reopen their economies, the U.S. has no national program, and local efforts have struggled to get people to cooperate and keep up with all the cases. 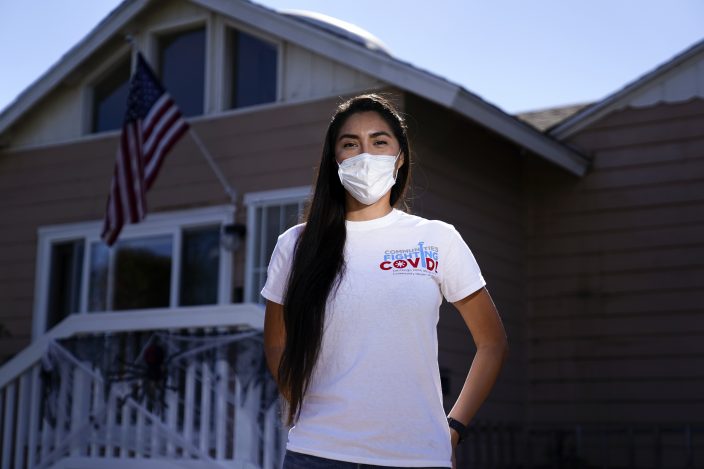 Veronica Pelayo, a contact tracer for the COVID-19 virus, stands for a portrait Thursday, Oct. 22, 2020, in San Diego. A native Spanish speaker and daughter of Mexican immigrants, Pelayo lets each person know that their information is confidential and tries with each call "to make it very personal and be very understanding," she said. The approach is a growing trend to stop the proliferation of misinformation among Black, Hispanic and immigrant populations being ravaged by the coronavirus. (AP PhotoGregory Bull)

Concerns about privacy abound among many Americans, but an inherent distrust of government in communities of color is a compounding factor.

The contact tracers make cold calls from lists provided by local health departments of people who were reportedly within six feet (1.8 meters) of an infected person for more than 15 minutes.

Their goal: Convince them to self-quarantine or take precautions so the virus won't spread. Then some contact tracers act as community health workers by visiting the people to check on them and offering help with paying rent, applications for unemployment benefits and food deliveries. 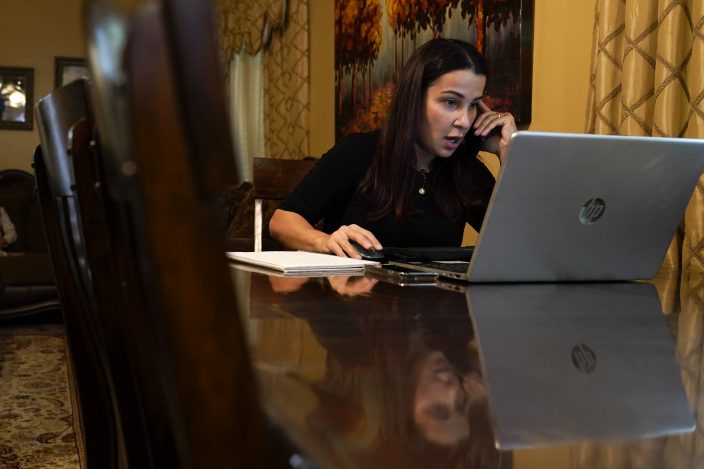 No prior health training is needed for the program Kakoz works for, a partnership between San Diego State University and San Diego County that hired people from the region's Arabic-speaking, Spanish-speaking, Filipino and Black communities.

Elsewhere around the U.S., Nashville has hired contract tracers fluent in Bengali and Nepali, and Ventura County near Los Angeles is recruiting people who speak Mexico's indigenous Mixtec language. 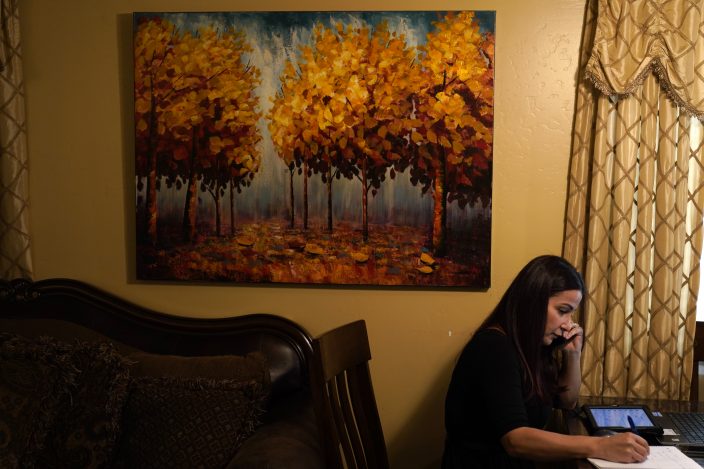 Kakoz lives in El Cajon, a city of about 105,000 east of San Diego, that is a melting pot for refugees, many of them from Arabic-speaking, war-torn countries.

The pandemic, she said, has triggered anxiety many believed they left behind in their home countries after arriving in the U.S.

“For many of these families it’s really bringing them back to the past and the unsafety they felt during the war, the lack of food, not being able to go to stores,” Kakoz said.

That knowledge helped Kakoz in her interview with the Iraqi woman to come up with a safe plan for the family of six living in a three-bedroom apartment with two bathrooms.

The daughter would stay in one bedroom and be the only person using one bathroom and all family members would wear masks at home. She also put them in touch with counselors who treat war trauma.

“I feel empathy," Kakoz said. "My responsibility is to just educate them and tell them about what is the right thing to do.”

On another call with an Iraqi man, she dispelled his belief that the coronavirus had come from a gas being tested by the U.S. military — which had prompted his wife to keep their windows closed after a cousin was infected.

Kakoz had seen something similar on a local Arabic-language Facebook page and persuaded the man and his wife to open their windows, echoing expert advice to avoid virus-laden droplets from circulating in non-ventilated spaces.

Dr. Hala Madanat, a leading public health researcher at San Diego State University who helped design the program, said she learned how vital people like Kakoz can be from Africa’s experience with the Ebola virus outbreak.

The outbreak was worsened by misinformation and mistrust in the government.

But Nigeria, where community health workers who had been working on polio eradication, quickly pivoted to using them as contact tracers for Ebola and was able to squash its outbreak within months.

Amira Temple, another contact tracer, views her job as an extension of her work as a civil rights activist in San Diego’s Black and Hispanic communities.

“There’s a gap within these communities of food, housing and security so COVID is kind of bringing these things to light,” she said.

A single mother told Temple in a call that she and her son were self-quarantining together after being exposed to an infected person but needed food. Temple dropped boxes of nonperishable goods at the mother's door so they would have enough to eat during their two weeks of quarantine.

“I think about her often,” Temple said. “I’m glad we could fill the holes and let these people know at least while they’re sick, the community has their back.”

After being called by a Spanish-speaking contact tracer when a relative in an apartment upstairs from her tested positive, 77-year-old Mexican immigrant Maria Tellez said she was grateful someone was looking out for her.

The contact tracer, Veronica Pelayo, is the daughter of Mexican immigrants. Tellez does not speak English and said she immediately trusted Pelayo.

Pelayo also makes calls to people in the country illegally so she takes care to let everyone she calls know that their information is confidential and attempts in each call “to make it very personal and be very understanding.”

In the call to Tellez, Pelayo stressed the importance of wearing masks. She then followed up by visiting Tellez and the relative during the quarantine period to check on them and make sure they had enough food.

Tellez said the attention “kept our spirits up and made us feel like everything was going to be OK.”

“We no longer felt afraid," she said.

The Associated Press produced this story with support from the Solutions Journalism Network.

Mitch Swepson has been rushed into ...