Many countries, especially in the democratic West, champion freedom of expression and allow publications that lampoon Islam’s prophet. So why is France singled out for protests and calls for boycotts across the Muslim world, and so often the target of deadly violence from the extremist margins?

Its brutal colonial past, staunch secular policies and tough-talking president who is seen as insensitive toward the Muslim faith all play a role.

As France steps up security and mourns three people killed in a knife attack at a church on Thursday – the latest of many attributed to Islamic extremists in recent years -- here’s a look at some of the reasons the country is under fire. 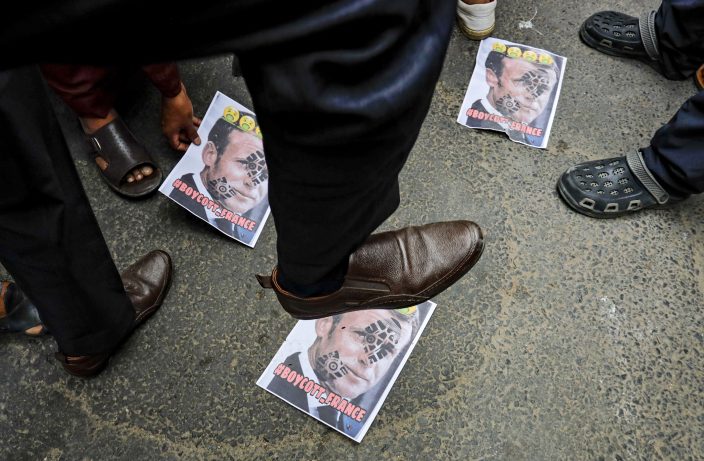 A Muslim activist stamps on posters bearing defaced images of French President Emmanuel Macron during a protest near the French Consulate, in Kolkata, India, Saturday, Oct. 31, 2020. Muslims have been calling for both protests and a boycott of French goods in response to France's stance on caricatures of Islam's most revered prophet. (AP PhotoBikas Das)

France has the largest population of Muslims in Western Europe, more than 5 million in a nation of 67 million, a legacy of its colonial domination of large swaths of Africa and the Middle East.

But the country's efforts to integrate Muslim immigrants have faltered. The official French doctrine of colorblindness is intended to ignore ethnic and religious backgrounds and to have all French citizens seen as equally French. In reality, the ideal often fuels discrimination against those who look, dress or pray differently from the historically Catholic majority, instead of preventing it. 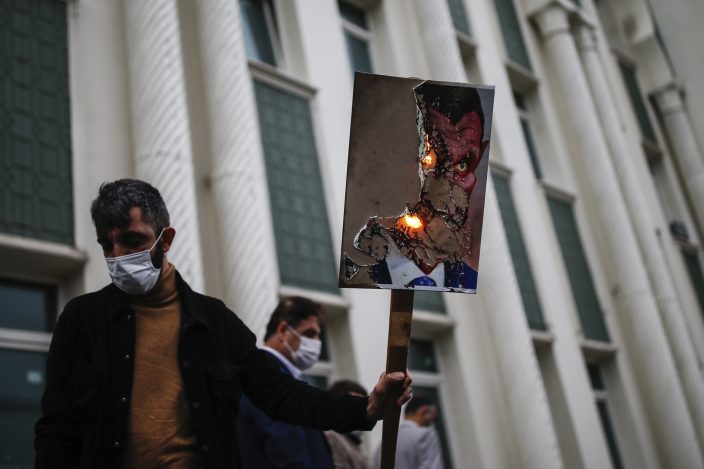 A man holds a poster with a caricature of France's President Emmanuel Macron, depicting him as a devil, which was set on fire, during a protest against France in Istanbul, Friday, Oct. 30, 2020. There is ongoing tension between France and Turkey after Turkish President Recep Tayyip Erdogan said Macron needed mental health treatment and made other comments that the French government described as unacceptably rude. Erdogan questioned his French counterpart's mental condition while criticizing Macron's attitude toward Islam and Muslims. (AP PhotoEmrah Gurel)

Muslims are disproportionately represented in France’s poorest, most alienated neighborhoods, as well as its prisons. That has bred angry outcasts who see their homeland as sinful and disrespectful toward Islamic traditions, or simply racist against Arab and other immigrants from lands that once enriched the French empire.

While recent Islamist extremist attacks in France were carried out by those born abroad, French-born youth were behind much of the worst bloodshed in recent years, many of them linked to the Islamic State group. 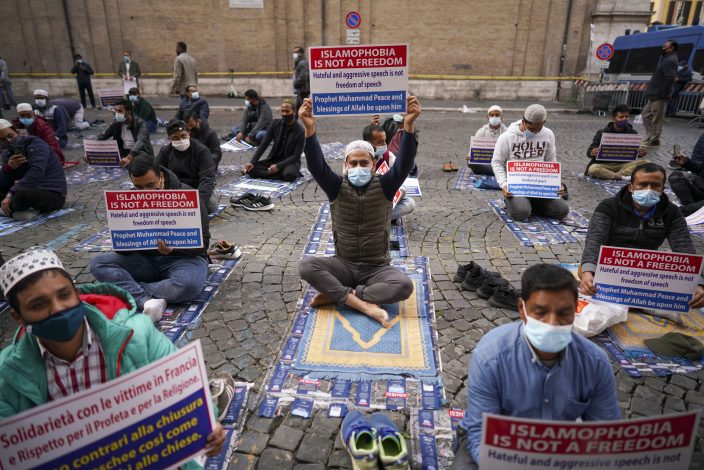 Members of an Italian Muslim association stage a sit-in and prayer to condemn what they see as persecutory acts against the Islamic community in France and against the publication of pictures and what they see as disrespect of the Prophet Muhammad, in Rome, Friday, Oct. 30, 2020. The protesters also condemned the attack in Nice, France. (AP PhotoAndrew Medichini)

France maintains a more hands-on role than Britain does in their former colonies, notably via economic and cultural ties — and that's also visible in how France deploys troops abroad.

French forces intervened in recent years against Islamic extremists in Mali and Syria, both former French holdings. Thousands of French soldiers are now stationed in former colonies in the Sahel region of Africa with the same mission.

A French military presence fuels routine online appeals from IS, Al-Qaida and other extremists for retaliation on French soil, in hopes of forcing France to withdraw its forces. 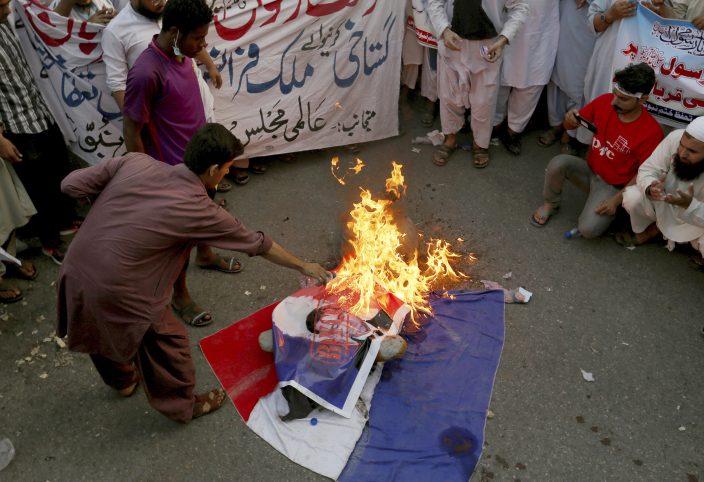 Supporters of a religious group burn defaced images of French President Emmanuel Macron with a representation of a French flag during a protest against the French president and republishing of caricatures of the Prophet Muhammad they deem blasphemous, in Karachi, Pakistan, Saturday, Oct. 31, 2020. Muslims have been calling for both protests and a boycott of French goods in response to France's stance on caricatures of Islam's most revered prophet. (AP PhotoFareed Khan)

Much of the current anger stems from the recent republication by French satirical newspaper weekly Charlie Hebdo of caricatures depicting the Prophet Muhammad. The cartoon images of Islam's founder deeply offended many Muslims, who see them as sacrilegious. But the cartoons were originally published in Denmark in 2005, and similar images have been published in other countries that hold freedom of expression dear.

While French officials often say their country is targeted because of its reputation as the cradle of human rights and a rampart of global democracy, what distinguishes France most is its unusual attachment to secularism.

The often-misunderstood concept of French secularism is inscribed in the country's constitution. It was born in a 1905 law separating church and state that was meant to allow the peaceful coexistence of all religions under a neutral state, instead of a government answering to powerful Roman Catholic clerics. Crucifixes were at one point torn from classroom walls in France amid painful public debate.

A century later, polls suggest France is among the least-religious countries in the world, with a minority attending services regularly. Secularism is broadly supported by those on both left and right.

As the number of Muslim in France grew, the state imposed secular rules on their practices. A 2004 banning Muslim headscarves and other ostentatious religious symbols in schools remains divisive, if not shocking to many outside France. A 2011 law banning face veils made Muslims feel stigmatized anew.

France has been hit with extremist attacks over recent decades under leaders across the political spectrum, but centrist President Emmanuel Macron is a particularly popular target. Protesters burned his portrait or stomped on it at protests in multiple countries this week.

That's in part because of a law Macron plans to introduce to crack down on Islamist fundamentalists he contends are turning some communities against the state and threatening pillars of French society, including schools. In the wake of recent extremist attacks, his government expelled Muslims accused of preaching intolerance and shut down groups seen as undermining French laws or norms.

The words the president uses have provoked outrage as well. He said the planned law was aimed at Islamist “separatism," which raised fears of the further alienation of French Muslims.

At a memorial for a teacher beheaded for showing the prophet caricatures to his class, Macron gave a speech extolling tolerance, knowledge and religious freedom. But he drew ire, including from Turkey's president, for saying, “We won’t renounce the caricatures" and that France should “diminish Islamists.”

Earlier, Macron described Islam as a “a religion that is in crisis all over the world," with positions “hardening” in many Muslim countries.

And as calls for anti-French protests mounted, he tweeted: “We will not give in, ever."