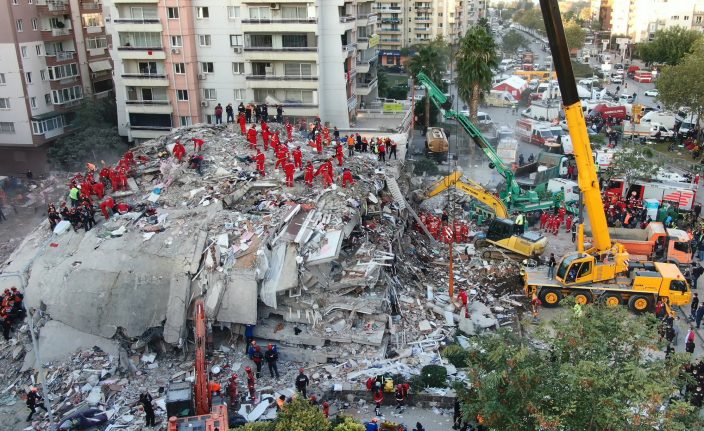 In this photo taken with a drone members of rescue services search for survivors in the debris of collapsed buildings in Izmir, Turkey, early Saturday, Oct. 31, 2020. Rescue teams on Saturday ploughed through concrete blocs and debris of eight collapsed buildings in Turkey's third largest city in search of survivors of a powerful earthquake that struck Turkey's Aegean coast and north of the Greek island of Samos, killing dozens. Hundreds of others were injured. (Ali AksoyerDHA via AP)

VENEZUELA-JAILED-AMERICAN — The family of a Tennessee man held in a Venezuelan prison on charges of terrorism is speaking out for the first time. Matthew Heath was arrested almost two months ago at a roadblock in Venezuela. Authorities said the former U.S. Marine was transporting a grenade launcher and bag of dollars. His family has denied any wrongdoing. But Heath’s family is at a loss to explain many of his movements. SENT: 2,300 words, photos, 1,180-word abridged version. 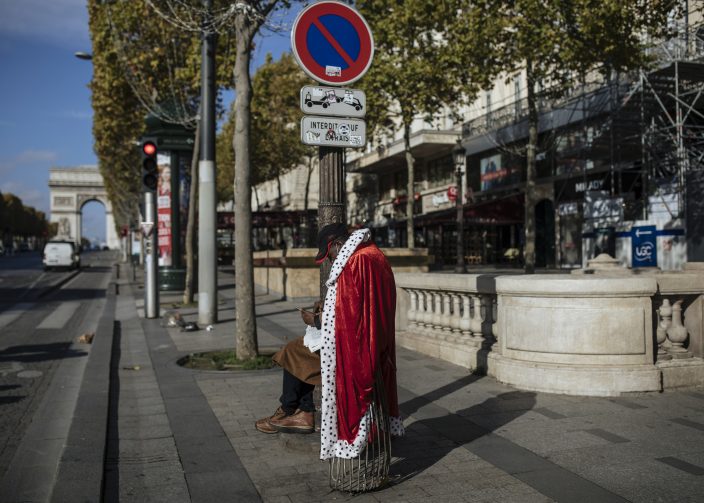 A masked man wearing a robe on the Champs Elysees avenue in Paris, Saturday, Oct. 31, 2020. France re-imposed a monthlong nationwide lockdown Friday aimed at slowing the spread of the virus, closing all non-essential business and forbidding people from going beyond one kilometer from their homes except to go to school or a few other essential reasons. (AP PhotoLewis Joly)

ELECTION 2020 — With help from his old boss Barack Obama, Joe Biden is focusing on Black voters in Michigan as the Democrat looks to head off a repeat of 2016 nominee Hillary Clinton’s epic collapse in the state. Winning Michigan and its 16 electoral votes is crucial to Biden’s strategy to win the White House. Polls have consistently shown the former vice president ahead of President Donald Trump in the state. By Steve Peoples, Zeke Miller and Alexandra Jaffe. SENT: 980 words, photos. Developing with campaign events into the evening EDT.

ELECTION 2020-THE RACE — After a year of deep disruption, America is poised for a presidential election that renders a verdict on the nation’s role in the world and the direction of its economy, on its willingness to contain an escalating pandemic and its ability to confront systemic racial inequity. But the two men on the ballot, President Donald Trump and Democrat Joe Biden, offer more than just differing solutions for the country’s most pressing problems. The choice before voters is a referendum on the role of the presidency itself and a test of the sturdiness of democracy. By Washington Bureau Chief Julie Pace. SENT: 1,210 words, photos.

ELECTION 2020-MEDIA CALLS — The Associated Press says it plans to peel back the curtain and let people know how its experts declare winners and losers on election night. In so doing, the AP is joining with television networks, which also say they plan to be more transparent with viewers and show how conclusions are drawn. By Media Writer David Bauder. SENT: 930 words, photos.

ELECTION 2020-ROAD TO 270 — President Donald Trump and Democratic challenger Joe Biden each has a path to the 270 Electoral College votes needed to win the White House. Biden’s is appreciably wider. The former vice president is competitive in all the battleground states Trump carried in 2016 and has put a handful of traditional Republican states, including Georgia and Arizona, in play. That has Trump scrambling to defend a wide swath of territory and putting the incumbent’s hopes for reelection on two of the most populous swing states, Florida and Pennsylvania. A look at the most likely roads to victory. By Thomas Beaumont and Aamer Madhani. SENT: 1,180 words, photos.

VIRUS OUTBREAK-REBUILDING TRUST — Across the U.S., people from immigrant, refugee and Black communities are being hired as contact tracers to bridge the cultural divide in the United States and rebuild public confidence in America’s public health system. SENT: 1,000 words, photos. By Julie Watson. SENT: 1,150 words, photos. This story is the Sunday Spotlight.

BRITAIN-OBIT-SEAN-CONNERY — Sean Connery, the charismatic Scottish actor who rose to international superstardom as the suave secret agent James Bond and then abandoned the role to carve out an Oscar-winning career in other rugged roles, has died. He was 90. SENT: 1,660 words, photos.

FALL BACK — Time for a change to America, on our clocks and watches. SENT: 200 words, photo.

VIRUS OUTBREAK-BRITAIN — British Prime Minister Boris Johnson is set to hold a news conference alongside his top scientific advisers Saturday amid anticipation of him announcing a new national lockdown for England to stem a resurgence of the coronavirus. Scientists warned COVID-19 hospitalizations and deaths in the U.K. could soon surpass the levels seen at the outbreak’s spring peak. SENT: 600 words, photos.

VIRUS OUTBREAK-HOLIDAY HIRING — The pandemic has reshaped the kinds of jobs retailers are recruiting for this holiday. As more shoppers have shifted to online shopping, stores are searching for new roles like those who man the curbside pickup area or concierges who make sure shoppers are abiding by social distancing rules. SENT: 940 words, photos.

TRUMP-ON-THE-ISSUES — Expect to see a lot more of the same in a second Trump administration. There’s no indication of any big policy switch if President Donald Trump gets another four years in office. SENT: 2,360 words, photos, graphics.

BIDEN-ON-THE-ISSUES — Stop and reverse. Restore and expand. Joe Biden is promising to take the country on a very different path from what it has seen over the past four years under President Donald Trump, on issues ranging from the coronavirus and health care to the environment, education and more. SENT: 2,200 words, photos, graphics.

THE VOICES OF 2020 — All over the country, people are talking. The chaos unleashed in 2020 has created space for different voices to speak, for different conversations to be had and for different questions to be asked. And many people are listening, too, in entirely new ways. The multiplicity of voices itself hints at something larger — a version of America that allows for multiple versions of America. SENT: 1,030 words, photos.

RACIAL INJUSTICE-BLM-EVOLUTION — Black Lives Matter has greatly evolved since it was founded seven years ago after the acquittal of Trayvon Martin’s killer. Now, the global movement faces a test of its influence in the high-stakes U.S. election. SENT: 1,490 words, photos.

HEALTH-OVERHAUL-SIGN-UPS — Millions of Americans who have lost health insurance in an economy shaken by the coronavirus can sign up for taxpayer-subsidized coverage starting Sunday. It’s not a new COVID relief program from the government but the return of annual sign-up season under the Affordable Care Act, better known as “Obamacare.” Open enrollment runs through Dec. 15. SENT: 540 words, photos.

ELECTION 2020-STATE-LEGISLATURES — An intense battle is playing out in the November elections for control of state legislative chambers. The stakes are especially high this year because the winners in most states will control the process for drawing new U.S. House and state legislative districts based on the 2020 census. Republicans currently control a majority of state legislatures. But Democrats are targeting several Republican-led states in hopes of gaining a say in the redistricting process. SENT: 1,240 words, photo.

ELECTION 2020-SENATE-ROCKY-MOUNTAINS — Democrats seeking to pick up Senate seats in Montana and Colorado are falling back on a familiar political playbook in the U.S. West: Paint their opponents as a threat to the undeveloped public lands for which the two Rocky Mountain states are known. SENT: 750 words, photos.

ELECTION 2020-NOOSE AT POLL — A replica hangman’s noose on display near voting booths in a southwest Missouri county building has been covered up following complaints from Democrats that it amounted to voter intimidation. SENT: 200 words.

POLICE SHOOTING-WASHINGTON — Tensions boiled over into unrest following a vigil for a Black man shot and killed by law enforcement in a city near Portland, Oregon, in southwestern Washington state. SENT: 740 words, photos.

TURKEY-EARTHQUAKE — Rescue teams plow through concrete blocs and debris of eight collapsed buildings in search of survivors of a powerful earthquake that struck Turkey’s Aegean coast and north of the Greek island of Samos, killing at least 37 people. More than 800 others were injured. SENT: 580 words, photos.

FRANCE-ATTACK — A third suspect is in French custody Saturday in connection with an Islamic extremist knife attack that killed three people in a Nice church, as the distraught family of the suspected Tunisian assailant asked to see video footage of what happened. SENT: 700 words, photos. With: EU-ATTACKS-WHY-FRANCE-AP-EXPLAINS — Why France incites such anger in the Muslim world. SENT: 800 words, photos.

SUDAN-US — Sudan says it has signed an agreement with the U.S. that could effectively stop any future compensation claims being filed against the African country in U.S. courts, following Washington’s decision to remove the country from its list of state sponsors of terrorism. SENT: 500 words, photos.

ISRAEL-JITTERY-MIGRANTS — After Israel and Sudan agreed this month to normalize ties, some 6,000 Sudanese migrants in Israel are again fearing for their fate. SENT: 1,000 words, photos.

ARMENIA-AZERBAIJAN — Armenia’s leader urged Russia to consider providing security assistance to end the fighting over Nagorno-Karabakh, the biggest escalation in the decades-long conflict between his country and Azerbaijan. SENT: 760 words, photos.

TANZANIA-DEMOCRACY IN DOUBT — That Tanzania’s populist President John Magufuli has been declared the overwhelming winner of Wednesday’s election was no surprise. But the ruling party’s victory in almost all parliament seats has shocked even critics who had warned of creeping repression under Magufuli’s first five years in power. SENT: 960 words, photos. With TANZANIA-ELECTION — Tanzania’s opposition demands new election, mass protests (sent).

BELARUS-WHAT-NEXT? — Nearly three months after Belarus’ authoritarian president’s re-election to a sixth term in a vote widely seen as rigged, demonstrators keep swarming the streets of Belarusian cities to demand his resignation in the most massive and sustained wave of protests the ex-Soviet nation has ever seen. SENT: 860 words, photos.

IVORY-COAST-ELECTION — Tens of thousands of security forces deployed across Ivory Coast on Saturday as the leading opposition parties boycotted the country’s presidential election, calling incumbent Alassane Ouattara’s bid for a third term illegal. While there were scattered reports of unrest, voting went forward in the commercial capital of Abidjan despite opposition threats to block polling stations from opening. SENT: 530 words, photos.

GEORGIA-ELECTIONS — Voters in Georgia cast ballots Saturday in a parliamentary election hotly contested between the governing party, founded by a billionaire, and an alliance around the country’s ex-president who has spent years in self-imposed exile facing charges he rejected as political. After the polls closed, both the ex-president and the billionaire quickly claimed victory, setting the stage for more political turmoil in the ex-Soviet nation on the Black Sea. SENT: 500 words, photos.

IRAQ-PROTEST SQUARE — Iraqi security forces have cleared out sit-in tents from the capital’s central square that has been the epicenter of the anti-government protest movement, a year after the eruption of demonstrations against corruption led to months of clashes with authorities across Iraq. SENT: 380 words, photos.

LIVING IN SPACE-20 YEARS — The International Space Station marks a big milestone Monday. That’s the 20th anniversary of the first crew’s arrival, and there has been a steady stream of people living there ever since. During those two decades, 241 people from 19 countries have visited the orbiting outpost, including several tourists who paid their own way. SENT: 1,550 words, photos.

FBC--T25-OHIO ST-PENN ST — No. 3 Ohio State, led by Justin Fields, plays No. 18 Penn State. The Buckeyes are coming off a rout of Nebraska in their opener in which they scored 52 points. The Nittany Lions are smarting after an overtime loss at Indiana. By College Football Writer Ralph D. Russo. UPCOMING: 850 words, photos. Game starts 7:30 p.m.

FBC--PAUL NEWBERRY-LAWRENCE — Trevor Lawrence just wants to play. All he can do for now is watch. The star quarterback of the nation’s top-ranked college football team has joined millions of victims of the coronavirus pandemic, becoming another stark reminder of just how tenuous this season really is. By Paul Newberry. SENT: 900 words, photos.