Barack Obama is hitting President Donald Trump right where he thinks it’ll hurt most: His ego.

Campaigning for Joe Biden on Saturday, the former president painted Trump as insecure and self-absorbed, describing him as a failed president who cares more about himself than the country.

“Trump cares about feeding his ego. Joe cares about keeping you and your family safe,” Obama said in Flint, Michigan. 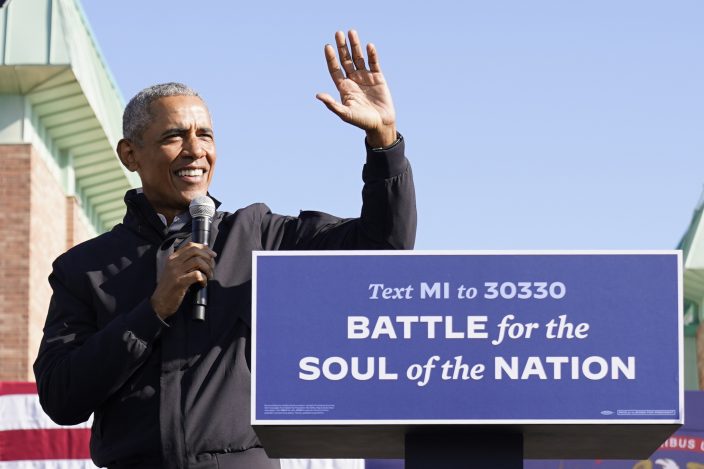 In a scathing speech, Obama mocked and belittled Trump for everything from the president’s criticism of the media coverage of the coronavirus pandemic — Trump, he said, was “jealous of COVID’s media coverage” — to his “obsession with crowd size.”

“He’s still worried about his inauguration crowd being smaller than mine. It really bugs him. He’s still talking about that. Does he have nothing better to worry about?” Obama said. “Did no one come to his birthday party as a kid? Was he traumatized?”

After delivering a sober indictment of Trump’s presidency and warning that America’s democracy is at stake this election at the Democratic National Convention, Obama has taken on a more lighthearted approach since returning to the campaign trail earlier this month for Biden. The personal attacks on Trump have been a centerpiece of Obama's campaign pitch, and he seems to relish the opportunity to needle his successor. On Saturday, Obama at times smiled as he jabbed the president and often sounded incredulous at the state of his administration. 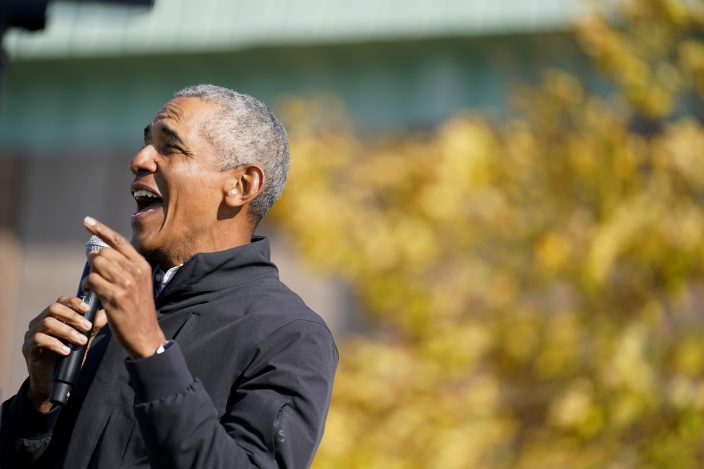 “The president wants to get credit for the economy he inherited and zero blame for the pandemic he ignored,” Obama said.

Obama also dinged Trump on his masculinity. Without mentioning the president directly, Obama said that “kindness, humility, responsibility, helping somebody else out” used to be “the definition of manliness.”

“Not strutting and showing off. Acting important and bullying people,” Obama said. “It used to be being a man meant taking care of other people. Not going around bragging.”

It's a theme Biden echoed in his own speech, saying that Trump is “not strong, weak,” in reference to the moment when U.N. delegates laughed at the president.

Obama himself has been pushing the personal attacks on Trump all week. Earlier this week in Florida he joked that “Florida Man wouldn’t even do” some of the things Trump has done, a reference to a comical meme highlighting news coverage of the oddball and often reckless conduct that seems to come frequently from Florida residents. In Philadelphia earlier this month, Obama needled Trump for his Chinese bank account, joking that if he’d done the same while running for reelection “they would’ve called me Beijing Barry.”

Trump, meanwhile, has taken his own jabs at Obama, declaring at a North Carolina rally earlier this month that Obama was “all over the place” campaigning for Hillary Clinton before she lost in 2016 and suggesting Obama wasn't enthusiastic for Biden's candidacy.

The president added: “I think the only one more unhappy than crooked Hillary that night was Barack Hussein Obama.”

Obama steps out as nation confronts confluence of crises