João Félix scored his second brace in a week to star in another win for Atlético Madrid on Saturday, while Real Madrid’s Eden Hazard emerged from his yearlong scoring rut.

Félix struck Atlético’s first two goals in a 3-1 victory at Osasuna, building on his second-half double in a 3-2 comeback win against Salzburg in the Champions League on Tuesday.

The 20-year-old Portugal forward appears to be on the brink of a breakout season for Atlético after an up-and-down first campaign that only offered flashes of the talent that made him a budding star at Benfica. 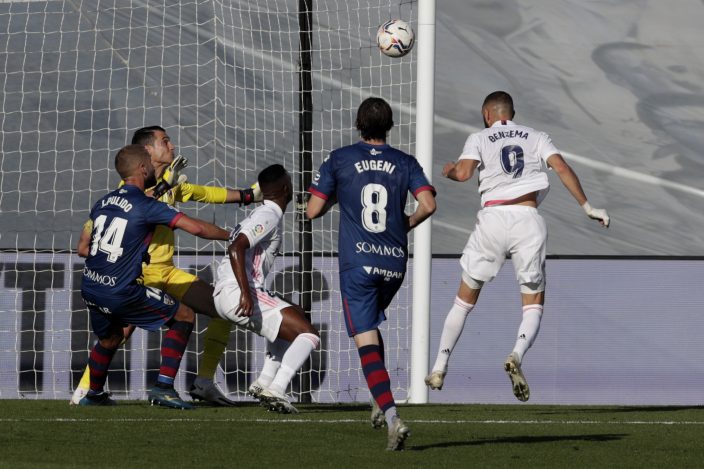 Félix scored nine goals in 36 games in his debut season for Diego Simeone’s Atlético. He has five goals in eight appearances this season.

“It is a good start to the season,” Félix said. “I have worked for this and my teammates are helping me a lot. We are playing very well and need to keep it going.”

Hazard, likewise, gave Madrid fans some hope that his club-record signing from Chelsea last year was not a mistake.

The often-injured Belgian blasted in his first goal since October of last year to spark Madrid’s 4-1 win over Huesca.

Félix led the attack, with Diego Costa injured and Luis Suárez out of the squad for some added rest for the veteran striker.

Félix put Atlético ahead in the 43rd by converting a penalty earned by Víctor “Vitolo” Machin. He missed a chance to add to the lead when he fired a second penalty off the upright shortly after halftime.

But he made up for the miss in the 69th with a powerful strike after being set up by Ángel Correa.

Ante Budimir nodded in a goal for Osasuna before Lucas Torreira claimed his first goal for Atlético since joining on loan from Arsenal this offseason.

In his first start of the season, Hazard rifled in a long-range strike to set Madrid on its way to ending a two-game home losing streak.

Ravaged by a series of injuries, including a foot fracture, Hazard has struggled since making his club-record 100 million euros (then $113 million) move from Chelsea in 2019. His only previous goal for Zinedine Zidane’s side was on Oct. 5, 2019.

The Belgium forward broke his scoring drought in the 40th minute when he received the ball, spun to fend off a defender, and unleashed a left-footed shot from outside the area that swerved into the corner of the net.

“I’m happy for the team and for myself,” Hazard said. “When you score you get extra confidence. I’m tired, I want to play more games. My peak fitness will come with the matches."

Karim Benzema scored two more for Madrid and set up Federico Valverde for another.

Julen Lopetegui’s Sevilla has lost three straight in the league after falling 2-1 at Athletic Bilbao.

Youssef En-Nesyri opened the scoring for Sevilla with a deflected shot in the ninth minute.

But Iker Muniain leveled in the 76th and substitute Oihan Sancet volleyed in a cross from Iñaki Williams to compete the fightback with four minutes remaining.