The Pittsburgh Steelers rallied behind Ben Roethlisberger to remain the lone unbeaten team in the NFL, beating error-prone Lamar Jackson and the Baltimore Ravens 28-24 Sunday in a duel for first place in the AFC North.

Roethlisberger threw a pair of second-half touchdown passes to bring Pittsburgh (7-0) back from a 10-point halftime deficit. After completing only four passes for 24 yards in the first half, the 38-year-old finished 21 for 32 for 182 yards.

Jackson threw two interceptions and lost two fumbles, turnovers that helped Pittsburgh stay within striking distance until its offense finally got on track. 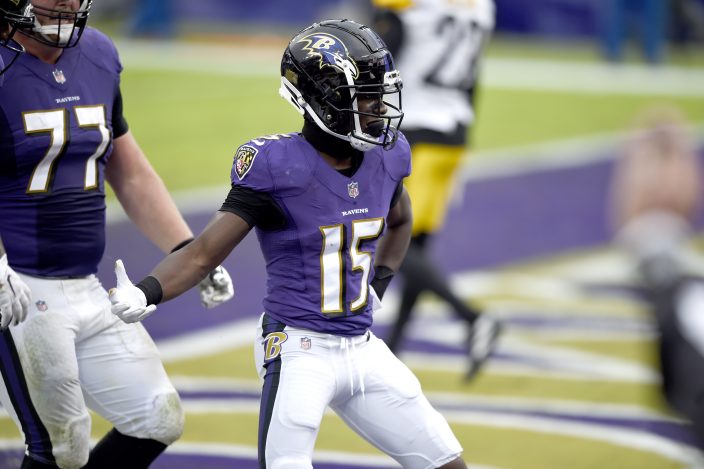 Baltimore Ravens wide receiver Marquise Brown reacts after catching a touchdown pass from quarterback Lamar Jackson, not visible, during the second half of an NFL football game against the Pittsburgh Steelers, Sunday, Nov. 1, 2020, in Baltimore. (AP PhotoGail Burton)

The Steelers led 28-24 when the Ravens (5-2) faced a fourth-and-3 at the Pittsburgh 8 with 2 minutes left. Jackson ran a quarterback draw and lost the ball while being stopped short.

Baltimore got the ball back and moved to the Pittsburgh 23 before Jackson’s pass in the end zone was broken up on the final play.

Earlier, Robert Spillane took an interception back for a score to end Baltimore’s first possession; Jackson lost a fumble inside the Pittsburgh 5; and Alex Hightower set up a Steelers touchdown by picking off a pass on Baltimore’s initial offensive play of the second half.

The Steelers stretched their streak of games with at least one sack to 64, and Baltimore’s run of games with a takeaway reached 20 when Peters forced a fumble by Claypool in the first quarter.

ORCHARD PARK, N.Y. (AP ) — Backup defensive lineman Justin Zimmer punched the ball out of Cam Newton’s arms and the fumble was recovered by safety Dean Marlowe at the Buffalo 13 with 31 seconds remaining to secure the win.

Zack Moss scored two touchdowns rushing and the AFC East-leading Bills are off to consecutive 6-2 starts for the first time since a six-year run from 1988 to 1993. Buffalo snapped a seven-game skid against the division-rival Patriots, and beat a Bill Belichick-coaches New England team for just the sixth time in 41 meetings, going back to 2000.

New England dropped to 2-5 and has lost four in a row, matching its worst skid since 2002.

The game was decided just as the Patriots were threatening to at least force overtime. Facing second-and-10 at the Buffalo 19, Newton took the snap and followed a line of blockers to his left. Zimmer came diving in from behind and punched out the ball, which rolled directly into Marlowe’s arms.

MIAMI GARDENS, Fla. (AP ) — Tua Tagovailoa threw his first career touchdown pass and then let his teammates take over with a succession of big plays.

The Dolphins stamped themselves as playoff contenders by earning their third consecutive win. They struck for scores 75 seconds apart on Andrew Van Ginkel’s 78-yard fumble return and Jakeem Grant’s team-record 88-yard punt return. They came up with four takeaways in the first half and at halftime led 28-10 despite being outgained 224-54.

The big plays helped Tagovailoa overcome a costly early turnover in his first NFL start. The No. 5 overall pick in this year’s draft finished 12 of 22 for 93 yards.

The Rams (5-3) ran 92 plays to the Dolphins’ 48, and Miami won while totaling eight first downs and 145 yards. The Dolphins (4-3) have outscored opponents by a combined 95-34 in the past three games, and they’re above .500 for the first time in their 23 games under second-year coach Brian Flores.

Dalvin Cook gained 226 yards from scrimmage and became the first Viking in over four decades to score four touchdowns in a single game.

The Vikings withstood a three-touchdown performance from receiver Davante Adams, who had seven catches for 53 yards.

Green Bay had the ball at Minnesota’s 41-yard line with 12 seconds and no timeouts left, but D.J. Wonnum sacked Aaron Rodgers and knocked the ball loose. Eric Wilson recovered at the 24 as time expired.

Cook missed Minnesota’s last game with a groin injury that had him listed as questionable, but he looked just fine while dicing up Green Bay’s defense all day. Each of the Vikings’ first four possessions ended with Cook touchdowns. He ran for 163 yards and three touchdowns on 30 carries. Cook also had two catches for 63 yards, including a 50-yard score.

The only other Vikings to score four touchdowns in a game are Ahmad Rashad in 1979 and Chuck Foreman in 1975.

In what could be the longest of le ...