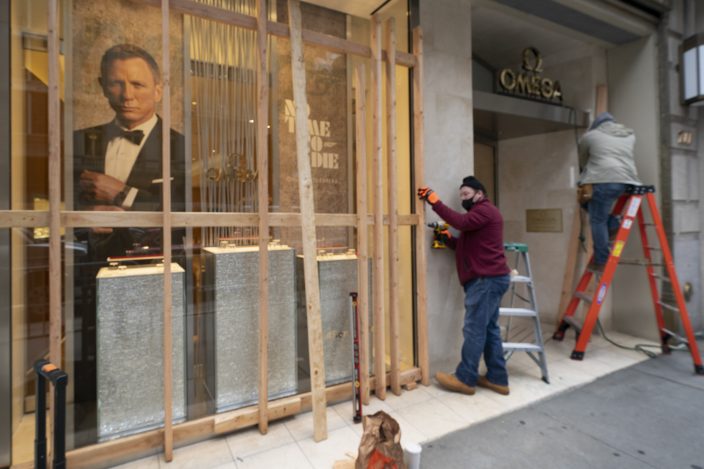 Workers board up an Omega store, Monday, Nov. 2, 2020 in New York ahead of Tuesday's contentious presidential election. The moves come as retailers are trying to protect themselves against possible civil unrest in a year that has seen widespread protests over social justice that sometimes became violent. (AP PhotoMark Lennihan)

ELECTION 2020 — President Donald Trump cast doubt on the electoral process and openly ponders the prospect of losing a critical battleground state while his Democratic challenger, Joe Biden, stays on offense during the final full day of campaigning ahead of an election that could have consequences for the U.S. for years to come. By Jonathan Lemire, Zeke Miller, Will Weissert and Alexandra Jaffe. SENT: 1050 words. UPCOMING: 1090 words by 5 p.m., photos, video, with updates into the night from Trump, Biden events. With ELECTION 2020-THE LATEST, developing. 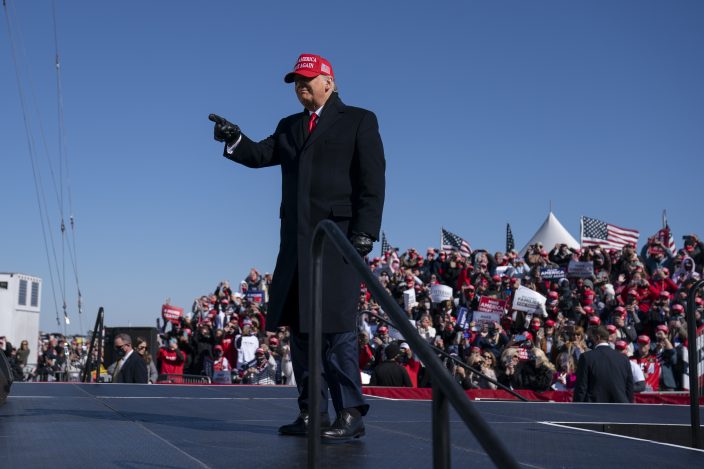 ELECTION 2020-KEY QUESTIONS — Key questions linger as the final votes are cast and counted. What do Americans want from a president? Whose turnout approach will win? Will voting be peaceful? Is 2020 more like 1968 or 1980? By Bill Barrow. SENT: 1149 words, photo.

ELECTION 2020-KENOSHA — Two months after street violence shook the little lakeside city of Kenosha, Wisconsin, dozens of businesses are still boarded up but far more have taken down their plywood. The music store is selling ukuleles again. The neighborhood taverns are open, and people are walking along the waterfront. But with a divisive election a day away, it’s no surprise some businesses are hedging their bets. They are covering up windows and sometimes building outer sets of plywood doors that can be easily pulled shut if trouble returns. By Tim Sullivan. SENT: 970 words, photos. 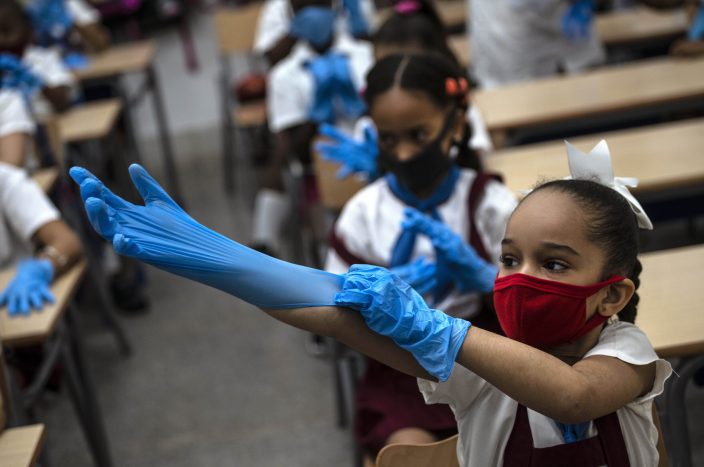 A mask-wearing student puts on plastic gloves as a precaution amid the spread of the new coronavirus during class in Havana, Cuba, Monday, Nov. 2, 2020. Tens of thousands of school children returned to class Monday in Havana for the first time since the coronavirus pandemic prompted authorities to shut the island down in April. (AP PhotoRamon Espinosa)

AFGHANISTAN — Islamic State militants in Afghanistan stormed the Kabul University on Monday as it hosted a book fair attended by the Iranian ambassador, sparking an hours-long gun battle and leaving at least 22 dead and 22 wounded at the war-torn country’s largest school. By Rahim Faiez and Kathy Gannon. SENT: 950 words, photos. 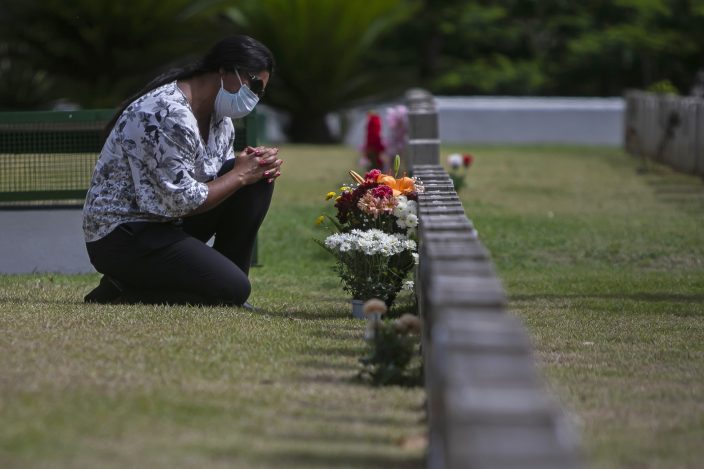 Vera Lucia Neia prays at the grave of her mother Maria Auxiliadora, 76, who she said died of COVID-19, on Day of the Dead at the Penitencia cemetery in Rio de Janeiro, Brazil, Monday, Nov. 2, 2020. Brazil has confirmed more than 160,000 deaths from the virus, the second-highest in the world, behind only the U.S. (AP PhotoBruna Prado) 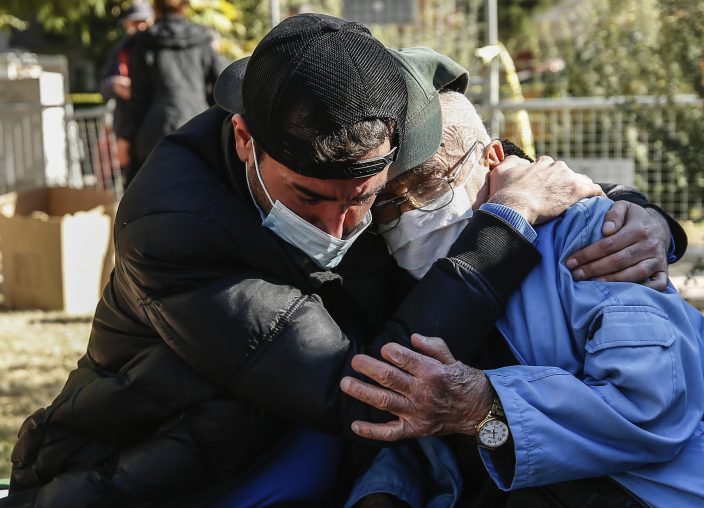 Local residents comfort each other as they watch members of rescue services working on the search for survivors in the debris of a collapsed building, in Izmir, Turkey, Monday, Nov. 2, 2020. Rescue teams continue ploughing through concrete blocs and debris of collapsed buildings in Turkey's third largest city in search of survivors of a powerful earthquake that struck Turkey's Aegean coast and north of the Greek island of Samos, Friday Oct. 30, killing dozens. Close to a thousand people were injured.(AP PhotoEmrah Gurel)

TEXAS SHOOTING-ACTOR KILLED — Police in Texas say the actor Eddie Hassell has died in a shooting. The 30-year-old was known for his roles in the NBC show “Surface” and the 2010 film “The Kids Are All Right.” SENT: 130 words, photos.

BIDEN-VIDEO-MISINFORMATION — It’s an awkward moment when a presidential candidate greets the audience at a rally and names the wrong state. Fortunately for Democratic nominee Joe Biden, that didn’t happen to him this week. SENT: 460 words, photo. 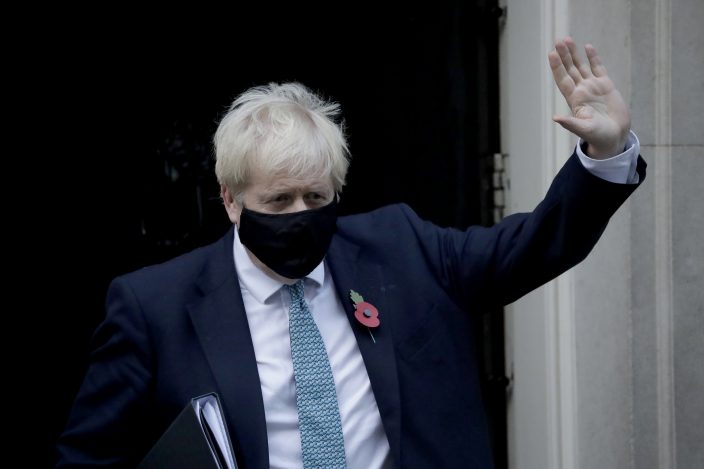 British Prime Minister Boris Johnson waves at the media as he leaves 10 Downing Street in London, to go to the Houses of Parliament to deliver a statement on England's upcoming coronavirus lockdown, Monday, Nov. 2, 2020. Johnson on Saturday announced a new month-long lockdown for England that will start on Thursday, after being warned that without tough action a resurgent coronavirus outbreak will overwhelm hospitals in weeks. (AP PhotoMatt Dunham)

VIRUS-OUTBREAK-EUROPE — Germany became the latest European country to embark on a partial shutdown as authorities across the continent scramble to flatten a rapid rise in coronavirus infections that threatens to overwhelm their health care systems. In parts of Europe, the new restrictions — which vary in strictness — are prompting sometimes violent protests by people frustrated at once again having to forgo freedoms. SENT: 800 words, photos. 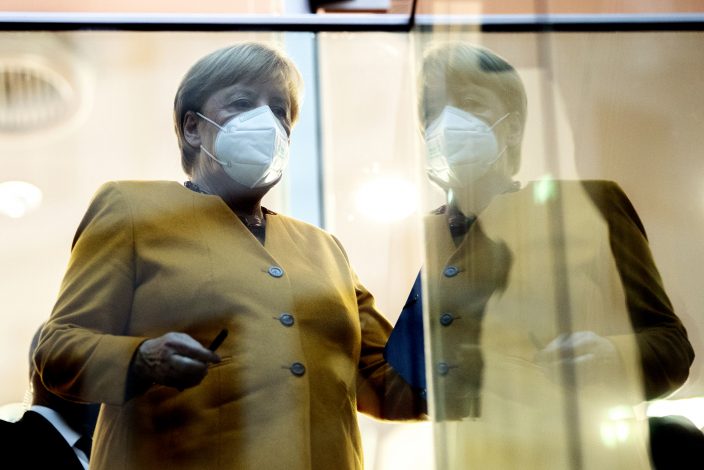 VIRUS OUTBREAK-ONE GOOD THING-KID COSTUMES — Logan Houghtelling worried about his father, a firefighter who was battling the wildfires in California. He also felt bummed out about being away from his friends during the coronavirus pandemic. So he began to dress up in costumes to cheer up his classmates, his family and many others who now wonder what he’ll wear next during his classes on Zoom. SENT: 500 words, photos.

VIRUS OUTBREAK-DAY CARE RULES — As more families make the jump back to group day care this fall in an attempt to restart lives and careers, many parents, pediatricians and care operators are finding that new, pandemic-driven rules offer a much-needed layer of safety but also seem incompatible with the germy reality of childhood. SENT: 1,000 words, photos. 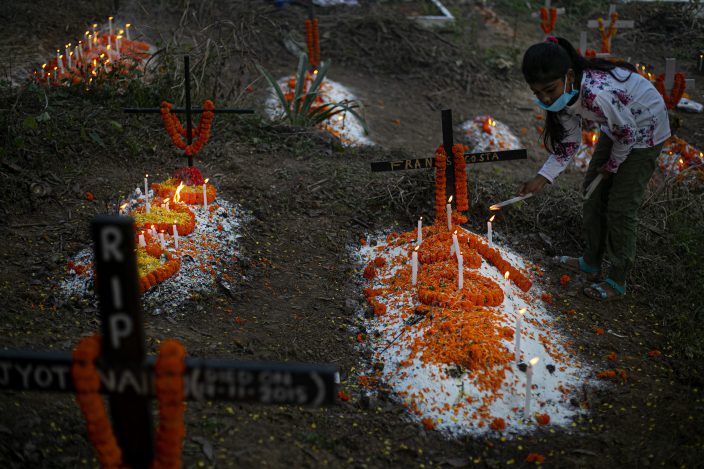 A girl wearing a face mask as a precaution against the coronavirus lights candle as she prays at the grave of a deceased relative during All Souls Day in Gauhati, India, Monday, Nov. 2, 2020. (AP PhotoAnupam Nath)

VIRUS OUTBREAK-LOW UNEMPLOYMENT — Five of the six states with the nation’s lowest unemployment rates are in the Midwest, have Republican governors and have almost no restrictions intended to slow the spread of the coronavirus. Those governors have said their lack of mask mandates or other restrictions are a big reason why their states are riding out the pandemic relatively well, but economists say it’s not so simple. SENT: 1,080 words, photos.

VIRUS OUTBREAK-POLAND-BUYING-FLOWERS — Driven by new solidarity, Poles have been buying armloads of chrysanthemums to help out flower vendors who unexpectedly faced bankruptcy when the government ordered all cemeteries locked due to COVID-19 during a traditional memorial weekend. SENT: 360 words, photos.

ELECTION 2020-TRUMP-LEGAL CHALLENGES — President Donald Trump and his reelection campaign are signaling they will pursue an aggressive legal strategy to try to prevent Pennsylvania from counting mailed ballots that are received in the three days after the election. The matter could find its way to the Supreme Court, especially if those ballots could tip the outcome in the battleground state. By Mark Sherman. SENT: 570 words. UPCOMING: 800 words by 4 p.m., photos.

ELECTION 2020-MAINE-RANKED-VOTING — Voters will for the first time in U.S. history use ranked choice voting to determine their pick Massachusetts voters are considering statewide votes to adopt the voting method. Maine’s use of ranked voting comes as Alaska and Massachusetts voters consider statewide votes to adopt the method. SENT: 500 words, photos.

EXPLAINING THE ELECTION 2020-THE-WORDS-OF-POLITCS — ‘So 2020’ is a new phrase that made its way into America’s political lexicon this year. It has come to describe all things unexpected, unsettling and unprecedented. Then there are two new terms, that are, themselves, “so 2020.” They are “cancel culture,” a term that has come to signify intolerance to free speech, and QAnon, a right-wing, pro-Trump conspiracy theory. SENT: 560 words, photos.

SUPREME COURT-BARRETT-FIRST DAY — She didn’t have to wear a black robe or even be in Washington, but Justice Amy Coney Barrett joined her new colleagues at the Supreme Court on Monday to hear arguments for the first time. Because of the coronavirus pandemic, the high court began hearing cases by phone in May. That meant the public didn’t see the new justice, but at the beginning of the day’s arguments Chief Justice John Roberts welcomed her publicly to her new role with the traditional greeting. He wished her “a long and happy career in our common calling.” SENT: 630 words, photo.

TROPICAL WEATHER —New Hurricane Eta quickly gained force, erupting into a major hurricane as it headed for Central America, threatening massive flooding and landslides across a vulnerable region. Eta had maximum sustained winds of 120 mph (195 kph) and was located about 85 miles (135 kilometers) east of the Nicaragua-Honduras border, according to the National Hurricane Center. It was moving west at 9 mph (15 kph). SENT: 830 words, photo.

ETHIOPIA-MASSACRE — Amnesty International says survivors of a massacre by rebels in western Ethiopia on Sunday counted 54 bodies in a schoolyard, the latest attack in which members of ethnic minorities have been deliberately targeted. Human rights groups are asking why federal soldiers left the area just hours before attackers moved in. Ethiopia’s government has blamed a rebel group, the Oromo Liberation Army. SENT: 680 words.

TURKEY-EARTHQUAKE — Rescuers have pulled two children from the rubble of a deadly earthquake in a Turkish coastal city. The quake has left at least 94 people dead in Turkey and Greece. SENT: 540 words, photos.

FRANCE-TEACHER-BEHEADED — French schools held a minute of silence after reopening for the first time since the beheading of a teacher who opened a class debate on free speech by showing students caricatures of the prophet of Islam. Monday was marked as one of national homage for the teacher, Samuel Paty. SENT: 550 words, photos.

VATICAN-CIVIL UNIONS — The Vatican says Pope Francis’ comments on gay civil unions were taken out of context in a documentary that spliced together parts of an old interview, but still confirmed Francis’ belief that gay couples should enjoy legal protections. SENT: 890 words, photos.

SOUTH-DAKOTA-ATTORNEY-GENERAL-FATAL-ACCIDENT —Investigators say South Dakota Attorney General Jason Ravnsborg was distracted and drove onto the shoulder where he struck and killed a pedestrian in September. SENT: 380 words.

MISSING-PLANE — Authorities say they have found the wreckage of a small plane from North Carolina that crashed in western New York on Sunday, killing all three people aboard. SENT: 170 words.

FINANCIAL MARKETS —Stocks are opening broadly higher on Wall Street as the market climbs back from its worst week since March. The S&P 500 rose 1.1% in the first few minutes of trading, following gains in overseas markets. SENT: 650 words, photos. UPCOMING: Will be updated through market close, about 800 words by 5 p.m.

BRITAIN-DEPP — A British court has ruled against Johnny Depp in his libel case against the owner of the Sun tabloid newspaper, which labelled him a “wife beater.” In a ruling, Justice Andrew Nicol said Depp has “not succeeded in his action for libel.” SENT: 620 words, photos.

FOOD-THE RISE — If anyone asks chef Marcus Samuelsson what African food taste like, he has a ready answer: Have you ever had barbeque? Rice? Collard greens? Okra? Coffee? All of them come from Africa. “Everyone has had African American dishes, whether they know it or not,” he says. Samuelsson is hoping to educate Americans and champion Black chefs in “The Rise: Black Cooks and the Soul of American Food.” SENT: 640 words, photos.

OLY--TOKYO-Q&A -- The postponed Tokyo Olympics are to open in just under nine months. But there are still more questions than answers. The IOC and local organizers are working on contingency plans to hold the games during a pandemic. By Stephen Wade. SENT: 900 words, photos.

FBC--ELECTION DAY-COLLEGE FOOTBALL — College athletes, after a summer of activism, won the right to be off from their sports on Election Day. The NCAA mandate might prove more symbolic than practical, especially for football teams that re-arranged practice schedules. By College Football Writer Ralph D. Russo. UPCOMING: 700 words, photos by 6 p.m. EST.