Just when it looked as though John Elway’s latest quarterback undertaking was about to join the long list of flameouts in Denver, Drew Lock suddenly looked like, well, John Elway.

The new comeback kid rallied the Broncos (3-4) from a three-touchdown, third-quarter deficit to beat the Los Angeles Chargers 31-30 Sunday after sputtering most of the afternoon.

Actually, Lock had sputtered pretty much all season after his five-game cameo last December convinced Elway and the Broncos faithful they’d finally found their franchise QB. 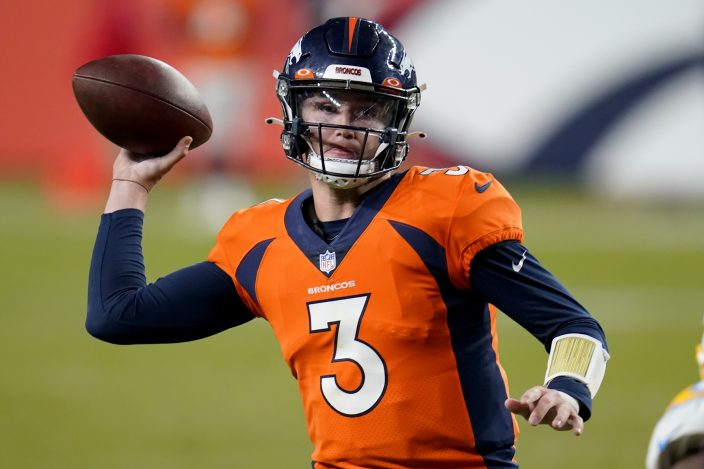 Denver trailed 24-3 and the 5,700 masked and socially distanced fans at Empower Field sounded more like 76,000 boo-birds when the Broncos got the ball with 7½ minutes left in the third quarter.

Although D-tackle Shelby Harris would tweet, “Where the real broncos fans at” after the game, who could blame those in attendance for voicing their frustrations with Denver’s wheezing offense?

Up to that point, Lock had led 45 drives for Denver this season and thrown just one touchdown pass, on the second possession of the opener. The Broncos had also turned the ball over 11 times and punted 17 times, including a dozen after going three-and-out. 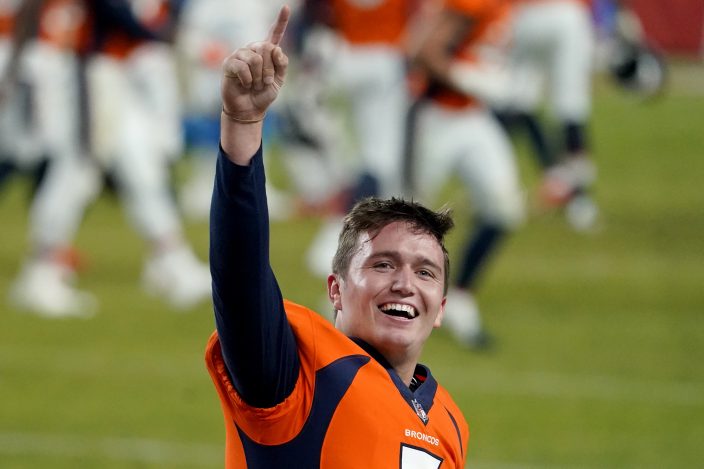 In their first eight possessions Sunday, the Broncos had six punts, a field goal and a kneel down just before trudging up the tunnel after managing a measly 60 yards of offense in the first half.

Coach Vic Fangio bristled Monday, however, when asked on a Zoom call if he ever considered benching Lock.

“No, it was never a consideration,” Fangio said. “The thought never did cross my mind.”

Lock rewarded his coach’s faith by driving Denver on four touchdown drives in his final five possessions, including TD throws to DaeSean Hamilton and rookies Albert Okwuegbunam and KJ Hamler in the final 12 minutes.

Fangio said the turning point came when Lock hit Hamilton for 18 yards on third-and-8 two plays before Phillip Lindsay busted free for a 55-yard touchdown run that made it 24-10.

“If we don’t convert that and we punt, the whole tone of this conversation today would probably be different,” Fangio said.

“So, it just takes one play. That was a big, big play. We had a big run there by Phillip and all of a sudden we’re back in the game. We’ve still got a lot of work to do, but there’s some light at the end of the tunnel.”

And for a change, it wasn’t a train bearing down on them.

The Broncos, who have won three of four since a second straight winless September, need to parlay their newfound offensive success into faster starts if they’re going to make a serious run in the AFC West, where they trail the Raiders (4-3) and Chiefs (7-1).

LT Garett Bolles. He reverted to his old ways by getting whistled for holding, an illegal block in the back and a false start. Here’s the red flag about those yellow flags: O-line coach Mike Munchak was out all week for COVID-19 reasons. If the Broncos give Bolles a big contract extension and Munchak leaves anytime in the short term, say for another head coaching opportunity, the big question is whether that would leave the Broncos with the new, and improved Bolles or the old, penalty-prone Bolles, who was whistled 46 times in his first three seasons?

CB A.J. Bouye is in concussion protocol. TE Nick Vannett (foot) and practice squad call-up C Patick Morris (arm) were being evaluated. Fangio still had a bandage on his nose after getting hit on the sideline following Lock’s interception, “which kind of squished down that shield” that he wears in compliance with the league’s mandate on face coverings during the pandemic.

“It’s one of the problems when you have a big nose, it’s a big target,” Fangio said. “It’s doing good. It was bleeding pretty good there, though.”

0 — Discussions between Fangio and Elway about making deals at Tuesday's trade deadline, “which means to me nothing has been talked about serious enough or is imminent enough,” Fangio said.

4 — Catches for a career-best 82 yards for Hamilton.

The Broncos, who hope to get WR Tim Patrick (hamstring) back for their game at Atlanta on Sunday, need better chemistry between Lock and rookie WR Jerry Jeudy. Although Jeudy caught four passes for a season-best 73 yards, they failed to connect on six other throws.