While the Saints haven't posted a dominant, runaway victory this season, coach Sean Payton likes the fact that New Orleans has emerged triumphant from stressful, late-game scenarios in four straight.

“We’re still improving,” Payton said Monday, a day after the Saints took a 26-23 overtime victory in Chicago. “I thought we got better yesterday in a tough environment. But I do think there’s a grit element. And when you’re able to play well in tight games and come out with a win, I think you develop a certain confidence and you’re comfortable playing” in such circumstances.

The Saints' past three victories have come by three points each and the winning streak began with a six-point victory at Detroit. 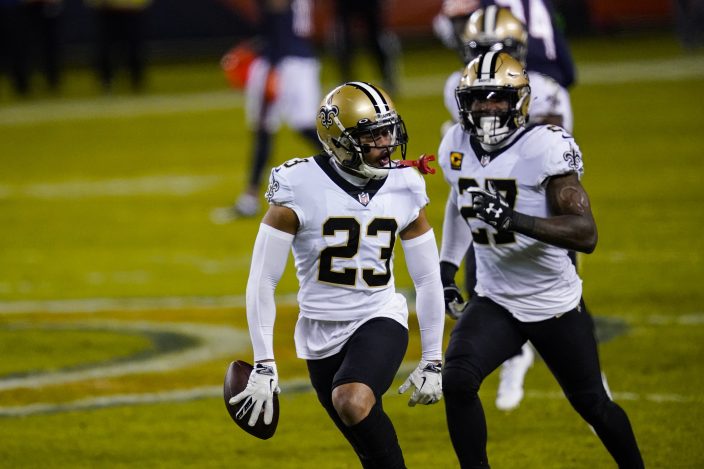 New Orleans Saints cornerback Marshon Lattimore (23) celebrates with strong safety Malcolm Jenkins (27) after an interception against the Chicago Bears in the second half of an NFL football game in Chicago, Sunday, Nov. 1, 2020. (AP PhotoCharles Rex Arbogast)

Lately, the Saints have had a pretty good excuse for not being able to run up the score on opponents. Receiver Michael Thomas, the 2019 AP Offensive Player of the Year, hasn't played since Week 1 because of an ankle injury, followed by a one-game suspension for a practice altercation with a teammate, and then a hamstring injury. Meanwhile, Emmanuel Sanders, who is arguably the Saints' second-best receiver, missed the past two games after testing positive for COVID-19.

But record-setting quarterback Drew Brees has been consistently efficient regardless of who his targets are, completing 112 of 149 attempts (75.2%) for 1,138 yards and seven TDs with two interceptions during the winning streak. And New Orleans has been able to lean heavily on Alvin Kamara, who currently leads the club in both yards rushing (431) and receiving (556).

“Definitely one of the best backs that I’ve ever played with. He can just do so many things and he’s so versatile,” said Saints tight end Jared Cook, who caught his team-leading fourth touchdown in Chicago. “He definitely brings an element to the game that we need in this offense in terms of switching it up and moving him around.” 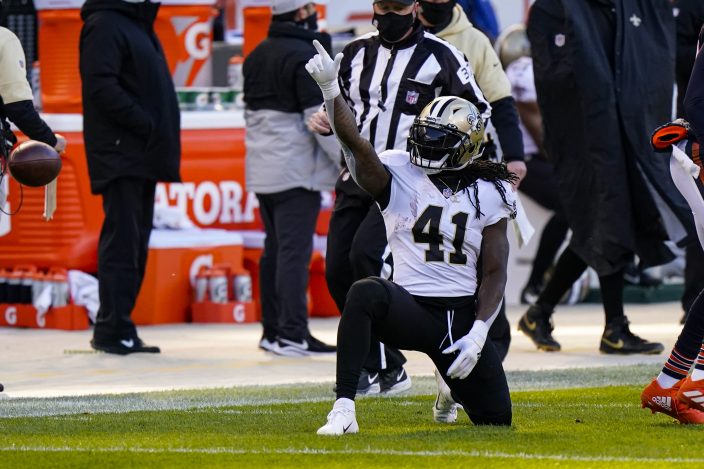 New Orleans Saints running back Alvin Kamara (41) signals for a first down after a run against the Chicago Bears in the first half of an NFL football game in Chicago, Sunday, Nov. 1, 2020. (AP PhotoNam Y. Huh)

And while the Saints' secondary has had its share of coverage busts, the defense as a whole has been solid, ranking eighth in total yards allowed (328.4) per game.

“Forget the numbers. We’ve got some of the top DBs: Malcolm (Jenkins), Marshon (Lattimore), Janoris (Jenkins) back there, Marcus Williams,” defensive back C.J. Gardner-Johnson said. "We got a team. The linebacker core we have, the D-line that (has) come together. We just worry about piecing it together and just keep it rolling, find a way to win. And that’s all we’re doing right now.” 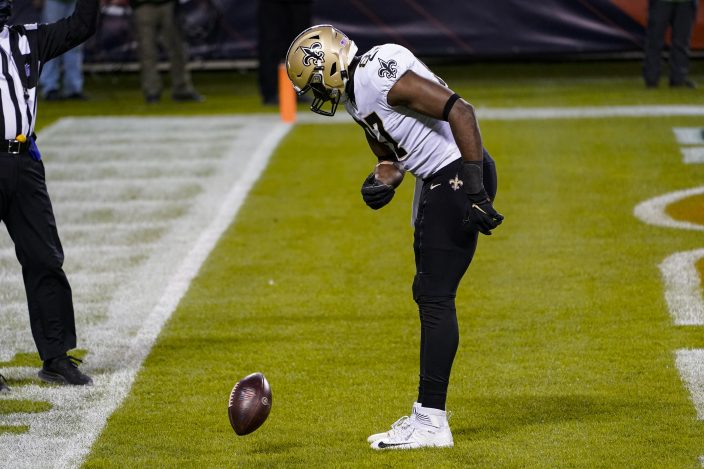 New Orleans Saints tight end Jared Cook (87) celebrates after a touchdown against the Chicago Bears in the first half of an NFL football game in Chicago, Sunday, Nov. 1, 2020. (AP PhotoCharles Rex Arbogast)

The Saints’ defensive front. Opposing offenses have struggled to run against New Orleans all season. The Saints held the Bears to less than 100 yards and have not allowed a 100-yard rusher in 50 games (including playoffs). New Orleans also sacked Bears QB Nick Foles five times, with four of those sacks by defensive linemen.

The Saints’ offensive execution on third down nosedived in Chicago. After converting their first two on the opening series, they failed on 11 straight and needed a couple of fourth-down conversions to sustain key drives. The Saints also scored touchdowns on only one of four trips inside Chicago’s red zone, in large part because of their third-down struggles.

Taysom Hill. The reserve QB and utility player had one of his better games this season, catching a 20-yard touchdown pass and adding a 10-yard run during the Saints’ winning series in overtime. He finished with two catches for 30 yards and five rushes for 35 yards. That’s about 9.3 yards gained per play.

Alex Anzalone. The linebacker played his lowest percentage of defensive snaps this season in Chicago and now will have competition for playing time after the Saints made a trade to acquire outside linebacker Kwon Alexander from San Francisco.

Defensive tackle Sheldon Rankins walked off the field with a knee injury Sunday. The timetable for his return is unclear.

The Saints travel to Tampa Bay on Sunday night for a game that could play a major role in deciding the NFC South. New Orleans beat QB Tom Brady's new club in the season opener in the Superdome and could seize control of the division by sweeping both head-to-head matchups.