Eric Ebron is tired of the critics who keep trying to nitpick the NFL's last unbeaten team.

“A lot of people say, ‘You all beat the Ravens, you all really are legit,’” the Pittsburgh Steelers ever-talkative tight end said after his team rallied past Baltimore on Sunday to improve to 7-0 for the second time in franchise history.

“I’m like, ‘But, we went 6-0. How are we not a legit unit?’" he added. "So, now that we beat the Ravens, more people understood that we’re legit, and we’re coming with our A-game every single time.” 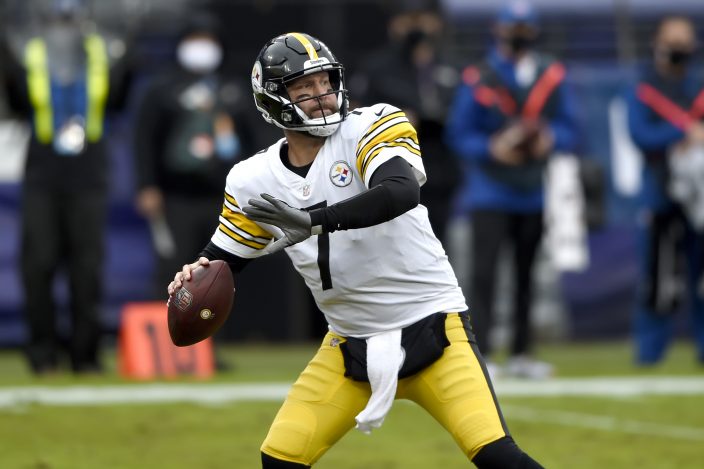 Pittsburgh Steelers quarterback Ben Roethlisberger throws a pass against the Baltimore Ravens during the first half of an NFL football game, Sunday, Nov. 1, 2020, in Baltimore. (AP PhotoGail Burton)

That's the thing, save for a blowout against Cleveland last month, Pittsburgh has been more decent than dominant. Yet they matched the 1978 team's mark for the best start ever on a day they were outgained by 236 yards, were frequently pushed around in the trenches on both sides of the ball and spent the first half on the receiving end of the kind of physical beating they typically dole out.

Coach Mike Tomlin repeatedly chastised his club for miscues while at the same time praising its perseverance. 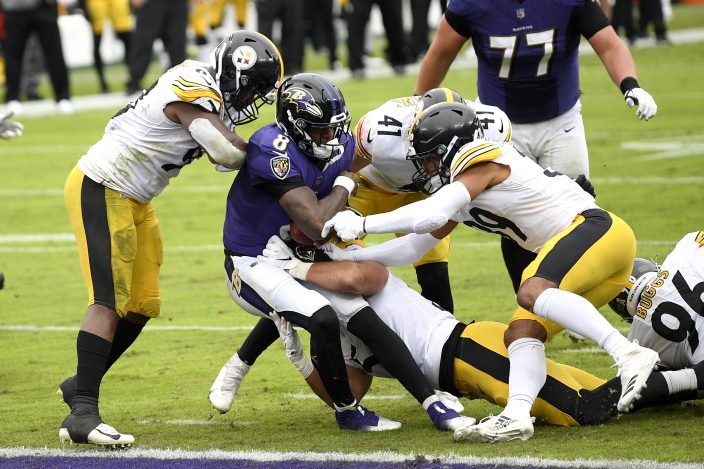 Baltimore Ravens quarterback Lamar Jackson (8) is stopped short of the goal line by a host of Pittsburgh Steelers defenders during the first half of an NFL football game, Sunday, Nov. 1, 2020, in Baltimore. (AP PhotoNick Wass)

Yet in the end, it didn't matter, not with the defense making up for in splash what it lacked in sturdiness. Pittsburgh forced Baltimore quarterback Lamar Jackson into a career-high four turnovers while getting contributions from players that were nowhere near the top of the depth chart in early September.

Inside linebacker Rob Spillane began his second career start with a pick-6 on Jackson on the game's first series. Rookie outside linebacker Alex Highsmith — who played as a defensive end in college at Charlotte — stepped in front of a pass by Jackson on Baltimore's first possession of the second half to set up a touchdown reception by Ebron, the spark that helped Pittsburgh claw out of a 10-point deficit.

When veteran defensive lineman Tyson Alualu exited early with an injury, second-year player Isaiah Buggs overcame some early wobbles to record five tackles, one less than he had in his previous 14 appearances combined. 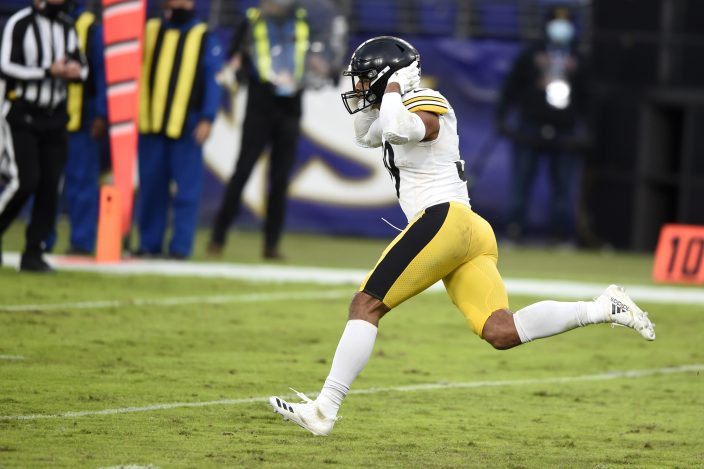 It's why quarterback Ben Roethlisberger took offense when asked what the impact of players not normally called on to make plays starts making plays.

“I would say, ‘Says who?'" Roethlisberger said. "Who says they’re not supposed to make big plays? We expect big things from everybody. ... It’s fun to see everyone contribute. That’s what makes this team special. Everyone does it. Everyone helps each other out.”

The Steelers have needed to rely on that depth repeatedly and are now entering a user-friendly stretch of their schedule. After three straight games against teams that were a combined 14-2 at kickoff, Pittsburgh's next three opponents — Dallas, Cincinnati and Jacksonville — are 5-17-1 before Baltimore visits Heinz Field on Thanksgiving night.

The chance of stubbing their toe is always there, but if the Steelers have proven one thing over the last two months, it's that they can stumble without falling.

“To be able to walk out of a building on the road, with a win, gives us a lot of momentum,” linebacker T.J. Watt said. "But like I said, there is going to be a lot on the film for us to learn from for this game.”

The Steelers largely abandoned the run following an anemic first half and opted to spread the Baltimore defense out by using five receivers and allowing Roethlisberger to draw it up as he went along. The results were quick passes that moved the chains combined with the occasional rainbow down the field that frequently drew flags. The Ravens were called for pass interference three times, including a 20-yard infraction on Marlon Humphrey in the fourth quarter that set up the winning touchdown.

Regardless of the outcome, giving up 265 yards rushing is a concern. The Ravens are the best rushing team in the league for a reason, but more pressing for the Steelers than the production is the way Baltimore consistently blocked so effectively.

Highsmith was considered a project of sorts when the Steelers took him in the third round. Instead, he's slowly earning his way into the rotation. He played a season-best 25 snaps against Baltimore.

Really? They're 7-0. If anything, they addressed a need for depth at inside linebacker by acquiring Avery Williamson from the Jets for next to nothing.

Defensive tackle and longtime team captain Cameron Heyward went down twice in the fourth quarter. Tomlin described the first instance as a cramp. The second appeared more serious, but Heyward was able to walk off under his own power. Alualu's inability to return after exiting so early is troubling.

140 — career victories by Tomlin, the most by a Black coach in NFL history. Tomlin surpassed Hall of Famer Tony Dungy with the win Sunday.

Monitoring their health after Baltimore's Humphrey tested positive for COVID-19. Assuming all goes well, the Steelers travel to Dallas to face the Cowboys and possibly old friend Andy Dalton next weekend. Dalton, who sat out a loss to Philadelphia on Sunday night because of a concussion, could return to face the Steelers. The former Cincinnati quarterback is 3-13 in his career against Pittsburgh.

One of Haiti's most powerful gang ...

Two races into his return to Joe G ...